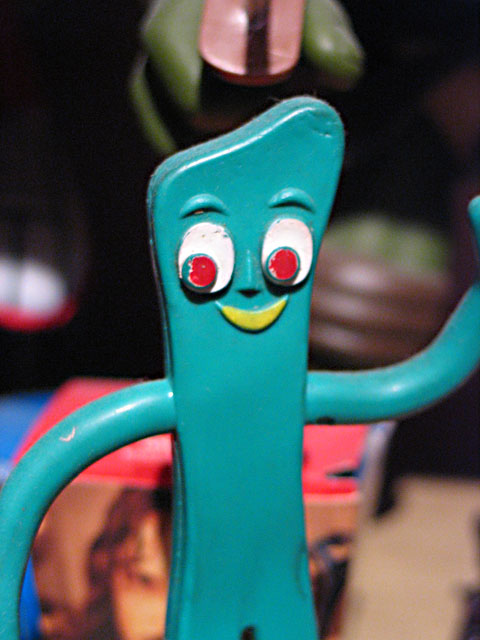 The GOP expects American workers to make like Gumby and stretch themselves.

The Gumby Act: The Republican Plan to Bend Workers Into Pretzels

The GOP wants to force ‘flexibility’ on employees, not bosses.

The forced flexibility act would enable employers to give workers comp time off instead of overtime pay. Republicans contend it would be the worker’s choice, but in reality bosses foreclose options when they make it extremely clear they want comp time selected.

A century ago, workers were a lot more “flexible” than they are now. Veritable Gumbies in the mills and mines and factories they were, distorting their lives to slog 10 or 12 hours a day, for six—even seven—days a week.

Then came the 40-hour week. And weekends. And eventually sick days. And paid vacation days. Now, bosses at mills and mines and factories regard these rules as coddling and believe the workers accustomed to them are resisting corporate demands.

The GOP has an app for that. It’s called the Working Families Flexibility Act. This legislation that the Republican majority in the U.S. House is expected to pass this week would force some old-time flexibility into 21st-century workers. The forced flexibility act would award bosses the power to “offer” compensatory time off instead of overtime pay. Bosses, not workers, would determine when the comp time could be taken. The proposal puts control in corporate hands, obliging wage earners to bend over backward for bosses exactly like their Gumby ancestors were compelled to.

Finally, in 1938, President Franklin Delano Roosevelt signed the Fair Labor Standards Act (FLSA) as part of the New Deal, which gave workers and families rights and security that previously had been exclusive to the wealthy.

FLSA enforces the 40-hour week with a simple measure. It requires employers to pay time and a half to wage earners for each hour worked beyond 40 in a week. That creates a financial disincentive for bosses to order work beyond 40 hours. That also creates a financial incentive for companies to avoid overtime pay by hiring more workers. That was a significant bonus during the Great Depression.

Employers still could require overtime when they needed it, but it cost them, the way it costs workers who must pay extra for child care or miss coaching a Little League game or forego Sunday dinner with parents.

Now, Republicans want to relieve corporations of their share of the cost. In fact, the GOP scheme enables corporations to profit on overtime at the expense of workers. It would reduce the financial disincentive of requiring work beyond 40 hours, which means it would also reduce the financial incentive to hire more workers. That would be a tragedy during the Great Recession.

The forced flexibility act would enable employers to give workers comp time off instead of overtime pay. Republicans contend it would be the worker’s choice, but in reality bosses foreclose options when they make it extremely clear they want comp time selected.

And they’ll want workers to “choose” comp time. That’s because workers won’t be able to specify when they’ll take the compensatory time off. Bosses will have veto power on those requests. And as workers accrue more and more hours of overtime—up to 160 a year—to be compensated later as time off, the corporation retains an increasing share of the value of their labor.

With overtime pay, the worker gets the money in the next paycheck and spends or saves it as he pleases, earning interest if he banks it. Under the GOP forced flexibility proposal, the boss can deny time off requests for as long as a year, after which the company must pay the wage earner for the extra time worked. By then, the corporation has kept the workers’ earnings, and the interest on them, for 12 months.

And if the company goes bankrupt before paying for the accumulated overtime, the GOP provides no protection for workers. Workers would lose the earnings that they would have received immediately if they had been paid time-and-a-half in the next check.

The GOP is hyping their forced flexibility bill as a measure to help women. On websites and blogs popular among women, the GOP bought ads asking Democrats if they will “stand up for” working moms by forcing women to contort themselves to employers’ whims. The same party that defeated equity measures for women like the Equal Rights Amendment and the Paycheck Fairness Act now wants the women who voted against them big time in the last election to believe the GOP forced flexibility act is good for them.

Republicans are right that women need flexibility it their work lives. The flexibility to earn 100 percent of what men do in the same jobs, instead of 23 percent less, would be great. But not so great would be a federal law giving bosses the flexibility to force women to work extra hours with a vague promise of compensatory time off some day in the future if the boss feels like granting it.

The GOP forced flexibility act is part of a list of proposals House Majority Leader Eric Cantor, R-Virginia, calls “Making Life Work.” That’s right, Republicans intend to make life nothing but work. No eight hours for sleep. No eight hours for anything you will. Just work, Gumby, just work.