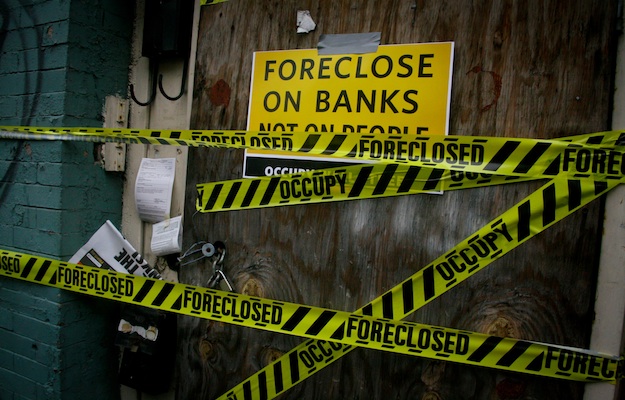 Organizers with Occupy Our Homes want the attorney general to prosecute the banks responsible for the housing meltdown.

Foreclosing in on D.C.

Since the housing bubble burst in 2007, some 4.8 million Americans have lost their homes to foreclosure. According to data released in April, more than one-third of those subject to foreclosure proceedings at the height of the crisis were the victims of possible bank errors or illegal practices. But the Treasury’s Office of the Comptroller of the Currency decided in January to simply settle with the banks for $3.6 billion. Most foreclosed-upon borrowers will receive less than $1,000 in the settlement—even if they lost their homes.

It’s this kind of indifference to the plight of underwater homeowners that Occupy-aligned anti-foreclosure groups are trying to combat.

Starting May 18, Occupy Our Homes and the Home Defenders League are leading a week of actions with two goals: real mortgage relief and the prosecution of lenders for fraud and negligence. In addition to community actions across the country, activists will converge in Washington to protest Attorney General Eric Holder’s comments in March that such prosecutions could destabilize the economy—essentially, a claim that banks are “too big to jail.”

Organizers with Occupy Our Homes hope the actions will shake the federal government out of complacency. “The crisis is far from over,” the group asserts on its website. “It’s more important than ever for us to take action.”