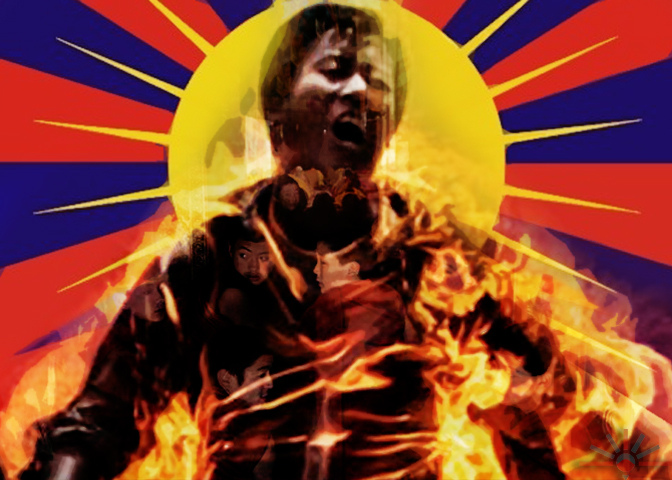 117 Tibetans have set themselves on fire since 2009 in protest of the Chinese regime (AK Rockefeller/Flickr).

The Tragedy of Self Immolation: No One Cares

If a monk lights himself on fire and nobody watches, has he made a protest?

If self immolation no longer works as an agent for change, then is it still worth the price? Has it been reduced to mere suicide by fire?

Self-immolation isn't what it used to be.

This ultimate form of protest became global news in 1963 when the venerable monk Thich Quang Duc set himself ablaze in the middle of Saigon, Vietnam, protesting religious oppression. Doused in gasoline, the monk sat serenely in lotus position and lit a match. A bird of paradise thus blossomed and bloomed, and quickly charred his body.

The photographer Malcolm Browne captured Thich Quang Duc's fiery renouncement of the mortal coil, the image quickly becoming an icon of the Vietnam War era. The term “self-immolation,” in fact, entered into common English usage after his death, which led to a coup d'etat that toppled the pro-Catholic Ngo Dinh Diem regime.

Half a century later, to die by fire in protest registers little more than a media blip.

As of this writing, 117 Tibetans have set themselves ablaze since 2009 in a series of protests against Chinese rule. The most recent incidents came in April, when two young Tibetan monks and a lay Tibetan woman set themselves on fire. There was little coverage of their deaths.

Indeed, with the exception of Mohamed Bouazizi, the Tunisian fruit vendor who set himself on fire and thus sparked what became known as the Arab Spring, self-immolation has by all accounts become a failed form of protest as an agent of change. Whether in Syria or Palestine, Greece, Italy or Vietnam, individuals continue to go up in flames as crowds look on. Since Bouazizi, in fact, 150 more Tunisians have set themselves on fire protesting the new government, according to al-monitor.

“All the Tibetans who resort to self-immolation do so because they feel they have no other way to make China and the rest of the world listen to their country's call for freedom,” Byrne-Rosengren, director of the London-based advocacy group Free Tibet, told Radio Free Asia last month.

Alas, China has turned a deaf ear to their cries, while the world media has averted its eyes.

Aristotle once observed that the plot of a tragedy should be so framed that, even without witnessing the events, simply hearing of them should fill one with “horror and pity”—even lead to insight and action. But the amphitheater of the 21st century has fallen into decay, scattered and fragmented into a multitude of media platforms. There are too many actors in too many theaters and their tragedies—overwhelming, lacking in context, incoherent, truncated or badly reported—have lost their grip on the human psyche.

Studies about desensitization of the modern mind are aplenty, but the general consensus is that over-saturation of images and narratives of violence have resulted in a collective numbness. A profound act of public death cannot hope to sway a world in which horror itself has lost its power.

What we want instead is entertainment, and what we gravitate toward and react to, more often than not, is profanity.

A year after Bouazizi went up in flames in Tunisia, an unknown amateur filmmaker named Nakoula Basseley Nakoula,” aka “Sam Bacile,” inflamed the Middle East with incendiary video clips ridiculing the prophet Muhammad. His film turned the Arab Spring of 2011 into the Autumn Rage of 2012, resulted in the death of an American ambassador in Libya, and continues to be a bone of contention in Washington.

The cynical observer can't help but wonder: If self immolation no longer works as an agent for change, then is it still worth the price? Has it been reduced to mere suicide by fire?

At its most profound the act stands as the highest form of human compassion, a confirmation of life by giving up one's own. At its most incoherent self-immolation becomes more expressive of the frustration of the powerless. The individual, enamored by death, possessed by anger, elicits neither horror nor pity but cynicism. After all, to burn with passion is very different than to be consumed by rage.

Fire—this gift and curse to humanity—is a terrifying beauty. Contained, it hints at elegance, cooks our food and propels our world. Out of control, it engulfs body and soul. It seduces. It overpowers. And it destroys.

Potential self-immolators may want to rethink their relationship with fire. In a world where individuals leverage more power online than in the public square, it may be that to live burning with desire to bring attention to one's cause—regardless of the oppression and humiliation—is the real challenge to becoming actual agents of change in the world. So why not live instead? And find new ways to force the world's attention once more back onto the stage—and evoke pity and horror in us all.

To burn with that desire, to call our attention and hold our gaze until we weep—isn't that worth living for?