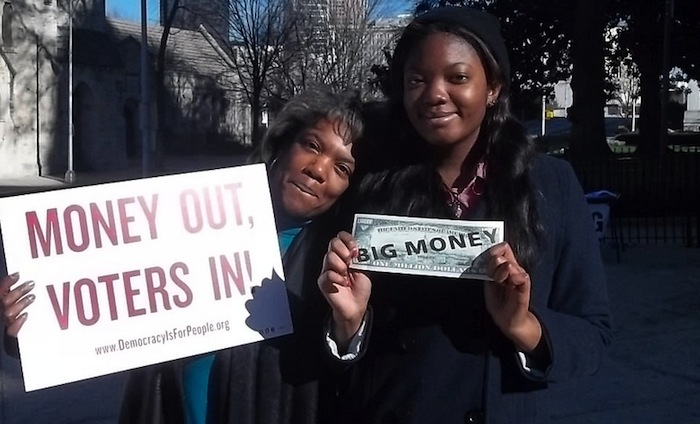 At a 'Money Out, Voters In' rally in Atlanta, Stacey and Alyssa Hopkins protest the post-Citizens United flood of corporate money into politics (UnitedForThePeopleGA/Flickr/Creative Commons).

How to Handle the IRS Scandal? Reverse Citizens United

The real moral of the IRS story is that election finance needs serious reform.

Corporations can’t 'suffer' illness. They can, however, kill democracy.

Targeting Tea Party groups for scrutiny, even if through incompetence, not intention, turned the IRS into a nasty carbuncle on the governing body.

Carbuncles are never good. Strength-sapping, painful, ugly, they’re to be avoided. Here’s the thing, though: while every politician in Washington is cursing the carbuncle, hardly one has complained of the cancer killing the patient. Allowing unlimited, unaccounted-for corporate spending in elections is a malignancy threatening the life of the republic. Permitting Tea Party, left-wing, libertarian, middle-of-the-road—whatever—groups to define themselves as untaxed social welfare organizations that may accept unlimited, untaxed, secret corporate gifts and sponsor political ads is a sarcoma on democracy.

Nobody wants the IRS singling out applicants based on politics. The American people do, however, want someone, if not the IRS, someone else, somewhere to do something about the perversion of election finance. The IRS is hardly a good candidate for that job. The Securities and Exchange Commission (SEC) could help. A constitutional amendment would be better.

The IRS has some regulatory power. In the Tea Party case, the IRS was examining applications for “social welfare” or 501(c)(4) status, which is commonly used to circumvent campaign finance laws.

The tax code defines 501(c)(4) groups like this: “Civic leagues or organizations not organized for profit but operated exclusively for the promotion of social welfare.” These are different from charity organizations, called 501(c)(3), such as food banks and homeless shelters. And they are different from political outfits, which have their very own place—Section 527—in the tax code.

Over the past decade, an increasing number of political groups sought “social welfare” status instead. That’s because of a 2001 law requiring political outfits to disclose their donors. “Social welfare” organizations don’t have to do that. Politicized “social welfare” groups sprouted even faster after the U.S. Supreme Court decided in the Citizens United case in 2010 that corporations are people free to spend unlimited cash in elections.

“Social welfare” groups provided corporations with the ability to spend untold millions on candidates while keeping that a secret from customers and shareholders.

But here’s the problem: The tax code requires these groups to work “exclusively” to promote social welfare. Regulations permit some political activity but forbid these groups from functioning primarily for politics.

Despite that, many of these groups, from the right-wing Crossroads GPS to the lefty Priorities USA, clearly operate primarily for politics. They spent hundreds of millions in the last Presidential election. Watchdog groups have filed a dozen complaints in the past two years objecting to this apparent violation. The IRS never responded.

Not much enforcement there.

The IRS made a little effort in 2011, but backed off when GOP leaders complained.

Gifts to charities are tax exempt, but those to “social welfare” groups are not. Well, they’re not supposed to be. The IRS sent letters to a group of big donors two years ago informing them that gifts to “social welfare” groups may be subject to tax. Immediately, Republican senators Orrin G. Hatch and Jon Kyl accused the IRS of partisanship. After which the IRS “folded like wet cardboard,” said Sheila Krumholz and Robert Weinberger of the Center for Responsive Politics in a New York Times article.

Another government entity that could help cure the dark money disease is the SEC.

No enforcement there either, though.

Languishing at the SEC is a proposal to require publicly traded companies to disclose the money they pour into these “social welfare” groups—funds described as “dark money” because the source is concealed. The idea is that shareholders have a right to know how their investment is used. And it’s a popular concept, with more comments filed on this proposal than on any other suggested rule in SEC history—half a million—the vast majority in favor.

One method of enforcement is on the move. It is a proposed amendment to the U.S. Constitution that would reverse the Citizens United decision that corporations are people with First Amendment rights to free speech, which includes spending unlimited money on politics. Already, 13 states and more than 300 municipalities have called for approval of the Democracy is For People Amendment. It was introduced in Congress by Independent Vermont Sen. Bernie Sanders and Florida Democratic Rep. Ted Deutch.

It says natural persons who are citizens of the United States may make campaign contributions. Corporations do not fit that definition of human beings, and as a result would be prohibited from making political gifts.

It would allow contributions from Political Action Committees, which are comprised of human beings who get together and donate under the IRS’ political committee rules—section 527. So groups of union members or wealthy CEOs could continue donating.

Move to Amend activists were heartened by a Pennsylvania judge’s recent decision that corporations are not people and thus do not have a constitutional right to privacy. Washington County President Judge Debbie O’Dell-Seneca is no Supreme Court justice. But she understands that there’s an important distinction in the fact that people can be heartened while corporations can’t be. Her decision included this analysis:

It is axiomatic that corporations, companies and partnership have no “spiritual nature,” “feelings,” “intellect,” “beliefs,” “thoughts,” “emotions,” or “sensations,” because they do not exist in the manner that humankind exists…They cannot be ‘let alone’ by government, because businesses are but grapes, ripe upon the vine of the law, that the people of this Commonwealth raise, tend, and prune at their pleasure and need.

Corporations can’t “suffer” illness. They can, however, kill democracy.

To stop toxic corporate interference in elections, the American people could demand that the IRS, which is supposed to be non-partisan, decide exactly what constitutes political activity. They could hope the SEC will do the right thing. What they should do, however, is pass a constitutional amendment clarifying once and for all that corporations are not human and can’t usurp the rights of human beings.