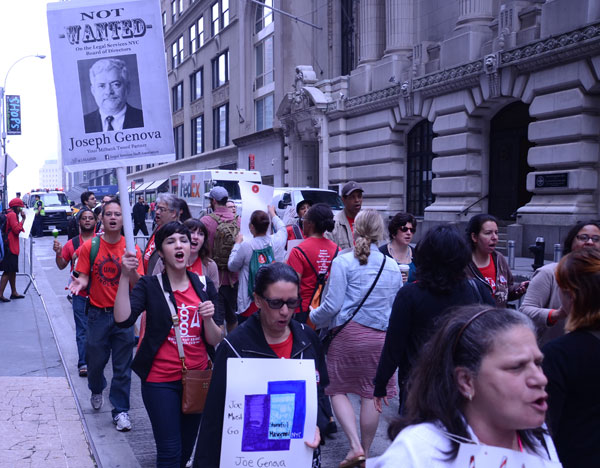 Workers with the Legal Services Staff Association union picket outside the corporate law office of Joe Genova, the chair of the Legal Services NYC board, which has presented a contract with heavy salary and benefit cuts. (Erik Forman)

Striking Back at the Sequester

They work at Legal Services because they believe in the cause. Walking out of the courtroom and onto the picket line was a difficult choice. No one wanted to leave their clients’ cases hanging.

Manhattan rang with a labor-themed rendition of Frère Jacques yesterday morning as over 100 members of the Legal Services Staff Association and their supporters picketed the offices of corporate law firm Milbank Tweed. But it wasn’t sung in the low tones of a lullaby. The workers wanted to make their voices heard 40 floors up by one of the partners of the firm, Joe Genova, chair of the board of Legal Services New York City.

Exactly two weeks earlier, more than 200 lawyers, paralegals, process servers, and other staff employed by Legal Services NYC had walked off their jobs after working without a contract for over a year.

Typically, the workers spend their days fighting on behalf of the most vulnerable members of our society. They defend poor and working people from evictions and foreclosure, fight for benefits for people with disabilities and the unemployed, aid victims of domestic violence in obtaining orders of protection, square off against predatory debt collection agencies, advocate for those suffering from HIV and AIDs, guide newcomers to the United States through the broken immigration system and, in general, provide a helping hand to those whose lives are torn apart by Kafkaesque government and employer bureaucracies.

In one case, Legal Services defended a man who was evicted from his apartment by the New York City Housing Authority in the middle of winter, even though he was paralyzed from the waist down. The first night, he slept in a hallway. Legal Services workers saved his possessions from destruction by the Housing Authority and helped him get moved back in.

Most of the highly-trained legal workers decided to forego lucrative careers in private-sector law. They work at Legal Services because they believe in the cause. Walking out of the courtroom and onto the picket line was a difficult choice. No one wanted to leave their clients’ cases hanging. But after reviewing management’s demands, workers felt they had no other option.

The board sought a pay cut equivalent to two years of seniority, an increase in healthcare costs that could total thousands of dollars a year, a 29 percent reduction in employer contributions to retirement funds, a freeze on cost-of-living pay increases. These cuts would remake the working environment at Legal Services NYC along the lines of the revolving door model that reigns in the corporate firms LSNYC’s board members run in Manhattan, doing irreparable harm to the organization’s ability to advocate effectively for its low-income clients.

Ian Davie, one of the striking legal workers, explains that with cuts to healthcare, “When you reach a certain point, you can't continue taking your kids to the doctor, or you can't afford to go to the doctor. You can’t raise your kids here in New York, so you have to find other work. We think it's really about turning this into a high-turnover workplace. The cuts are so drastic that they will undermine our ability to serve our clients.”

Despite an escalating protest by a united workforce and broad support for the strike in the community, the bosses haven’t budged. Gallingly, they have retained counsel from the notoriously anti-union law firm Seyfarth Shaw, known for the role one of its founding partners played in drafting the anti-union Taft-Hartley Act in 1947, as well as for busting unions at Yale University and countless other public and private sector entities.

The bosses live in a different world than the workers, says Davie: “Milbank Tweed, where the chair of the board works, is downtown at Chase Manhattan Plaza. Michael Young, the vice chair, works in the new New York Times building in Midtown Manhattan. They are very far from our clients. In his ten years as board chair, Joe Genova has never even visited our offices. We think he just doesn’t understand the work we are doing. Their clients are large banks. Our clients are the poorest of the poor, often being sued by those banks.”

Compensation for partners at Milbank Tweed—including Mr. Genova—ranged from $2.44 to $2.57 million in 2011, placing them easily within the richest 1% in the United States. Genova is married to a general counsel at JPMorgan Chase, who is also treasurer of the International Swaps and Derivatives Association.

In what has become a familiar refrain from public-sector bosses, management blames sequestration. In response to the strike, the board releasing a statement saying, “We are disappointed that the Legal Services Staff Association (LSSA) voted to strike rather than accept our proposal to respond to a 50 percent drop in Federal funding ($8 million total) with necessary changes to healthcare and retirement programs. Without those changes, we will be forced to lay off as many as 50 people by the end of 2014.”

It’s a scene that has played out thousands of times across the United States since Congress and the Obama administration signed off on a “sequestration” deal that will cut $1.2 trillion from the federal budget. The funding reduction means a death of a thousand cuts to the already-suffering U.S. working class. It will literally kill Medicare patients who will be denied cancer drugs, stunt the lives of 1.2 million students who lose access to Head Start and other programs, lay off inspectors responsible for ensuring mine safety, end important scientific and medical research, deny justice to the poor by furloughing public defenders and shrinking Legal Services staffing, and destroy at least 750,000 jobs this year. The list goes on and on.

The 270 members of the Legal Services Staff Association have launched labor’s first strike against sequestration. Rejecting management’s Chicken Little financial projections as a red herring, they point out that the organization will have over $10 million in cash at the end of the year, enough to cushion the blow of federal funding cuts while money can be raised from other sources. And on May 1, the union negotiating team offered to pay 2 percent of salaries toward healthcare rather than see insurance slashed, which would have created the exact same cost savings as management’s healthcare proposal. The bosses rejected the cost-saving compromise, leading observers to wonder what the layoffs are really about.

Three-year Legal Services veteran Isabel Rivera says, “The idea behind the contract [from management] is not financially motivated, it’s ideologically motivated. We’re taking a stand, we’re standing up for ourselves, and for our clients.”

There is a bitter irony at the root of the current conflict. The Legal Services Corporation distributes funds to over 100 nonprofits like Legal Services NYC across the United States. Congress created LSC in 1974 with the approval of Richard Nixon, in order to integrate the grievances of poor and working people into the judicial system. It seemed like a wise investment with the riots and rebellions of the 1960s and early 1970s fresh in politicians’ mind. Even Judge Lewis F. Powell, author of the Powell Memo, now infamous as the charter document of neoliberalism, thought it was a good idea. The broad ruling class consensus behind the creation of Legal Services reflected the reigning ideology of corporate liberalism.

Four decades later, most Democrats and Republicans are united around a new ideology of shredding the New Deal social safety net through sequestration and other forms of austerity, while waging a war of attrition against the labor movement. Sequestration is only one thrust in a much broader assault on poor and working people. In fact, it may be capitalists’ endgame, as even the mild-mannered civil servants at organizations like Legal Services Staff Association and the NLRB come under attack.

The workers at LSNYC aren’t willing to sit back and watch the erosion continue. They have a better idea: Make common cause with those who rely on public services, and strike back.