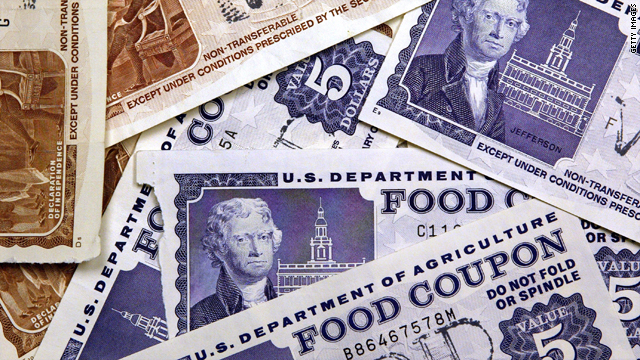 The House is considering $20 billion in cuts to the food stamps program over the next 10 years. (Google Images/Creative Commons)

Food Stamps on the Chopping Block

Washington’s attack on the poor continues as the Senate votes for big cuts to food aid.

“If the Democratic Party doesn’t stand with the poor and the vulnerable then I don’t know what the hell we stand for," says Rep. Jim McGovern.

On Monday evening, the Senate voted to cut roughly $4 billion from the Supplemental Nutrition Assistance Program (SNAP), more commonly known by its former name, food stamps. The 66-27 vote on the farm bill—a massive omnibus bill that funds federal agricultural and food policy through the Department of Agriculture—could pave the way for even more substantial cuts to SNAP to take place. By the end of the month, the House is expected to take up its own version of the farm bill, which includes a staggering $20 billion in cuts to the program over the next ten years. Depending on how the House votes and the way in which the bills are reconciled, millions of food stamp beneficiaries could be at risk.

While not as drastic as the House’s version, which substantially alters eligibility requirements for the program and threatens to throw millions off the program’s rolls, the Senate’s cuts to SNAP are far from negligible. The legislation passed includes new limits on SNAP eligibility for college students and restrictions on the ability of states to disburse food stamp benefits in conjunction with the low-income heating-assistance program. It even includes a seemingly non-sequitur provision that would prevent lottery winners from receiving benefits.

Only two Democratic senators voted against the bill—Jack Reed and Sheldon Whitehouse, both of Rhode Island. Supporters of the Senate bill included liberals who oppose the cuts in the House version, like Sen. Tom Harkin (D-Iowa). Many of these Democrats seemed willing to accept some SNAP cuts in exchange for making some progress on passing a farm bill.

“While I dislike the SNAP cuts in the Senate bill, I believe that Senator Stabenow”—the chair of the Senate Agriculture Committee—“has done her best to minimize the SNAP cuts, especially relative to the House bill, which indiscriminately and needlessly slashes the SNAP program,” Harkin told In These Times.

The focus now turns to the House, which could take up its version of the farm bill as early as June 17. The massive cuts in its bill come from eliminating the “categorical eligibility” option offered by some states. The existing provision allows households with gross incomes above the eligibility requirement, but with disposable incomes below the federal poverty line, to qualify for SNAP benefits—a situation that often applies to households with high child-care or housing costs. The Congressional Budget Office has estimated that this change in eligibility requirements would eliminate benefits for almost two million Americans, many of whom are children and the elderly. Eliminating “categorical eligibility” would also mean that hundreds of thousands of children who receive free school meals—in particular, those whose eligibility is based on receipt of SNAP benefits—would lose access to that program.

One of the most common criticisms of SNAP, whose number of beneficiaries has increased by 70% as a result of the economic crisis, is that the program has become too bloated and increasingly subject to fraud. But Kari Hamerschlag, a senior food and agriculture analyst at the Environmental Working Group, a non-profit research and advocacy organization that focuses on public health and the environment, disputed those charges. She acknowledged that unemployment and the expansion of jobs in low-wage sectors have meant that more people need food stamps than ever before. But she said the prominence of critiques that target the program’s effectiveness have more to do with the political interests of legislators than with any meaningful problems with SNAP.

“It’s actually one of the most efficient programs we have, and one of the programs with the least amount of fraud,” Hamerschlag said. “In fact, the crop insurance program [which both versions of the farm bill expand] has far more fraud than the SNAP program. The difference between the two is that if you receive SNAP benefits, there is a means test and it’s always the very poor that benefit from this program. It’s very different from the crop insurance program where the very rich can benefit from the program.”

At this stage, it will likely be difficult to prevent any cuts from taking place. Rep. Jim McGovern (D-Mass.), who has emerged as one of the most vocal opponents of the cuts in Congress, conceded that “the odds are against us.” McGovern has co-authored an amendment to restore funding to SNAP, which has garnered the support of over 130 Democrats in the House so far.

In an interview with In These Times, McGovern blamed the Republican Party’s hostility toward social spending and general ignorance of the issues facing low-income people for the severity of the cuts. But he also expressed frustration with members of his own party for failing to speak out on the issue. “If the Democratic Party doesn’t stand with the poor and the vulnerable then I don’t know what the hell we stand for,” McGovern said.

“There’s this view that there’s no political consequence, if you cut programs to hurt poor people, then you won’t lose an election,” McGovern said. “Whereas if you overturn a tax cut or if you vote against a trade agreement or vote against the gun lobby, there’s a political consequence. I think many of my colleagues are gambling that if they vote to chip away at the safety net in this country, then nobody will notice, nobody will care, [and] that they won’t lose their election.”

While the response to SNAP cuts in Washington has so far been limited, opponents of the cuts are planning on ramping up their pressure on Congress in the coming weeks.

Twenty-six members of Congress, including McGovern, have pledged to live on a SNAP budget between June 13 and 19. They will be joined by representatives from an array of anti-poverty organizations, like the Food Research and Action Center, NeighborWorks America, the American Association of Retired Persons and religious groups.  Meanwhile, on June 17, the earliest date that the House could take up the farm bill, Progressive Democrats of America (PDA) will hold a series of demonstrations across the country calling on influential Democratic members of Congress to prevent the cuts from taking place. PDA is holding actions at the district offices of Pelosi, Hoyer, Democratic National Committee Chairwoman Debbie Wasserman-Schultz (D-Fla.), Assistant Senate Majority Leader Richard Durbin (D-Ill.), Dianne Feinstein (D-Calif.) and Henry Waxman (D-Calif.).

In particular, PDA’s actions aim to connect the massive cuts to SNAP with a $5.1 billion increase in military spending the House is simultaneously considering as part of the upcoming National Defense Authorization Act.

“The organizing we’re doing is to make those connections to show wasteful military spending in the face of worsening unmet human needs,” PDA Executive Director Tim Carpenter told In These Times.

PDA, like Rep. McGovern and others, is pushing to restore all funding to SNAP. If that effort fails, McGovern said he plans to oppose the bill in its entirety. In that scenario, blocking cuts to SNAP in the House could depend on an unlikely alliance of Democrats and Tea Party Republicans defeating the bill. Ironically, the House’s right-wing fringe—a voting bloc of about 50 Republicans who believe the spending cuts do not go far enough—may prove instrumental in postponing cuts to food stamps.