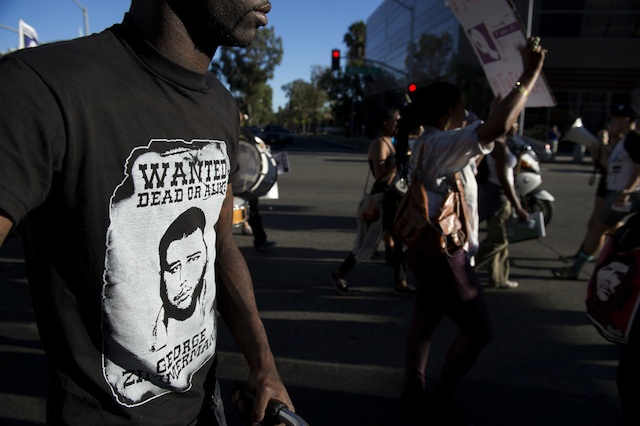 A man protesting the George Zimmerman verdict in Beverly Hills wears a shirt with Zimmerman's face on it. (Robyn Beck / Getty Images)

What Would Real Justice for Trayvon Martin Look Like?

The acquittal of George Zimmerman made us furious. But will a hate-crime conviction make anything better?

Certainly George Zimmerman should be held accountable for his actions in some meaningful way. But even federal conviction of Zimmerman would not produce racial justice.

A nightmarish convergence of factors combined to deprive 17-year old Trayvon Martin of his life and to exonerate George Zimmerman, the man who killed him—in the course, Zimmerman claimed, of protecting the gated community in which both he and Martin were living. The case speaks to an enduring reality of American life: socially-engineered fear of Black people—particularly male—based on false presumptions about their inherent criminality provides a legal license to kill. The verdict has led the NAACP and many others to call for a federal hate crimes prosecution of Zimmerman. But here, too, we must confront another unpleasant reality: A hate crimes conviction would not produce racial justice. To seek justice for Trayvon—and countless others victimized by systemic bigotry—requires that we come to grips with the root causes of such violence.

From the start, implicit racial bias haunted Trayvon’s killing. It haunted the reluctant and very late arrest of Zimmerman by Sanford, Florida police, more than 40 days after he shot the unarmed teen. It haunted the clumsy last-minute decision by special prosecutor Angela Corey to charge Zimmerman with second-degree murder, then the jury selection and the half-hearted prosecution, and finally, the verdict of “not guilty.”

Implicit racial bias is deeply embedded in Florida’s “Stand Your Ground” gun laws, enacted at the urging of the National Rifle Association (NRA), that provide, among other things, justification for legally-sanctioned vigilante action under the guise of self-defense. Although Zimmerman’s legal team didn’t raise “Stand Your Ground” in his defense, it was written all over the trial. Indeed, presiding Judge Debra Nelson’s jury instructions urged the all-female group to consider the law during deliberations.

The same embedded racism now suffuses the post-verdict framing of Martin by outlets ranging from The Drudge Report to Fox News as a thug responsible for his own death. Racism also saturates the repeated suggestion by mainstream commentators such as Richard Cohen and Kathleen Parker that it is only “common sense” to fear young Black men. This discourse feeds the aura of presumptive criminality that cloaks Black men, hoodie or no hoodie.

The equation of blackness with criminality is not just a present-day prejudice. It is foundational to this country’s legal system and justice practices. No sooner was slavery abolished than overtly racist Black Laws were instituted, followed by an explosive growth of prisons and a horrific convict-lease system that effectively re-institutionalized slavery. In 1883, the great statesman—and former slave—Frederick Douglass noted “the general disposition in this country to impute crime to color” and spoke of the tendency of an infuriated populace to “take the law into their own bloody hands.”

Despite the powerful gains of the Civil Rights Movement in the mid-20th century, the presumption of Black criminality remains pervasive. As Michelle Alexander’s The New Jim Crow so devastatingly illustrates, that presumption fuels mass incarceration, racial profiling, selective law enforcement (New York City's Stop and Frisk police intiative is but one egregious example) and the growth of an increasingly privatized correctional system that accommodates the youth of color shuttled through the school-to-prison-pipeline.

Countless activists, educators and public-policy analysts work tirelessly to document these realities and rouse public concern about our systemic civil rights crisis. But many of us don’t want to acknowledge it. Assertions that, because we have a Black president, we now live in a “post-racial” society set us back and deny mounting evidence of profound and widening racial inequality.

Now, the growing outrage at the “not guilty” verdict for Zimmerman has fueled demands for the federal government to step in where Florida law failed to value the intrinsic worth and rights of a young, Black man who was carrying snacks and making his way home. Florida authorities refused to prosecute Zimmerman under that state’s hate crime laws; perhaps now the Department of Justice will do so. And so hate crime law has once again begun to galvanize the public imagination, as if it could somehow bring justice to Trayvon Martin and, by extension, to all people of color who are presumptively criminalized.

Certainly George Zimmerman should be held accountable for his actions in some meaningful way. But even federal conviction of Zimmerman, which is by no means a sure thing, would not produce racial justice.

Why? The “hate crime” frame depicts racist violence against marginalized and vulnerable communities as a departure from the norm, focusing instead on “extremists” who exhibit dangerous forms of racial bias. But implicit racial bias permeates respectable structures and institutions of society and is perpetuated by some of their most esteemed and celebrated members. Researchers, activists and organizations such as Amnesty International, the American Friends Service Committee, and the National Coalition of Anti-Violence Programs have long documented widespread misconduct and abuse by law enforcement of the communities that are most targeted for hate violence, including people of color and LBGTQ populations. Far from preventing hate violence, police are often its main perpetrators. Because it doesn’t make us confront racism as commonplace, the hate frame won’t produce the deeper insight needed to produce authentic, not just rhetorical, racial justice in this country.

Beyond individual accountability, there is also a question of broader responsibility—the responsibility that belongs to all of us, and especially to White people. The Zimmerman verdict demands that we dig beneath the easy, comforting rhetoric of “colorblindness” and “post-racialism” to witness and address the massive violence routinely perpetrated against communities of color. That means addressing a deeply engrained and constantly reinforced belief system that indisputably connects color and criminality, not just this or that verdict.

It’s not easy to say exactly what such justice would look like. Different communities may choose different approaches. What’s key is that they work to address the social and economic conditions in which ideas of superiority, inferiority and violence take root. Some community organizations, such as Chicago’s Project NIA, are bringing “transformative” concepts of justice to public attention and translating them into practical, community-based initiatives. Project NIA provides special initiatives for young women and young men of color—both victims and perpetrators of violence—and their families, designed to help interrupt cycles of violence, prevent entanglement with the criminal legal system and strengthen community support for alternatives to incarceration. The group also has active campaigns to expunge juvenile records, close Illinois youth prisons and create alternatives to incarceration.

Project NIA’s work is only one example of community-based justice work. Other initiatives around the country work to confront both individual and structural violence, make communities safer and dramatically reduce reliance on arrest, detention and incarceration.

While the NRA may solidify its ethically bankrupt power by encouraging an ethos of enmity and expendability, great leaders for social change—King, Gandhi, Chavez, Huerta, Malcolm X, Archbishop Oscar Romero—have always rightly noted the importance of simultaneous forms of transformation at both individual and structural levels.

Where are the civic and faith-based leaders calling for such transformation today?   Where are today’s risk-takers who are willing to step out into the great storms of fear—those who are willing to call not for more policing, punishment , and retribution, but for justice that not only names and confronts, but works to transform and heal the terrible wounds of structural racism in this purportedly “colorblind” society?

Even as we mourn the loss of Trayvon Martin and so many other young people of color, let us reflect on the collective duty before us: valuing their lives by dismantling all the neutral-sounding ways in which racism manifests—anti-immigrant laws, gutting of the Voting Rights Act, voter suppression efforts, Stop and Frisk police practices, race-based mass incarceration and more. If we’re serious about racial justice, we have to embrace measures equal to the challenge.

Kay Whitlock is a writer and activist focusing on issues of structural violence in the United States, with special emphasis on the intersections of race, gender, sexuality, class, and citizenship status. She is the author of Reconsidering Hate: Policy and Politics at the Intersection, a Political Research Associates discussion paper, and co-author with Joey L. Mogul and Andrea J. Ritchie of the book Queer (In)Justice: The Criminalization of LGBT People in the United States.