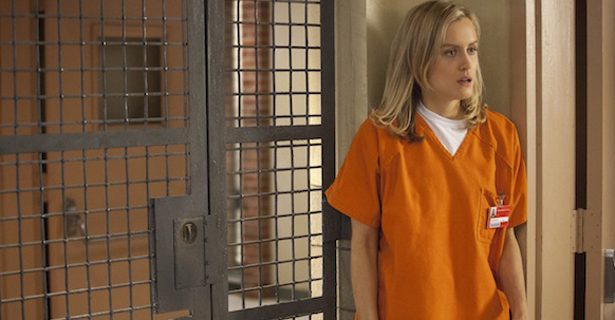 Piper Chapman (Taylor Schilling), the 'nice blond lady' who winds up in prison in 'Orange is the New Black.' (Netflix)

Orange Is the New Black, Episode 1: The New McNulty

Orange is the New Black’s main character is its weakest link—but you should watch it anyway.

This show isn't only about women—many of them women whose stories we just haven't seen in a TV show before—it's about the relationships between those women.

The world is full of wonderful surprises. Among them, I count this: That one of the best TV surprises of the summer would be a light women-in-prison “dramedy” starring an actress best known for playing Dagny Taggart in Atlas Shrugged: Part 1.

The premise of Orange Is The New Black had the capacity to be remarkably offensive. A TV show, particularly a comedy, has an obligation to fashion its particular world into a place that viewers enjoy visiting, week after week; prisons are neither warm nor cuddly, and portraying them as such could be both uncomfortable and insensitive to the horrors and abuses real prisoners face. And indeed, Orange’s basic premise—a twee, sweater-wearing, artisanal-bath-soap-creating, upper-middle-class white woman goes to prison for an extremely minor and non-violent crime, whence she will be surrounded by Dangerous Criminal Types—struck me, at first glance, as both classist and racist.

Well: I was wrong. There are good arguments to be made against Orange Is The New Black, and good writers have made them. But this is a show that cares deeply about its characters—almost all of them female, many of them not straight, white or middle-class—and doesn't shy away from the horrors they have to live down, or live through, over the course of their incarceration.

So it's unfortunate that “I Wasn't Ready,” the first episode of Orange Is The New Black, must necessarily focus on its weakest element: the twee white woman. Namely, it has to delineate how Piper Chapman found herself in prison—a story that involves an old relationship with an international drug dealer named Alex (Laura Prepon), a solitary errand involving lugging a suitcase of money from one airport to another, and a bad break-up, which, we're led to believe, drew Alex to name Piper as an accomplice in a deposition ten years later.

I don't mean to slight the performance of Taylor Schilling as Piper Chapman; she's a fine actress, and being identified most closely with an Ayn Rand character is enough punishment for any one lifetime. But Piper is one of the show's least compelling characters (outdone only by the character's fiancé, Larry) because her story and viewpoint is the most conventional. Plus, her quirky, quivery, rom-com-heroine cuteness can be grating in large doses.

But large doses are what we get, at least in the pilot. Much of the episode is spent on Piper's pre-incarceration life with Larry (which, despite a sex scene, feels oddly sexless and fraternal). Piper weeps adorably about going to prison, smiles adorably when Larry proposes, and flutters about adorably, updating her blog in the prison waiting room and at one point worrying aloud about how she'll miss “like three new generations of iPhone” while she's doing time. All of this will provide necessary contrast for her later scenes in the series—or, Hell, her last scene in the pilot, when the reality and non-adorability of her imprisonment finally hits her and she descends into a screaming panic attack—but in the moment, it's not the most convincing argument for Orange is the New Black’s promise as a show.

But then, series creator Jenji Kohan has as much as admitted that Piper's character (who is based on memoirist Piper Kerman, but whose character arc is wildly divergent from Kerman's book and life) is, among other things, a concession to the commercial realities of making television: “I don't think I could have sold a show about black and Latina and old women in prison, you know? But if I had the girl next door coming in as my fish out of water, I can draw a certain audience in through her that can identify with her, and then I can tell all of these stories once she's in,” Kohan told IndieWire. In the show's early going, it's often best to think of her this way, like a female equivalent of The Wire's white, straight, police-force-employed McNulty: He was often the least interesting part of the show, and he became steadily less and less central to the plot, but he had to hang around in order to sell the more compelling, less marketable plotlines about Stringer Bell or Omar.

What does make the case for the show, in this first episode, are the scenes set in the prison, where Piper struggles to cope with the fact that she's no longer a free or socially valuable person. When she casually commands a prison guard to wait before incarcerating her, so that she can say a proper goodbye to Larry, we understand both why she feels entitled to it—she won't see him alone for a year; he's her fiancé; it's only polite—and why the prison guard's response (“You telling me what I can do?”) makes total, alarming sense. Piper thinks she's “the nice blond lady I was supposed to be;” the guard thinks she's a danger to society. The series will be based around negotiating the space between these two reductive, incomplete definitions.

And, of course, the other case for the show—its primary selling point, in fact—is all of those other characters. This show isn't only about women—many of them women whose stories we just haven't seen in a TV show before—it's about the relationships between those women. You could argue that Orange Is The New Black is the logical outcome of the debates about flawed female characters that consumed most of feminist pop culture talk last year, touched off by the oft-alienating self-portraits of Girls creator Lena Dunham and memoirists Kate Zambreno and Marie Calloway. You could also argue, perhaps more convincingly, that it's a 13-episode-long meditation on the Bechdel test, and on how women treat each other under duress.

This is what stands out most about the pilot: The sheer variety and complexity of their relationships with each other are already on display. In the space of one hour, we see women falling in love with women, becoming the bitter exes of women, being abusive mothers, being estranged daughters, exploiting other women, protecting other women, brutalizing other women, counseling other women spiritually, and just plain shooting the shit. We won't get to know most of these characters for quite a while, but we can already see that they know each other, and that this is a show that takes women seriously enough to know that the most interesting and deeply felt relationships of their lives will not necessarily be with men.

It's those relationships, and the world created by them, which we're being invited to step into. For the time being, it's best to think of Piper—with her quirky tweeness and iPhone fixation—simply as the first step along that road. In the pilot's final moments, when Piper is brought to realize that (a) the defining relationship of her life has had nothing to do with Larry, or with being a “nice blond lady,” and (b) that this defining, frightening relationship never really left the picture, and has in fact just flickered back into life, we begin to get a sense of the story that the show really wants to tell. In many ways, Piper may be a conduit through which more marginalized and more interesting stories can be told. But she, too, will be called upon to confront how she sees the women in her life—and, ultimately, how she is willing to see herself.