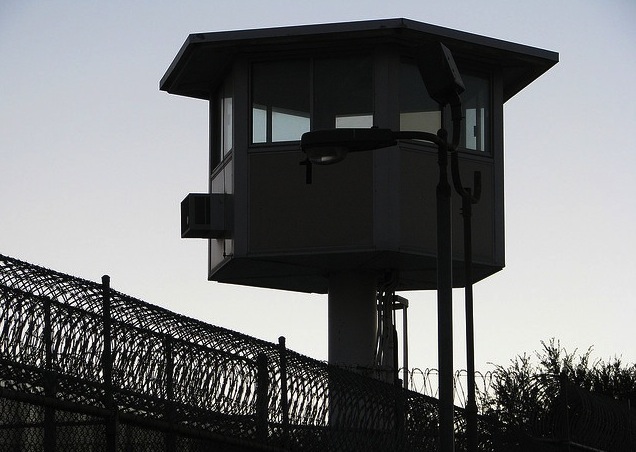 The majority of immigrants who have languished in detention facilities have no criminal record.. (Rennett Stowe / Flickr / Creative Commons)

The private prison industry stands to gain millions from the Senate’s reform plan.

Private prisons have spent millions on federal lobbying, and in the last election season alone, donated hundreds of thousands of dollars to the coffers of governors, federal candidates and both political parties.

The supposed grand bargain of the immigration reform bill is shaping up to be a lucrative deal for prisons. As a compromise between “border security” and “amnesty,” the comprehensive reform plan emerging in Congress ties the “legalization” of millions of migrants to the prospective criminalization of millions more.

The Senate’s reform bill, now being debated in the House, would boost immigration enforcement by beefing up border patrols, militarized barriers, border surveillance, immigration prosecutions and privately run detention facilities. According to Congressional Budget Office (CBO) projections, the original bill approved by the Senate Judiciary Committee “would increase the prison population by about 14,000 inmates annually by 2018.” (The number of “immigration offenders” in federal prison has risen over the past decade to about 22,100 in 2011.) Just before passage, the bill was saddled with the draconian “Hoeven-Corker border security amendment,” which contains harsher, more costly enforcement provisions, including a doubling of border agents to roughly 40,000.

Though the fate of the bill is now unclear, House Republicans could take an even more reactionary stance, perhaps by insisting on even more oppressive border security measures in exchange for reform or by simply rejecting any significant steps toward legalization and pushing tighter restrictions instead.

Under the centrist reform plan, some immigrants can gain legal status under certain conditions, such as paying heavy fines and meeting rigid qualifications for criminal background checks and employment status. Attainiing citizenship could take well over a decade. Meanwhile, to placate conservatives, the bill expands the corporate systems that lock up and dehumanize the migrants who don’t make it over the legal threshold.

In other works, while the bill produces new citizens, the “security” measures would produce more prisoners, conveniently filling tens of thousands of detention beds, many of them run by for-profit contractors on the public’s dime. ​As Stephen Myrow, managing director of the investment research firm ACG Analytics, said in an interview with the Wall Street Journal, “Immigration reform will boost revenue at privately operated prisons.”

In other words, ”there is a tremendous incentive [in the Senate bill] for those contractors who could bid for new prison contracts,” says Alexis Mazón, a researcher with Justice Strategies, a criminal justice watchdog group. And they aren't the only beneficiaries, she notes: Developers and manufacturers of policing and surveillance technologies also stand to gain.

Though the private prison industry has denied lobbying directly for prison reform (although executives have acknowledged how their businesses stand to profit), the enforcement-heavy proposals bear the fingerprints of the industry's longstanding backdoor political influence. Research by Grassroots Leadership, Detention Watch and various media outlets reveals that private prisons have spent millions on federal lobbying, and in the last election season alone, donated hundreds of thousands of dollars to the coffers of governors, federal candidates and both political parties.

Overall, the proposed overhaul would pump hundreds of millions of dollars into agencies and contractors charged with “apprehending and detaining unauthorized residents,” according to CBO estimates, along with prosecuting and deporting them. Reform, in other words, would scale-up existing the harsh enforcement trends under the Obama administration. In 2010 alone, an estimated 392,000 migrants passed through the detention system—more than doubling over the past decade. Immigration-related convictions have driven up the prison population as a whole, and the incarceration of Latinos in particular. In 2011, Latinos became the majority of those placed in federal prison on felony convictions.

Who pays for reform?

Prison corporations present private detention as a “win win” way to boost economic growth and control immigration. But private immigration detention, like private prisons in general, has generated voluminous reports of systematic mistreatment and miserable conditions, including threadbare health services, cruel social isolation and excessive phone fees, lack of legal due process,  sexual abuse and deaths in custody. Yet the majority of immigrants who have languished in this byzantine system have no criminal record, according to an analysis of 2010 data by the ACLU.

The Senate bill, however, ignores these “lose lose” consequences of mass immigrant detention on civil rights and the economy. Currently, the government prosecutes some 80,000 immigration violation cases each year, and under the committee-approved reform bill, according to CBO, “fully implementing the new border protection provisions under the bill would increase the number of those prosecutions by about 12,000 per year.” Additionally, enhanced border enforcement at a specific portion of the border in Arizona would “triple the number of prosecutions” for violating immigration laws, which would amount to prosecutions of about 35,000 more people annually.

Selling the public on prisons

In contrast to the marketing of private prison systems as a cost-effective management solution and a boon for local economies, the wealth does not always trickle down. In fact, researchers with Washington State University found that “new prisons in states in which privatization is surging impede employment growth in the host community.”

In a follow-up correspondence, lead researcher Greg Hooks writes to In These Times that because state governments tend to suppress labor costs when they privatize prisons, “where state government have embraced privatization, we found that rural prison towns significantly worse off (in terms of employment outcomes). It is likely that the same dynamics would be at work in the immigration detention sector.”

Morevoer, the conditions in prison can be miserable not just for the people behind bars, but for the people keeping them locked down. According to a report on CCA by the advocacy group Grassroots Leadership, private detention centers often achieve cost “efficiency” by “reducing employee benefits and salaries, operating on routinely low and dangerous staff-to-prisoner ratios, and not offering sufficient staff training.”

In Arizona, for example, research by the American Friends Service Committee concludes that inadequate training “can leave employees frustrated and unprepared to handle crises. As a result, these facilities frequently have very high turnover rates and are chronically understaffed. The combination of these factors not only produce a difficult work environment, it can also make these facilities genuinely unsafe for staff, inmates, and the community.”

Another disturbing aspect of the prison economy is the practice of making prisoners work for unconscionably low wages. A 2012 Truthout investigation revealed that many detained migrants work in so-called “voluntary” jobs, doing manual labor for as little as $1 per hour—in other words, wages that make the exploitation of migrants on the outside look kind by comparison.

Lawmakers and communities should go back to the drawing board and develop a piece of legislation that will not only help strengthen the U.S. economy, but also strengthen worker protections, and job growth and job security for immigrants and U.S. citizens alike, and base it on a human rights framework, instead of a national security framework. That would definitely be a lot cheaper also than going the prison and policing route.

While popular criticism of the immigration bill mostly reflects irrational right-wing panic over immigrants “stealing American jobs,” a real danger lurks between the lines: that of expanding an industry that exploits U.S. workers in order to oppress an arbitrarily defined Other.

The alignment between the prison industry’s interests and the centrist reformers in Congress betrays the bill’s underlying motive: not to empower migrants or to lift the economic prospects of U.S. workers, but rather, to adjust the line between “legitimate” and “criminal,” and to let corporations extract a brutal social toll from those who try to cross.