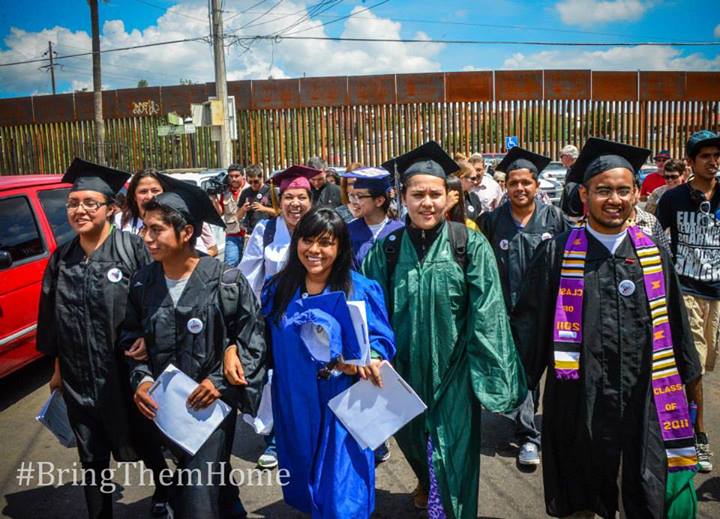 Donning graduation caps and gowns, the Dream 9 activists attempt to cross into the U.S. at the Nogales border station, July 22, 2013. (Photo from the National Immigrant Youth Alliance)

No Papers, No Fear

The ‘Dream 9’ represent a radical strand of the immigration movement that’s fed up with compromise.

The muscularity of their protests sent a cultural message that contrasted starkly with the congressional lobbying and saccharine messaging that has long characterized the reform advocacy of mainstream nonprofits and liberal politicians.

Nine young people are changing the way the country talks about immigration—not from the floor of Congress or a campaign podium, but from a detention center.

On July 22, the undocumented youth deliberately crossed the southern border into the United States, as a protest against immigration policy as well as a symbolic act of resistance to the deportation system that has loomed over them and their families since they first entered the country.

Their carefully orchestrated protest placed the nine—Claudia Amaro, Adriana Gil Diaz, Luis Leon, Maria Peniche, Ceferino Santiago, Mario Felix, Lulu Martinez, Marco Saavedra and Lizbeth Mateo—directly on the frontline of the immigration reform debate. Hailing from different states and ranging in age from 19 to 37, they have languished in in Arizona’s Eloy Detention Center for two weeks. Six of the nine were in Mexico prior to the action, having either been deported or left the U.S. to avoid enforcement authorities. But Mateo, Martinez and Saavedra are longtime activists based in the U.S. and “self-deported” specifically to take part in the protest.

As their story has streaked across the news headlines, they have inspired a wave of social media activism and calls for solidarity, as well as controversy in elite political circles.

In Washington, the acts of the “Dream 9” have upset the delicate politics of the immigration debate. But with their iconic graduation caps, standing defiantly at the U.S.-Mexico border crossing, the Dream 9 have also become a new touchstone for the migrant rights movement, especially for the more radical strands of the movement who are less willing to seek legislative “compromise” in the halls of Congress and more focused on advocating for justice.

The “Dreamer” label was born out of the DREAM Act, a bill that has repeatedly failed over the past several years that would provide immigration relief to undocumented young people who are pursuing higher education or military service. But since the movement has mushroomed across the country and diversified, some have taken a more militant stance on demanding an end to deportations, and fighting for the legal rights for their undocumented parents and other family members (this issue has especially come to the fore since the Obama administration granted limited, temporary relief to young undocumented students last year).

Fueled by the slogan “No Papers, No Fear,” young rebels like the Dream 9 are presenting themselves as transnational activists with grassroots connections to communities struggling not just with anti-immigrant policies but various types of oppression, including poverty, educational inequality, and struggles with gender and sexual identity.

The Dream 9's act of defiance is the latest chapter in the evolution of undocumented youth activism, which sparked national debate back in 2010 with a high-profile sit-in at the office of Sen. John McCain. Taking a cue from the radical student movements of the 1960s, the muscularity of their protests sent a cultural message that contrasted starkly with the congressional lobbying and saccharine messaging that has long characterized the reform advocacy of mainstream nonprofits and liberal politicians.

Last year, the group with which the nine are affiliated, National Immigrant Youth Alliance, took an even bolder action by submitting deliberately to immigration authorities and then infiltrating a Florida detention center, in order to protest for the rights of detainees. At Eloy, the Dream 9 have, according to reports from the inside, spent days on hunger strike and in solitary confinement, are now awaiting a legal decision on their detention status after petitioning for asylum on humanitarian grounds. (On Monday night, several got official approval to proceed with their appeal).

Another Dreamer activist, Mohammed Abdollahi, is fighting for recognition on multiple fronts, as an Iranian-born, undocumented, queer 27 year-old member of the National Immigrant Youth Alliance. After a string of failures on immigration reform under the Obama administration, he tells the Daily Beast, “Sometimes we have to use our bodies to make points.”

While some have criticized their action as too radical, the Dream 9's supporters see their imprisonment as an exposure of the irrationality of the law itself. Or, as Dream 9’er Lizabeth Mateo put it, “I know you’re going to think that I’m crazy for doing this… but to be honest, I think it’s even crazier that I had to wait fifteen years to see my family.”

The Dream 9 have become a rallying point for many youth in the movement who have felt shut out of the cautious political dialogues in Washington. By framing immigrant justice as a human rights issue, they challenge mainstream reform groups that selectively tout the merits of the “good” immigrants who have proven to be “deserving” through their educational achievement or patriotism. They aim to push the debate beyond the usual Beltway rhetoric of “earned citizenship” and “aspiring Americans.”

After all, these young detainees are not the “model” Dream Act youth who make the headlines, the sympathetic strivers. For these rogue nine, it's not about just “earning” papers or citizenship, but the principle of belonging.

This concept of belonging is key to the Dream 9's ethos. They placed themselves at the hands of federal authorities to underscore the absurdity of the constraints imposed on them by national boundaries. The same yearning for freedom beyond the conventions of the law—of a deep sense of transborder humanity—intersects with a desire for a more complex identity of migritude, one that encompasses many generations, embraces queerness and includes many forms of cultural and linguistic otherness. The Chicago-based Immigrant Youth Justice League explains:

The idea of home transcends borders, it transcends nationalism, singularities, it defies definition, redefines belonging, and breaks away from the imprisonment that holds many stationary… As fellow community members, we have the responsibility to support our neighbors and loved ones, although far away from us they still live and exist. Their ideas of home are as important here as they are there.

The wave of support from pro-migrant activists highlights a long-standing rift between activists who see immigration as part of a broader struggle for equality, and the centrist groups pushing legislative reform from an assimilationist position. Prominent immigration attorney David Leopold along with some members of Congress have criticized the Dream 9, and grassroots activists have expressed outrage at what they perceive as a fearful silence among mainstream groups.

Lacey Williams of the advocacy group La Coalición discusses the lack of support for the Dream 9 among mainstream reformers as a sign of political cowardice:

Will we be the people who hush the more radical and risk-taking factions of our community? Even if it is those factions that can push us over the finish line? Will we let our fear of being branded ‘radical’ shame us from having the backs of our friends who risked their lives to put a new face to this movement?…

Whatever the fate of the Dream 9, they've already made an indelible impression on the immigration debate by showing that building a movement is an art as well as a craft—the day-to-day footwork of marching and petitioning works best when punctuated by the creative flourishes of symbolic action: El Teatro Campesino in the fields, the human chain blockading riot police, the graffiti scrawled on the border wall. Activism at its most powerful is a collective dare.

When they crossed the line, the Dream 9 rejected the notion that migrants should be content with merely “surviving the journey.” By standing firm even when they’re locked up, they’re liberating their narrative from the politics of fear. And their creative recklessness helps us redefine the art of the possible.

Michelle Chen is associate editor at CultureStrike, which has been supporting the Dream 9 campaign. Follow their coverage here.