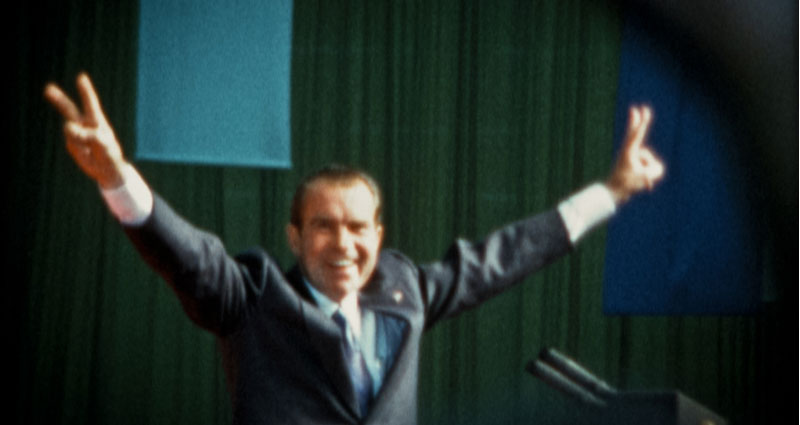 President Nixon at a 1972 rally, a few days before his historic landslide reelection. (Courtesy of Dipper Films.)

Four short years, but what a payload of historical poison, and what a time in history to have these innocent-seeming soul-sellers acting like camera-crazy tourists in their own lives.

Born from a miracle of found footage, the documentary Our Nixon provides an inside portrait of the 20th century’s most scandalous presidential administration. When you consider the Nixon regime’s neurotic obsession with surveillance, proactive espionage and secret-keeping, the circumstances of how the film came to be are as provocative as the film itself. The doc pivots on hundreds of reels of 8mm home-movie footage shot at the White House by camera bugs H.R. Haldeman, John Ehrlichman and Dwight Chapin from the 1969 inauguration until 1973, when the staffers were forced to resign and face the Watergate hearings. Four short years, but what a payload of historical poison, and what a time in history to have these innocent-seeming soul-sellers acting like camera-crazy tourists in their own lives.

The films were seized as part of the 1973 Watergate investigation and sat in the National Archives until 2010, when filmmakers Penny Lane and Brian L. Frye digitally copied all of the public-domain material. In her edit, Lane recreates the Nixon administration’s history, buttressing the footage with news reels, TV interviews and reams of secretly recorded phone conversations between Nixon and the 8mm-enthralled staff, as they confront in damage-control mode first the Vietnam War and the Pentagon Papers, then the self-immolation that begins with self-described “ratfucker” Donald Segretti and the break-in at the Watergate Hotel.

But Our Nixon’s inevitable focus is not Nixon, nor even politics—it’s the three busy shooters, squares and nerds to the last, and their unabashed delight in walking the halls of power at what they saw as a watershed moment in modern history. Haldeman, Ehrlichman and Chapin are a surprisingly goofy trio of rubberneckers, turning their cameras on every world leader and celebrity they come across, and often filming each other—even preserving each other for posterity while visiting the Great Wall of China in 1972.

Our Nixon is loaded with irony and sardonic editing (though nothing quite beats the hilarious opening credits, which introduce the three filmmakers in shots from each others’ footage, accompanied by sitcom typography, freeze frames and Tracey Ullman’s 1983 cover of “They Don’t Know”). As the boys discuss the Oval Office secret taping apparatus with Nixon, we see a visual survey of Haldeman’s office, which is full of cables and wires. Lane employs even the innocuous stuff—as the post-Watergate conversations transpire on secret tape, the movie cuts to someone’s attentive portrait of the White House garden. Squirrels and hummingbirds get loving close-ups, as if the original cameramen couldn’t dream of anything more important.

Lane’s movie is an audio-visual footnote to the real history of the Nixon years, and as such it’s less involved with factual revelation than with glimpses of emotional context. Retrospective TV interviews with all three men give voice to the rationalizations and regrets we’ve all heard since, but the home movies are filled with childlike hope and serve as a kind of counterpoint to everything else we know about the Nixon White House, suggesting a pathological narcissism, or at least a giddy sense of privilege and power that these convicted schemers would do almost anything to protect.

In this, Our Nixon falls into a rare subgenre of non-fiction film: assembled footage that uses its subject’s original film as a kind of retrospective autocritique. From Werner Herzog’s Grizzly Man to the massive reverse-propaganda behemoth The Autobiography of Nicolae Ceausescu, it’s a type of film that reveals the mutability of cinema, which serves its maker’s intentions until it becomes a mirror. If you’re a political malfeasant, it can swing back at you like a whip tail.

Still, we should be thankful Nixon’s aides were so innocent of the power of cinema, because the ephemeral just-for-fun films they shot will outlive them all. (Only Chapin is still alive, turning 73 this year.) Before them, White House home movies weren’t terribly feasible, and after them no one would dare. But now we can see how these notorious power brokers saw that moment—as the time of their lives.