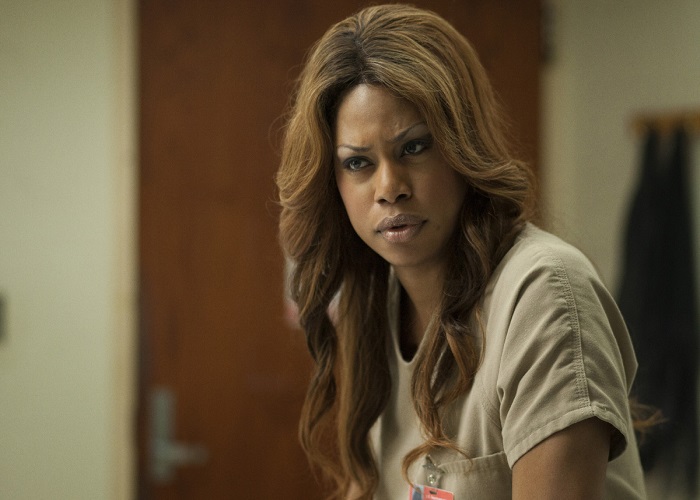 Prison, in this show, is not a place defined exclusively by shock-and-gore brutality. It's a place where the worst loss is often the loss of control.

“Lesbian Request Denied,” the third episode of Orange Is The New Black, was the big press-grabber. Lots of that press has been deserved. It was directed by Jodie Foster. It's the first big showcase for Laverne Cox as Sophia Burset, a transgender firefighter who paid for her transition—and tried to save her relationship with her son—with stolen credit cards. That being said, it may not be the show's best episode, and it may not even be the best Sophia episode (her utterly delightful friendship with Sister Ingalls, the pacifist nun, is not explored here). And, unfortunately, about half of the episode is pretty darn skin-crawling. The half that focuses on Sophia, however, is a careful, thoughtful exploration of a story that's very rarely shown on TV.

One storyline—the one people tend to remember when they praise it—is the story of Sophia Burset's transition and how it's threatened by the prison's abrupt and causeless decision to take her off of her estrogen. Burset has been introduced to us, in the first two episodes, as a near-stereotype: Most of her lines have centered around praising, or styling, another woman's hair. And, as others have noted, there's a bit of skeeve to the way we're invited to examine Laverne Cox's body in the opening scenes of the episode: We see a pre-transition Sophia (played by Cox's twin brother, M. Lamar) stripping down to her bra and panties, a topless Sophia examining her figure, Sophia putting on makeup. There's also an alarming amount of expository dialogue in which the other characters discuss the fact that Sophia is transgender, as if it just now occurred to them. Teagan Widmer, a young trans writer, has noted that “almost every time that Sophia is on screen the writers make some sort of reference to genitalia.”

But then Laverne Cox starts talking, and—for me, anyway—other concerns just fly out the window. Cox's delicacy and range are gorgeous: We see her as an overcompensating mother, a doting wife, a hardened survivor. Part of this comes from the script, but most of it comes from Cox. She plays Sophia as an essentially gentle and vulnerable woman, and that vulnerability often hurts to watch. But she's also had to fend for herself for a very long time against some fairly tough odds, so we understand how she's gotten to the point of swallowing bobble-head dolls just to get her damn medicine.

This is good stuff; so good, in fact, that the cringe-inducing other storyline is almost forgettable. And yet, I get a particular kind of headache when I think about the introduction of Suzanne “Crazy Eyes” Warren.

Orange is the New Black has a habit of presenting its characters first as sketches, or even as cartoons—hell, Sophia's entirely hair-based dialogue in the first two episodes is a good example—before curving back around to show us their humanity. When the show is watched all at once in the sort of sleepless binge the Netflix model invites, this works. Viewed as isolated stories, though, those initial cartoons can be off-putting.

Because what we're seeing, for a whole lot of this episode, is a middle-class white woman being terrorized by a sexually predatory, mentally ill black woman. It can be funny—Uzo Aduba gives a marvelously matter-of-fact reading when she informs Piper that they're a couple because “I threw my pie for you”—but it's also playing into ugly stereotypes about race, the mentally ill, and desire.

It's not that Piper's “real,” heterosexual relationship is all that compelling. There's still no reason to believe that Larry and Piper have anything going for them as a couple, other than the fact that they're already a couple. (Larry's shining moment this week: He tells Piper that he can only visit her “once every two weeks, so that I can have a life,” then tries to pressure her into phone sex.) But there's still the sense, in this early going, that Larry is safe, part of Piper's “good life,” whereas Piper's same-sex prospects, from Alex's chilly, treacherous advances to Crazy Eyes' out-and-out stalking , are scary and inappropriate. And in the case of Crazy Eyes, we're all but invited to believe that being black, or mentally ill, or both, makes her uncontrollable, violent, and repulsive.

To put it another way: One of the episode's big strengths is that, rather than framing Sophia's story as a Very Special Episode: Transgender People Exist Edition, her fight to get her medication ties into one of OITNB's main statements about incarceration. Prison, in this show, is not a place defined exclusively by shock-and-gore brutality. It's a place where the worst loss is often the loss of control; you can no longer choose your doctor, your clothes, your food, the place where you sleep. It's a series of small, incremental humiliations that add up to a total, crushing loss of freedom. When Sophia is bartering desperately for her estrogen—going through every channel imaginable, fending off predatory offers from Pornstache, damaging her already fractured marriage by pleading with her wife to sneak it in—we understand it as the humiliation and need of anyone trying to buy back her own basic autonomy from a system that's ripped it away.

But Crazy Eyes, it would seem from her nickname, is also probably dealing with a medical condition, and trapped in a place where she can't get her medication—or not enough of it, or not the right kind. She's also had her autonomy, and her health, taken away from her by this place. And for the moment, all we see is a reason to fear her. The show will, in fact, undermine and complicate all of this (and I do mean all of it) before the end of the first season. But in the moment, it's just not fun.

Of course, this is a lot of thought to put into a show where one woman is regarded as more fearsome than all the other inmates simply because no one has ever seen her poop. But this is a show that invites a lot of thought. It's a show that is kind and thoughtful enough to call attention to its own occasional simplifications and cruelties. And, yes, it's a show that will eventually give us the entirely relatable inner life of Crazy Eyes. The bumps along the road are just sign posts of all the stuff the show hasn't quite worked out—yet.