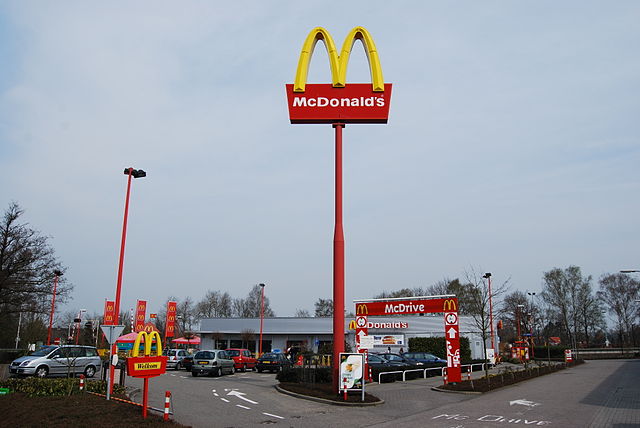 If McDonald's paid its workers a living wage, the price of a Big Mac would increase by less than a nickel. (Wikimedia Commons)

Last month, McDonald’s gave its workers a little gift—a budget purporting to show how to survive on the starvation wages the burger behemoth pays. The bizarre financial plan made millionaire McDonald’s CEO Don Thompson look like a real clown.

Wearing oversized Ronald McDonald shoes, the CEO stepped in it big time when his budget suggested workers subsist with no money set aside for food, clothing or even soap to scrub off deep-fryer stench. To secure the laughable amount of $20 a month for health insurance, the McDonald’s budget requires the worker to take a second job. The McDonald’s plan: work 80 hours a week; but don’t eat. No happy meals. Not one.

More money would work so much better for McDonald’s employees than Thompson’s recommendation that they forego food or rely on food stamps. And welfare. And public housing. And Medicaid. That’s the real McDonald’s budget. Like other employers paying minimum wage or slightly more, McDonald’s leans on taxpayers to subsidize the payroll. Taxpayers cover the cost of McDonald’s workers’ health care and a big portion of their housing and food costs. The vastly profitable McDonald’s corporation is an unabashed welfare recipient. Coronate Ronald McDonald Welfare King. Sound the trumpets!

The payroll subsidy that low-wage paying corporations collect through welfare programs is way more valuable than the million dollar prize in McDonald’s Monopoly game. The U.S. House Committee on Education and the Workforce calculated what it costs taxpayers to prop up low-wage workers at a Walmart Supercenter. It’s as much as $1.7 million a year. For one store. That’s $5,815 a year for each Walmart worker that taxpayers fork over. No wonder the Walton family is the richest in the world. They win McWelfare Monopoly every day.

In fairytale McDonaldland, low-wage workers are teenagers flipping burgers to buy the newest video game system or expensive prom dress. In reality, low-wage workers are adults. Nearly 70 percent are 20 or older. And they’re not getting younger. The average age of low-wage workers increased 2.6 years since 1979. More than a quarter of them have children. The name of McDonald’s purple blob character describes life for them—“Grimace.”

There’s trouble in real-life McDonaldland now. Since late last year, in cities across the country, low-pay workers have banded together with community organizations, churches and unions to demand a wage increase. They’ve demonstrated, rallied and conducted one-hour and one-day walk outs.

The value of the minimum wage has declined since 1968 when it was worth $10.56 an hour in today’s terms. Now, it’s $7.25. It has not increased in four years. President Obama and Democrats in Congress are calling for it to rise to $9 or $10 an hour. Many low-wage demonstrators, however, are demanding something closer to a living wage—$15 an hour.

One of them, Christopher Drumgold, 32, a father of two earning $7.40 an hour at a McDonald’s in Detroit, told Steven Greenhouse of the New York Times, “Fifteen dollars an hour would be great—we’d be able to pay our living costs…On what I’m earning right now you have to choose between paying your rent and eating the next day.”

In other words, $15 an hour from McDonalds would liberate him from reliance on government assistance because he’d be paid enough to cover his expenses. It would mean taxpayers could stop subsidizing McDonald’s payroll.

McDonald’s, Walmart and other low-wage-paying, highly profitable corporations are shelling out a lot of money—not to their struggling workers—but to lobbyists to fight state and federal efforts to increase the minimum wage. They’re demanding that taxpayers continue to bankroll their businesses.

These corporations could pay workers more. But they are happy on the dole. There’s plenty of evidence that it’s possible to increase wages. For one thing, they already pay more in some places, like San Francisco, where the minimum wage is $10.55 and in Washington State, where it’s $9.19. In France, McDonald’s pays the equivalent of $12 at 1,200 thriving franchises.

In June, more than 100 economists signed a petition to raise the minimum wage to $10.50. In an attached report, they note that McDonald’s could cover half of the cost of that wage increase by raising the price of a Big Mac by one nickel. Mickey D patrons would still be “lovin’ it” at $4.05.

Here’s another telling example: McDonald’s spent $6 billion to repurchase shares and dividends in 2011—the equivalent of $3,500 for each of its 1.7 million restaurant workers worldwide. The Hamburglar gave all of the money to stockholders and none of it to the people whose labor produced the profits.

And there’s this: Last year, McDonald’s more than tripled the compensation packages for its new CEO Thompson and for the man he replaced. Tripled. Thompson’s pay went from $4.1 million to $13.8 million.

The “Fight for Fifteen” workers are asking for just slightly more than double, from their current $15,000 a year before taxes to $31,200. They’d gracefully forgo the free company car and free vacation rides in the McDonald’s jet that Thompson gets. They’d be OK with Thompson pulling down 442 times their pay as long as they could cover their own bills.

McDonald’s workers don’t need budgeting help from millionaire CEOs. What they need is for McDonald’s to supersize their wages. McDonald’s $1.3 billion in first quarter profits didn’t magically rain down from Golden Arches. The labor of McDonald’s workers produced it. McDonald’s led the nation in creating fast food. It’s time for it to lead again by stepping up and paying its workers a living wage. The nation’s 3.6 million minimum wage workers deserve a bigger piece of that McApple pie.