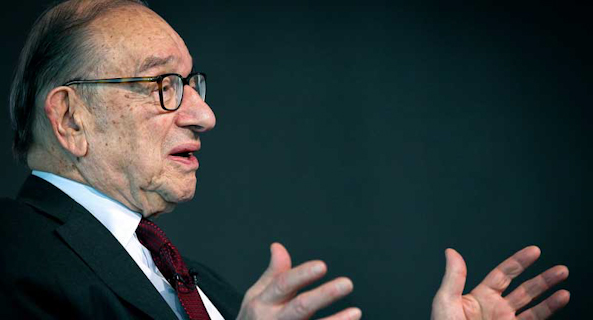 If it weren’t for the C.V. of its author, The Map and the Territory would be another tract of investor-class propaganda.

There’s a thrill in seeing a chastened Alan Greenspan return to the policy arena. The former chair of the Federal Reserve was last seen in 2008 confessing to Congress that he’d “found a flaw” in the rational-market hypothesis that had guided his cronyist hand in tailoring policy outcomes to Wall Street’s advantage. “Those of us who have looked to the self-interest of lending institutions to protect shareholders’ equity, myself included, are in a state of shocked disbelief,” he said back then, sounding like a miserable child recently briefed on the non-existence of Santa.

Now, the retired head of the Fed has come forward with The Map and The Territory: Risk, Human Nature, and the Future of Forecasting, a self-justifying tract in which he fills out the blindspots of his laissez-faire dogmatism with truisms about “human nature” and the untamed “animal spirits” (as John Maynard Keynes famously dubbed them) that stoke alternating moods of euphoria and fear in our financial markets.

The end result: a classical laissez-faire faith that bleats loudly over the unholy excesses of government regulation and entitlement spending, and a market psychology that shrugs off systemic corruption as the regrettable but ineluctable byproduct of human nature or remote “geopolitical events” over which humble market guardians like Greenspan could never hope to exert effective control.

Humans possess “an introspectively self-evident propensity to be competitive,” Greenspan writes in a typically clotted formulation. And this is good. “Competition as it plays out in markets is … indispensable to the efficient functioning of our economies.” What’s more, this trait is inscribed in our genes, so resistance is futile. He speculates that “this propensity is driven by the fact that competition is, in a Darwinian sense, necessary for survival. Unless we successfully compete in the taking of risk, we perish.”

This glib claim fits efficiently into every one of Greenspan’s preferred set of policy prescriptions. The modest Dodd-Frank law, which seeks to curb the worst sins of derivatives and other exotic financial instruments, is an unnatural affront to market sovereignty, Greenspan preaches, and an enervating source of “fear and uncertainty” among a regulation- cowed business class. (This is one among countless unexamined contradictions in Greenspan’s argument: If it’s in the genetic nature of our market masters to be fearless connoisseurs of risk, why are they reduced to a state of whimpering paralysis by the specter of a truly token federal regulation?)

If it weren’t for the C.V. of its author, The Map and the Territory would be another tract of investor-class propaganda. But because Greenspan is Greenspan, it’s a revealing psychological document—just not the sort that Greenspan imagines. He famously encouraged Americans to consider taking out ruinous adjustable-rate mortgages during the housing bubble’s heyday in 2004. The year prior, he tetchily waved away concerns that a bubble was emerging, claiming that any such market distortion would be confined to regional economies, since “there is no national housing market in the United States.” Any “sharp decline” in home prices, therefore, “seems most unlikely.” You don’t say.

But it turns out that Greenspan’s Federal Reserve had been alerted to the dangerous explosion of subprime mortgages in the 1990s, and elected to sit on its collective hands. “Under a policy quietly formalized in 1998,” Binyamin Appelbaum wrote in the Washington Post, “the Fed refused to police lenders’ compliance with federal laws protecting borrowers, despite repeated urging by consumer advocates across the country and even by other government agencies.”

In other words, Alan Greenspan wants to toss the regulatory state into history’s dustbin because his failure to take the need for it seriously was responsible for some of the worst fallout from the 2008 crash. So for him to return now to his own discredited policy playbook as the basis of future economic planning is a shameless ploy. It’s a bit as if, say, Count Dracula were to publish a tanning handbook. But it’s certain to be a bestseller. And that is the most powerful rebuke to the rational market hypothesis one can imagine.