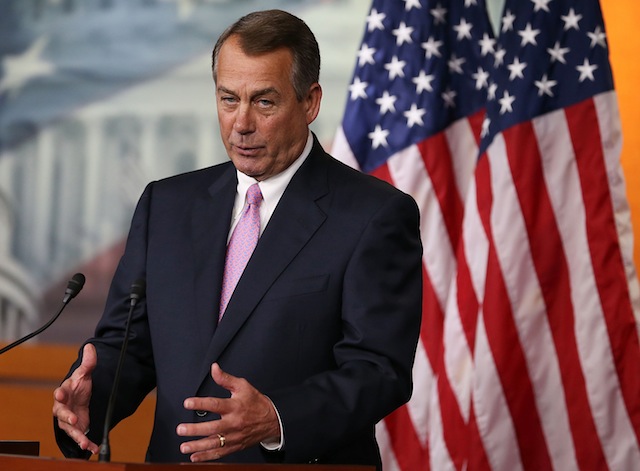 Political theater at its finest: Speaker Boehner talks to the press about the farm bill in July. (Mark Wilson / Getty Images)

Why the GOP Is Really Waging Its War on Food Stamps

The attack on SNAP is mere political symbolism–but that symbolism is lucrative.

Moral: There is high office and lots of money in targeting abusers of welfare and food stamps.

During my service at the Republican National Committee in Washington in the 1990s, I learned just how important symbolism is, both to GOP leaders and their political base.

The House impeachment of President Clinton, for instance, was largely symbolic. Though the public disapproved and the Democrats in the Senate made the two-thirds requirement for Clinton’s removal from office highly unlikely, House Republicans impeached him anyway. House Republicans enacted the political drama purely as symbolic rage—and according to my conversations with GOP fundraisers during that time, that rage helped the RNC rake in millions.

Though I am no longer at the RNC, I smell the same tactic in House Republicans’ recent vote to cut the Supplemental Nutrition Assistance Program, popularly known as food stamps: It is simply more symbolism and political soap opera for Fox News viewers and Limbaugh Leaguers—and, in turn, another opportunity for Republicans to reach potential donors.

Ostensibly, Speaker John Boehner and colleagues have proposed food stamp cuts as a way to cut federal spending. But there are greater factors at work than simple number-crunching in their attempts to slash $40 billion in SNAP funding from the farm bill. In addition to supposed overspending, eliminating alleged welfare fraud and abuse has been a wildly popular issue for the Republican Party since the 1980s. It began with Ronald Reagan and his fictitious Welfare Queen, a symbol that got him elected governor of California and president of the United States. Moral: There is high office and lots of money in targeting abusers of welfare and food stamps.

Still, Republican politicians cry fraud, and the right-wing media gives sensational coverage to cases of food stamp trafficking, whether or not they’re substantiated. Though a recent Washington Times editorial claimed that “[Food Stamp] Abuse Grows Under Obama,” the 445-word piece was completely devoid of any evidence. In fact, the only statistics in the piece are about growth in the number of people receiving food stamps. The absurd implication is that with a record 47 million people receiving food stamps, abuse must also be at a record high. This passes as logic at the Washington Times—and it’s the same argument that the GOP employs as justification for making cuts that would jeopardize the food security of an estimated 3 million people.

House Republicans also want to demonstrate their commitment to reducing unemployment, even if it’s through ineffective means. Our nation’s high unemployment rate lingers around 7.5 percent, even as the government tells us the recession is over and recovery is among us. Republicans see cutting $40 billion in food stamps to force people back to work as a viable, quick-fix solution to the long-term structural damage caused by George W. Bush’s mismanagement of the economy (not that they would admit it).

The problem with this symbolic “put food stamp recipients to work” is that it will likely backfire: SNAP recipients are largely seniors, the disabled and single women with children. These people can’t easily return to the job market. However, that hasn’t stopped Republicans from reiterating the rhetoric that cutting SNAP benefits will improve the economy.

Symbolism is important to Republicans and their base, even if the symbolism is without any legitimate factual backing and unlikely to produce any real results. This time around, Senate Democrats have referred to food stamp cuts as  “dead on arrival” in their chamber, and President Obama has pledged to veto a bill with such funding stipulations. But GOP supporters understand the fraudulent symbolism well. They’ve been funding its champions for more than thirty years now—from Reagan to Mitt Romney, who used his opposition to the Affordable Care Act to drum up fundraising even though it was based on his own Massachusetts health care bill, symbolism has sold well in the GOP base.

People will, I am convinced, someday tire of the GOP politics of symbolism. Until then, expect the RNC operatives and their Hill masters to bring on more distorted symbolism to stuff their bank accounts. This is the GOP’s Washington way of business.

Longtime Washingtonian James Patterson writes from San Francisco. He served as the first LBGT Program Manager for the federal government during the Clinton Administration. He is a former Foreign Service Officer with the State Department and served as attaché at the US Embassy in Mexico City. His reviews, essays and journalism have appeared in The San Francisco Chronicle, The Hill, The Foreign Service Journal, The New York Times, The Washington Post, The Christian Science Monitor and many other publications.