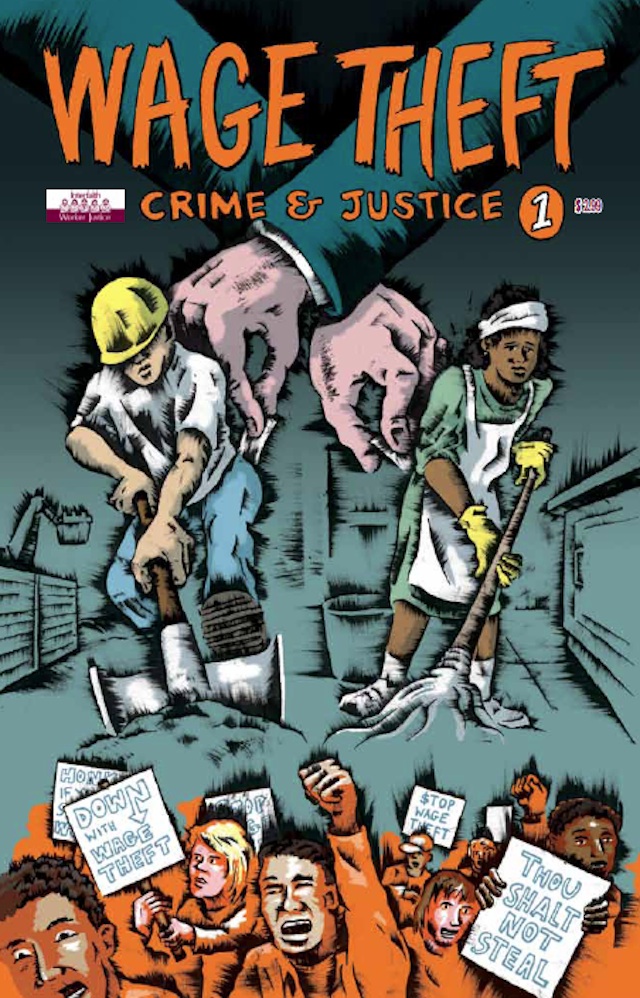 The cover of Wage Theft by Kevin C. Pyle

It’s a Bird! It’s a Plane! It’s the Labor Movement!

Between Korgen’s clear, non-didactic script and Pyle’s beautifully minimalist art, Wage Theft is an ideal model for a labor comic: It’s engaging without resorting to sensationalism, informative without being condescending.

For the most part, the labor movement has yet to take advantage of comic art as a medium for social commentary. With the exception of “one box” syndicated political cartoons and occasional one-shot efforts—like WOBBLIES!, which I coedited for the 2005 centenary of the Industrial Workers of the World—the availability of long-form comics about the labor movement has been severely lacking. Comics have the power to reach beyond political arguments and slogans, revealing true-to-life heroic stories or showing how gains have been made in the past and can be made again. Perhaps now, as organized labor threatens to fade away entirely, the struggle to reach younger audiences may press home the urgency of using comics as a medium to spread labor’s message.

In recent months, two graphic novellas have surfaced that may signal a burgeoning trend of showcasing the labor movement in comic form. The first, Wage Theft, scripted by writer-theologian Jeffry Korgen and illustrated by Kevin C. Pyle, was sponsored by the US Conference of Catholic Bishops and the Archdiocese of Galveston-Huston, among other agencies. It begins with the story of Lupita, a Mexican-born undocumented immigrant who cleans McMansions in the Texas suburbs to make a living. As Lupita struggles to scrape by, the owner of the housecleaning agency accuses her of not working hard enough, then docks her pay thanks to arbitrary “deductions” of increasingly ridiculous varieties. Finally, she’s given information and legal assistance by the Houston Faith and Justice Center.

But Wage Theft, like the reprehensible business practice it’s named after, where bosses hire employees under false pretenses and stiff them of their pay, isn’t limited to just one worker’s situation. Throughout the novella, workers of varying demographics face wage theft’s presence in a number of occupations: restaurants, construction, dry cleaning and meatpacking, to name just a few. The comic concludes with reminders that demonstrations, legal aid and faith can renew a sense of dignity for workers who feel dehumanized by their employer’s abuse. Real-life contact information is even offered for anyone reading the comic and seeking help.

Between Korgen’s clear, non-didactic script and Pyle’s beautifully minimalist art, Wage Theft is an ideal model for a labor comic: It’s engaging without resorting to sensationalism, informative without being condescending.

And First Day is no less remarkable. At the behest of their local union, live-wire business manager Tom Dalzell and self-taught union historian Eric Wolfe collaborated with a team of artists to create a graphic novel about the roots of the organized labor movement. First Day looks like a mainstream comic in every artistic detail, down to the construction of its panels and character designs, but its plot doesn’t rely on superheroes or alien invasions. Instead, the story opens with an electrical-worker dad explaining the necessity of unions to his son and transitions to a brief history of unionism in the industry, focusing on the clash between the AFL and CIO over the American workforce.

This nasty and potentially destructive jurisdictional fight finally ended in the 1950s with a single, unified body, the narrator informs us. The election of Pat Brown as California’s governor in 1958 inaugurated an era of union acceptance—until the present. Now, as the reader learns, unions are being threatened once again by private and public austerity plans, paired with reductions in jobs and benefits.

First Day’s art style, including the facial composition and body postures, is strongly reminiscent of 1950s action comics to a degree that can be initially unsettling. The detailed and expansive script, however, more than compensates for any discomfort. In First Day, readers can learn about the movements of the past, including the struggle for unionization and the effects of the Red Scare in threatening any labor advance. This is history made visual and compelling, particularly for young readers. Ultimately, like Wage Theft, First Day is a model combination of instructive content and evocative design for union educators and politically minded artists alike.

Though Wage Theft and First Day are great starts, there is far more material in the labor movement than could be encompassed in just a few graphic novellas. And in this case, more is definitely better: Let the experiments—and excellent comics—continue!