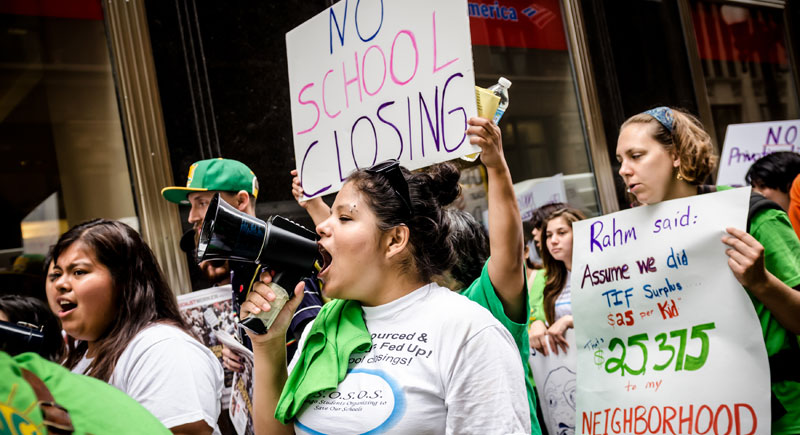 From the Chicago public school closings, some students emerge radicalized.

But the CSU meeting suggests a silver lining in what’s otherwise a dark time for the city: The battle to stave off the largest mass school closings in U.S. history may have been lost, but it has produced some seriously radicalized students.

“Raise your hand if you know what a charter school is,” 16-year-old Ross Floyd said gravely as he stood before 30 high school students gathered in a meeting room in downtown Chicago on September 25 for the first General Assembly of the Chicago Students Union (CSU).

Nearly all of the students shot their hands up. After listening to Floyd rail against the school district’s plans to open scores of new charters just after closing 50 neighborhood schools, the group launched into a brainstorming session of what needed changing at their schools. Ten minutes later, they had a list that included stricter regulation of charters, use of student feedback in place of standardized test scores in teacher evaluations and a process requiring the Chicago Board of Education to consult students on the budget proposals for their schools. Next, the students moved on to the small matter of hashing out how to implement all these ideas this year.

This back-to-school season has been a gloomy one in Chicago, as the 12,000 students displaced by the closings make their way to new schools and the more than 3,000 teachers and staff laid off since May struggle to find work. But the CSU meeting suggests a silver lining in what’s otherwise a dark time for the city: The battle to stave off the largest mass school closings in U.S. history may have been lost, but it has produced some seriously radicalized students.

The CSU, which launched in August, is demanding “a real voice” for students in the school system, including a place on the Board of Education, says Floyd, a junior at Jones College Prep high school and a co-founder of CSU. The union will seek to create chapters at every high school in Chicago, which will then send a representative to a monthly general assembly. The group also plans to push for regular meetings with CPS and Chicago Teachers Union (CTU) officials. Currently, the CSU has representation at about 10 of the city’s more than 100 high schools, according to members, but the group is considering outreach activities that include a free Thanksgiving dinner to draw attention to the high rate of homelessness among public-school students, as well as a snowball fight at Mayor Rahm Emanuel’s house.

The idea for the CSU emerged directly out of student participation in the city’s education movement. Many student members marched alongside their teachers during the historic CTU strike in the fall of 2012.

Nidalis Burgos, a sophomore at Lincoln Park High School and another CSU co-founder, staged a three-hour occupation of Lafayette Elementary School with her family on the last day of school this June in a last-ditch effort to keep open the school that she had graduated from and her younger sister still attended. The family ultimately left after police threatened to get the Department of Family and Child Services involved. Lafayette now lies shuttered. Burgos was heartbroken.

But the action inspired her to seek out new strategies. “We’ve seen lots of protests by parents and community members, and CPS has mostly ignored them. But they have to pay attention to what the students do, because we’re supposedly the reason they’re here. When we walk out, that can stop them in their tracks,” she told In These Times as she marched behind a CSU banner on August 28, when about 30 students staged a one-day school boycott and joined a larger protest at the Chicago Board of Education.

The CSU takes inspiration from groups like the Philadelphia Student Union (PSU), which formed in 1995 in response to the underfunding of schools by the city’s unelected school board, which is handpicked by the mayor. “The idea was to literally create a student union—the same way teachers have a union—in order to force the inclusion of youth voices in decisions about education,” says Hiram Rivera, PSU’s executive director.

Student unions of course lack formal status under labor law. But that doesn’t stop them from exercising power in the same way workers’ unions do: through collective action.

In May, the Philadelphia Student Union helped organize a walkout of 5,000 students to oppose 23 school closings and deep cuts to art, music and counseling programs. Thanks in part to a past PSU victory—a new, less punitive discipline code that was implemented in the city last year—students were able to participate in the walkout without retaliation. Though the walkout failed ultimately to halt the budget cuts, Rivera says, it “demonstrated to students the power they have collectively, and that they could fight for their rights and not be punished for it.”

Intensifying attacks on public education have galvanized student-led groups in other cities, as well. The Newark Student Union, formed in 2011, also led a walkout of 1,000 students opposing $56 million in cuts to the school budget this April. The Providence Student Union organized a mock testing day this spring during which high schoolers administered the state-mandated New England Common Assessment Program to adults from the community, demonstrating that more than half of them would fail.

The potential power of student walkouts and boycotts is evidenced by the key role they played in another pivotal education battle: the desegregation of schools. Following the 1954 Brown v. Board of Education ruling that legally mandated that school segregation was unconstitutional, a vibrant student movement sprung up to challenge de facto school segregation in Chicago and other northern cities. In 1963, nearly half of Chicago’s students participated in a boycott opposing inadequate resources for black students and calling for the resignation of CPS Superintendent Benjamin Willis, who, in response to overcrowding at schools in black neighborhoods, had begun sending black children to school for half a day and housing them in glorified aluminum trailers called “mobile school units.” In cities like Philadelphia and Los Angeles, mass student walkouts helped win reforms, including implementation of African-American studies classes and increased hiring of Chicano teachers and administrators.

In many ways, the present-day fight against school closings is the successor to Civil Rights-era desegregation struggles, says Fannie Rushing, a professor of history at Benedictine University who helped organize the Chicago school boycotts at the age of 17 as a member of the Chicago Area Friends of SNCC. The boycotts successfully forced the eventual resignation of Willis and greater representation of African Americans on the city’s school board, but the legacy of school and neighborhood segregation in Chicago remained largely intact, laying the groundwork for the closing of schools deemed “underutilized” or “underperforming” in predominantly black and Latino communities.

Rushing, who also appears in a new documentary on the 1963 student boycott that will be released by Kartemquin Films next spring, believes that it holds crucial lessons for today’s education activists. While the past year’s student boycotts have been largely symbolic, the 1963 action was “designed to hit the school board in its pocketbook,” she notes, and became an organizing tool for the entire community. “The boycott showed what it was possible to do,” she says. “We need to make students and community activists in the city aware of the struggle that’s their patrimony—and that it’s possible for them to do it again.”

Members of the Chicago Students Union don’t doubt this.“As we see more and more cuts to public schools, more and more kids are realizing that this hurts them personally,” says Oswaldo Gomez, a senior at Lincoln Park High School. “Take me. Last year, I didn’t really understand what was going on. Now all of a sudden, boom, I’m an activist. That’s the power we want to bring to more students.”

The Italian Workers Fighting Like Hell to Shut Down Their Workplaces