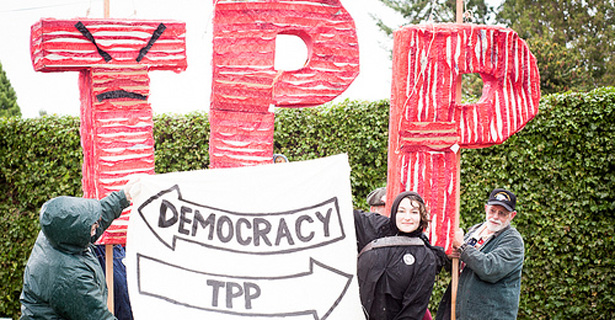 Protesters gather to oppose the Trans-Pacific Partnership in Peace Arch Park, on the U.S.-Canada border, in December 2012. (Photo by Cailie Frampton via Flickr.)

This week, 174 House members declared their opposition to fast-tracking the free-trade agreement.

'If they’re going to negotiate it [with little congressional input], then we should have that ability to have the proper review,' says Rep. Mark Pocan.

Opponents of the Trans-Pacific Partnership (TPP), a trade deal that’s been dubbed “NAFTA on steroids,” made major progress in the House this week, as lawmakers from both sides of the aisle signaled their unwillingness to grant the president authority to “fast-track” the TPP to a Congressional vote. Without fast-track, it’s unlikely that the trade agreement could pass Congress in its current form.

Until now, negotiations on the TPP, a free-trade agreement between 12 Pacific Rim economies including the United States, Canada, Australia, Japan, Singapore and Malaysia, have operated under the expectation that the Obama administration would be able to secure fast-track authority—a legislative procedure that would limit lawmakers to a simple up-or-down vote on the completed deal, shortening floor debate and prohibiting amendments. The administration, which strongly supports the TPP, has already asked Congress to vote for fast-track.

But on Tuesday, 23 House Republicans, led by Walter Jones (R-N.C.), issued a letter expressing their opposition to fast-track authority, citing constitutional concerns about Congress delegating away its ability to regulate trade. The following day, 151 Democrats, led by Rosa DeLauro (D-Conn.) and George Miller (D-Calif.), issued a separate letter expressing similar concerns. Taken together, this marks the strongest show of congressional opposition to the procedure yet.

Even more significant than the number legislators who have stated their opposition to fast-track is the diversity of the group, which is “pretty stunning,” says Lori Wallach, director of Public Citizen’s Global Trade Watch, which has helped lead efforts to raise awareness of the TPP and build opposition.

In addition to the free-trade skeptics on the Left, the Democratic letter was signed by a number of party heavyweights—including DCCC Chair Steve Israel, Assistant Minority Leader Jim Clyburn, and 18 of the 21 ranking House committee members—as well as some unlikely suspects: About half of the neoliberal New Democrats, a group that typically supports free-trade agreements, signed the letter. That adds up to three-quarters of the Democratic caucus in the House, sending a clear message to Minority Leader Nancy Pelosi that the party is at odds with the Obama administration on this issue. Meanwhile, on the Republican side, both moderates and Tea Party sympathizers have come out in opposition to fast-track.

The diversity of opposition is in many ways a testament to the massive scope of the TPP, which carries implications for issues ranging from food safety to copyright protections. First-term congressman Mark Pocan (D-Wis.), who’s taken a leading role in rallying fellow freshman Democrats against the deal, says that many left-leaning Democrats are concerned about the plan’s impact on jobs and on environmental and safety regulations. Much like NAFTA and other free-trade agreements over the last couple of decades, some economists predict that the TPP will result in domestic job losses. “We’ve lost a lot of manufacturing jobs in Wisconsin, largely due to bad trade deals in the past,” says Pocan. “This has been the wrong direction for our economy, the wrong direction for good-paying middle class jobs, and so it became a priority for me coming to Congress.” Along with 35 other first-term House Democrats, Pocan released a separate letter opposing fast-track back in June.

Other legislators have taken issue with provisions that would encourage companies to take states to court in special third-party tribunals over investment disputes. The prospect of foreign-staffed tribunals overriding domestic law has captured the attention of Democrats and Republicans alike. Rep. Jones has called those provisions a “total sellout of American sovereignty.” Another concern relates to the TPP’s chapter on intellectual property rights—a recent version of the chapter, published by Wikileaks on Wednesday, contained stringent copyright protections reminiscent of the doomed Stop Online Piracy Act (SOPA).

Many of the congressional representatives on the record against fast-track are disturbed by the plan’s general lack of transparency. The United States Trade Representative (USTR) has conducted its TPP negotiations—all 19 rounds—in secre, and with the exception of some individual chapters leaked to the press, the content of the TPP is known only to the negotiators and to hundreds of trade advisors, who are barred from disclosing information. Even members of Congress have to jump through hoops just to gain access to portions of the text, unless they're on the relevant committees.

Legislators say the cumbersome review process, combined with fast-track authority, ultimately infringes on their role as lawmakers. “Yes, you can sit down and look at some of the language without your staff and go through and find out what’s in the deal,” says Rep. Pocan. “But importantly, if they’re going to negotiate it [with little congressional input], then we should have that ability to have the proper review. And fast-track takes out that proper review. So if we don’t get it on the front end and don’t get it on the [back] end, it can potentially be a problem.”

Opponents of the TPP have long insisted that stopping Congress from granting fast-track authority would be the most effective way of derailing—or, at the very least, weakening—the agreement. Without fast-track in Congress, it’s likely that the TPP would be stripped of its most controversial provisions, and this week’s developments could throw a wrench into the ongoing TPP negotiations. But as negotiators head into the next round of talks, the TPP’s opponents are cautious not to underestimate the resilience of the deal’s powerful supporters.

“These big international trade agreements and fast-track are like [Jason] in the Friday the 13th movies—they keep coming back alive,” Wallach says. “And that is because there’s this huge corporate coalition pushing them. I would say that fast-track is definitely down after this announcement from all these members of Congress, but I don’t doubt the corporate coalition will continue to push it.”