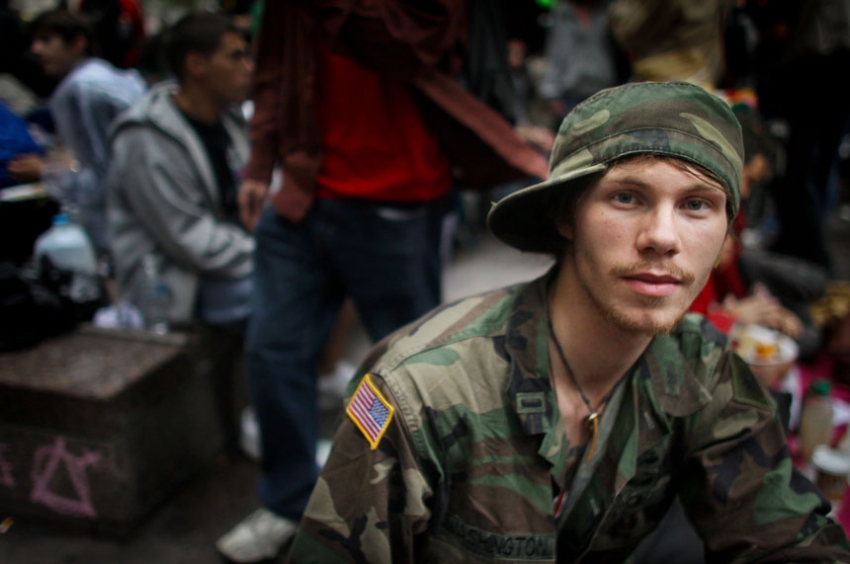 'For at least a year, they changed the national conversation and spotlighted the main enemy.' (Mario Tama/Getty)

If Occupy Is a Battle, the First Round Was a Success

Understanding that the tides of social movements bring challenges and victories.

'Movements ebb and flow. When they ebb, it’s not our fault. What is our fault is whether we have the foresight and capacity to prepare for both ebbing and flowing...'

For In These Times' December 2013 cover feature, “Generation Hopeless?”, the magazine asked a number of politically savvy people, younger and older, to respond to an essay by 22-year-old Occupy activist Matthew Richards in which he grapples with what the movement meant and whether Occupy’s unfulfilled promises are a lost cause or the seeds of the different world whose promise he glimpsed two years ago. Here is Carl Davidson's response:

Matthew Richard’s essay on Occupy was, for me, a trip back in time, to my rebel youth, nearly 50 years ago. In his voice, I heard the full range of my own ideas and feelings from those “glory days.” In the 1,000 battles I’ve been through since then, I’ve tempered, reframed and even changed some of those views. It would be easy enough for me, in commenting on the essay, to slip into the role of wise old grio. But that’s not what I want. So I offer a few remarks from a different role, that of “co-conspirator.” I made it to Zuccotti Park and a dozen other encampments, too.

First, I don’t think Occupy failed, or has even disappeared. But to understand why, you first have to grasp what it was.

Occupy was largely an elemental rising of the “precariat,” today’s new working class, a distressed young generation burdened with debt and facing a precarious future of frequent joblessness in a wider order of savage inequalities. They had the audacity to choose the right target, Wall Street. They had the wisdom to seek allies, the 99% vs. the 1%. For at least a year, they changed the national conversation and spotlighted the main enemy.

Which is not bad at all for your first round. Add to that the personal changes wrought by the communal solidarity of tens of thousands in the 600 Occupy encampments across the United States and on-again, off-again street battles with the police, and you have a new cadre of organizers birthed in rather large numbers.

Richards details the weaknesses as well as anyone. But again, it’s only the first round. One of the lessons I drew from the ’60s was that everything in the universe moves in waves—light, water and social movements, too. Movements ebb and flow. When they ebb, it’s not our fault. What is our fault is whether we have the foresight and capacity to prepare for both ebbing and flowing, to cast out the net when the tides are rising, and to pull it in and consolidate new organizations when they are ebbing, so as to prepare even better for the new surge.

That is a framework for hope. I still remember the quote Herbert Marcuse put on the final page of his 1964 book One-Dimensional Man. It was from Walter Benjamin, who wrote: “It is only for the sake of those without hope that hope is given to us.”