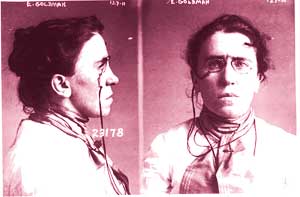 Dear Emma,
With his recent signing of the Unborn Victims of Violence Act, President George W. Bush has taken yet another step toward outlawing abortion. John Kerry, however, is a staunch advocate for pro-choice. Aren’t you excited about electing a president this November who will help to insure that a woman’s body remains her own?
Kerry-Crazed in Connecticut

Dear Kerry-Crazed,
“Women’s development, her freedom, her independence, must come from and through herself. First, by asserting herself as a personality, and not as a sex commodity. Second, by refusing the right to anyone over her body; by refusing to bear children, unless she wants them; by refusing to be a servant to God, the State, society, the husband, the family, etc., by making her life simpler, but deeper and richer. That is, by trying to learn the meaning and substance of life in all its complexities, by freeing herself from the fear of public opinion and public condemnation. Only that, and not the ballot will set the woman free, will make her a force hitherto unknown in the world, a force for real love, for peace, for harmony; a force of divine fire, of life-giving; a creator of free man and women.”
In Solidarity,
Emma

Dear Emma,
In his State of the Union address, President Bush asked Congress to double the funding for “abstinence-only” sex education, citing the need “to counter the negative influence of the culture, and to send the right messages to our children.” I’m no fan of Bush, but considering the willingness of our female pop stars to exploit themselves—with the full complicity of the media—I feel something needs to be done to give our children an alternative to our networks’ current All Sex, All the Time.

Could abstinence be the answer?
Befuddled in Boise

Dear Befuddled,
“Nowhere is woman treated according to the merit of her work, but rather as a sex. It is therefore almost inevitable that she should pay for her right to exist, to keep a position in whatever line, with sex favors. …

“It is a conceded fact that woman is being reared as a sex commodity, and yet she is kept in absolute ignorance of the meaning and importance of sex. Everything dealing with that subject is suppressed, and persons who attempt to bring light into this terrible darkness are persecuted and thrown into prison. Yet it … is due to this ignorance that the entire life and nature of the girl is thwarted and crippled. We have long ago taken it as a self-evident fact that the boy may follow the call of the wild; that is to say, that the boy may, as soon as his sex nature asserts itself, satisfy that nature; but our moralists are scandalized at the very thought that the nature of a girl should assert itself.”
In Solidarity,
Emma

Dear Emma,
As you were one of the most radical activists of the past two centuries, I’m sure you’re just as angry as I am about the Bush administration’s attempts to constitutionally ban same-sex marriages. Isn’t what gives marriage its “sanctity” the love shared by the two parties who enter into the institution, regardless of their gender?
Sizzling in San Francisco

Dear Sizzling,
“Love, the strongest and deepest element in all life, the harbinger of hope, of joy, of ecstasy; love, the defier of all laws, of all conventions; love, the freest, the most powerful moulder of human destiny; how can such an all-compelling force be synonymous with the poor little State and Church-begotten weed, marriage?

“Some day, some day men and women will rise, they will reach the mountain peak, they will meet big and strong and free, ready to receive, to partake, and to bask in the golden rays of love. What fancy, what imagination, what poetic genius can forsee even approximately the potentialities of such a force in the life of men and women. If the world is ever to give birth to true companionship and oneness, not marriage, but love will be the parent.”
In Solidarity,
Emma

Emma Goldman (1869-1940) was a nurse, anarchist, lecturer and revolutionary, who was twice arrested for violating the Comstock Law, which prohibited the distribution of birth-control literature. The preceding “answers” first appeared, respectively, in “Woman’s Suffrage” (1914), “The Traffic in Women” (1910) and “Marriage and Love” (1916).