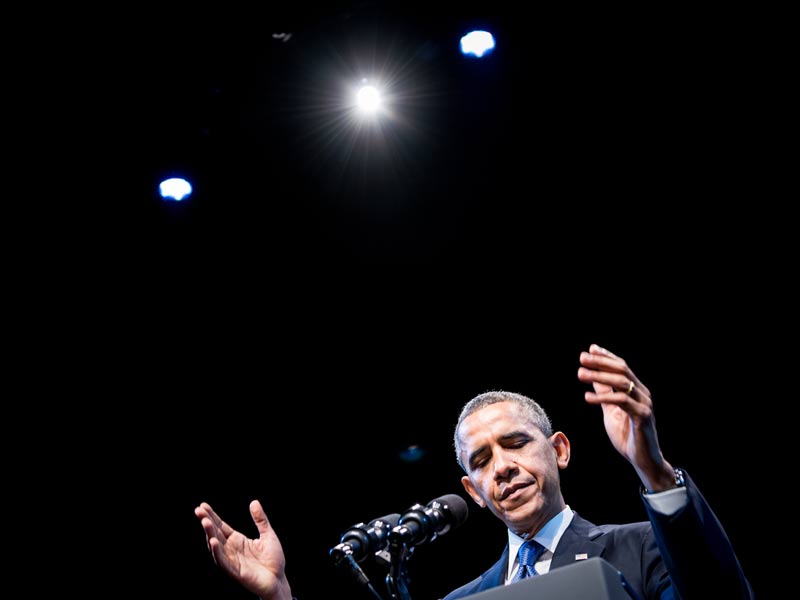 'The basic bargain at the heart of our economy has frayed,' said Obama in his much-heralded speech.

The president claims ‘the opportunity gap in America is now as much about class as it is about race.’ Is it?

One’s class fundamentally shapes one’s social and economic path. But it alone does not account for how poverty, unemployment and wage inequality affect African-American and Latino communities, nor the role of racial discrimination in the persistence of poverty.

In his Dec. 4, 2013 speech about the growing divide between rich and poor in the United States, President Barack Obama went so far as to describe inequality as “the defining challenge of our time.” And for good reason: Since Obama took office, the ranks of the poor have grown by nearly six million, bringing the total to a staggering 49.7 million Americans whose income is parked below the federal poverty line, roughly $23,500 a year for a family of four.

But many in the media zeroed in on a narrower point the president made when he portrayed poverty as a phenomenon that transcends race and place, saying, “[The] opportunity gap in America is now as much about class as it is about race, and that gap is growing.”

The Daily Beast’s Jamelle Bouie argued that by addressing the belief among some white voters that anti-poverty policies help the “undeserving poor”—i.e., non- whites—Obama hit a political home run. Many others uncritically repeated Obama’s point that class is as important a determinant of poverty as race.

The truth, however, is more  complicated. Of course, one’s class  fundamentally shapes one’s social  and economic path. But it alone does not account for how poverty, unemployment and wage inequality affect African-American and Latino communities, nor the role of racial discrimination in the persistence of poverty.

In one respect, the recognition of white poverty under- scores how poverty is consuming ever greater portions of America. There are 19 million poor white people in the United States—and that number is growing. A startling 76 percent of whites will encounter periods of joblessness, welfare or poverty in their lifetimes.

However, even as the ranks of the white poor have swelled, Black America has been in economic freefall. Since 2000, while the proportion of white Americans below the poverty line grew by about 3 percent, to 12.7 percent, the percentage of Black Americans who are poor jumped nearly 5 percent, to 27.2 percent. Meanwhile, Latinos and Blacks were hit harder by the housing downturn than whites, losing much more of their net wealth (44 percent and 31 percent, respectively, compared to 11 percent). And throughout the recession and recovery, Black unemployment has remained twice as high as white unemployment.

The point is not just to show who has it worse, but to highlight how racial discrimination in employment, housing, education and beyond exacerbates poverty among African Americans. From Kennedy to Obama, U.S. politicians have insisted that “a rising tide lifts all boats.” Yet African Americans have remained disproportionately poor and unemployed over the last 50 years—including the economic high points of the postwar expansion and the 1990s.

Racial discrimination does not just show up in poverty, employment and net wealth. It also affects upward mobility, determining access to high-quality public education, college and the kinds of networks that lead to well-paying jobs, better housing and a higher quality of life. This is precisely why we still need affirmative action and other programs aimed at systematically remedying historical and current anti-Black discrimination.

Any movement for racial justice will need to grapple with the question of why so many Black and Brown workers end up in dead-end, low-wage work in the first place. This is ultimately where Obama’s speech fell flat. Instead of “turning the page” on race in order to focus on class, we must understand how race compounds class inequality—which in turn requires acknowledging that racism is still alive and well in the U.S.

We cannot hold our breath and wait for Obama to tackle these problems. He has shown little will to address racism head-on, and despite his speech, he offered no new programs or new money to address the crisis of inequality.

Instead, our best hope lies in the low-wage workers and other anti-poverty activists who have taken to the streets over the past year. People of color are overrepresented in their ranks: Twenty percent of Walmart workers are African American, making it the largest employer of African Americans. Blacks and Latinos account for 40 percent of all low-wage workers. The emergent low-wage workers’ movement is providing an example of how to address the growing gap between rich and poor, and it has the potential to become a movement for racial justice as well.