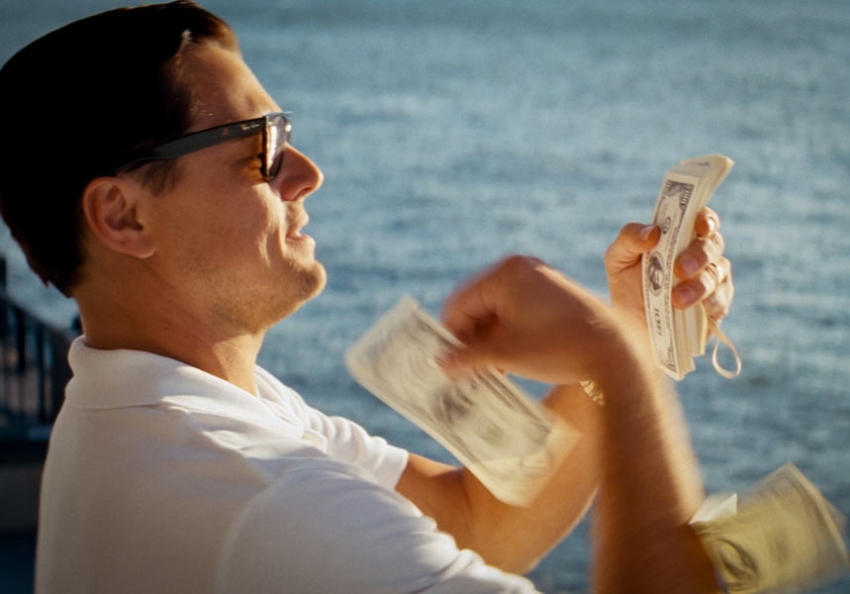 Throwing Satire to the Wolf

Scorsese’s latest is a romp through vicarious amorality.

Scorsese’s agenda is obvious: to immerse us in the amoral, money-hungry bad behavior of his characters, and to juice the hedonism so wildly that we can’t help but enjoy it vicariously and become implicated in the Sadean mess.

The kerfuffle raging over Martin Scorsese’s The Wolf of Wall Street and the question it’s raised—does a film need to articulate outrage in order to be said to own any at all?—are so much more fascinating than the film itself that it’s tempting to think Scorsese deliberately packed the conundrum into his movie’s DNA. Which invites a second question: Could he have been planning that deeply and still make such a crude and repetitious film?

The disconnect—between viewers who think Wolf is a satiric epic of all-American venery and those who find it an abrasive, patience-testing endorsement for what it tries to satirize—seems too extreme to have been intentional, and the debate boils down to one vexing issue: How should a film express its own moral point of view? Does the acute depiction of ridiculous evil constitute endorsement or interrogation—or does it depend entirely on how the depiction is slanted, devised or expressed? Wolf tells the tale of Jordan Belfort, a scruple-free, dope-stoked penny-stock sales-master whose various legal and illegal schemes in the late ’80s made him richer than God and as indulgent as a Roman emperor. Scorsese’s agenda is obvious for every one of Wolf’s 179 minutes: to immerse us in the amoral, money-hungry bad behavior of his characters, and to juice the hedonism so wildly that we can’t help but enjoy it vicariously and become implicated in the Sadean mess.

The sheer simplicity of this aesthetic is seductive, and many smart critics have been suckered by it. With its constant first-person address (often via DiCaprio speaking right to the camera) and party-hearty vibe, the film bends over backward to “make” you feel the electric buzz of profligacy—spending money like air, blowing coke up a prostitute’s ass, sinking a yacht without a moment’s compunction, and so on. This basic function provides, the film’s fans maintain, a scathing measure of ethical intent, by “making” us question our own enjoyment.

The problem is, many of us have no patience for films that struggle to “make” us do anything, or attempt to place us in a moral quandary we didn’t choose. Watching Wolf, I not only didn’t feel “implicated” in the shenanigans, I became offended by the film’s presumptuous effort to put me in that position. Often enough the film’s berserk cast of Caligulas were funny in a stratospheric-Animal House kind of way, but at no time did I consider them as avatars for myself. I was not implicated in their rampaging idiocy, nor was the effect of being saturated with their debauchery all that much fun. How could it be, when they’re all such preening, blabbering, irresponsible fools?

The model here is Scorsese’s own, masterful Goodfellas (1990), but the differences are instructive: The earlier film’s direct address to the camera, aped in all but substance by DiCaprio’s Belfort, was leavened by Ray Liotta’s bruised innocence, as the mobsters around him routinely plummeted into savage violence that terrified even him. You saw victims in that movie, and tasted the carbon burn of danger.

In Wolf, the victims of Belfort’s financial chicanery are all off-screen, which leaves us only with the howling sales-monkeys at center stage, gobbling Quaaludes and standing on tables. It’s a consciously one-sided portrait—not unlike the Hollywood war films that act as though American invasions are things that happened only to Americans.

This is not to even address the film’s treatment of its women, the vast majority of which are cartoon shrikes or whores or both. Is it a satire on how women are objectified by drugged-up stockbroker culture, or is it just such an objectification? Again, Scorsese has stripped his loudmouthed film of any cues or perspectives that might suggest any personality or point of view other than Belfort’s, which we’re supposed to relish-with-guilt.

But what if we don’t? I don’t doubt Scorsese’s mocking disapproval of his characters’ actions, but we can all sense, also, a sympathetic pleasure taken from the turpitude and the wife-beating and the king-of-the-world narcissism. Scorsese’s filmography is tattooed with these indulgences, after all. The Wolf of Wall Street may implicitly feign moral indignation, but it also suffers from its own Belfortian tunnel vision.