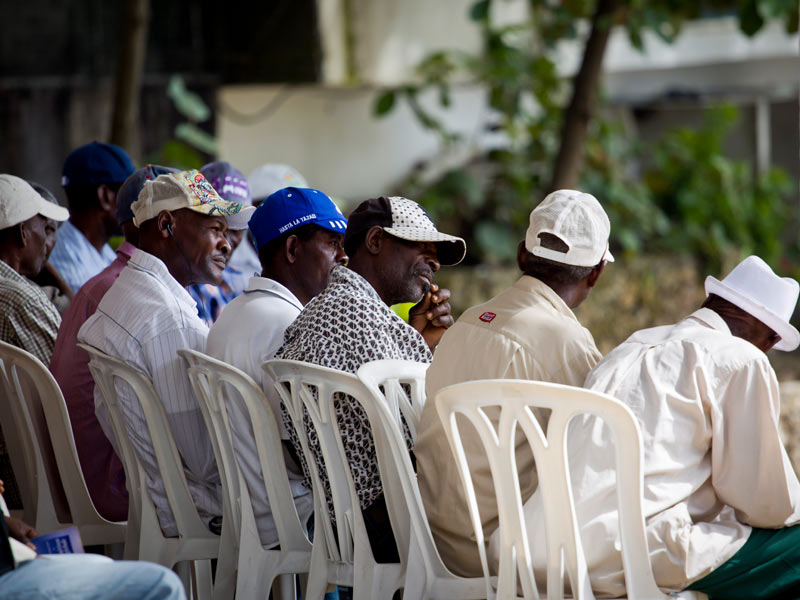 Haitian-Dominicans meet with the Inter-American Commission of Human Rights in Santo Domingo on December 5; the commission later ruled their human rights had been violated. (Erika Santelices / AFP / Getty)

Thousands of Haitian-Dominicans were stripped of Dominican citizenship. Where’s the U.S. outrage?

But the U.S. did not speak up. It wasn’t until mid-December, three months after the decree became law and more than 300 Haitian-Dominicans had been deported in spite of the DR’s assurance that no such actions would be taken, that the U.S. expressed “deep concern” about the situation.

About 200,000 Haitian-Dominicans woke up one morning in September 2013 to find that the Dominican Republic’s Supreme Court of Justice had left their citizenship in doubt. They no longer held valid birth certificates, could no longer practice certain professions (such as law) and no longer had the right to vote. Even cashing a check had become a legal challenge.

The result of the manipulation of existing citizenship laws and the stacking of the Supreme Court by powerful politicians, the court decision broadened the category of non-citizen “persons in transit” to include anyone without documents—no matter if they’ve been in the DR for decades. The redefinition effectively nullifies citizenship, not just for first-generation immigrants, but for the descendants of anyone who arrived in the country after 1929. In practical terms, that overwhelmingly affects Haitian-Dominicans, most of whom know no other country than the DR and no other language but Spanish, and who consider themselves thoroughly Dominican. The history of Haitians in the DR, where about 11 percent of the population is black and 73 percent is mixedrace, has been fraught; a 2007 United Nations report called out the DR for racism and discrimination against its black neighbors and their descendants.

At 1.5 million strong, Dominicans are the fifth-largest Latin American immigrant group in the United States. So one might think that the U.S.—led by its first black president—might have, at the very least, issued a few words of protest.

But the U.S. did not speak up. It wasn’t until mid-December, three months after the decree became law and more than 300 Haitian-Dominicans had been deported in spite of the DR’s assurance that no such actions would be taken, that the U.S. expressed “deep concern” about the situation.

If the court decision and the machinations that led to it are shameful because of their blatant racism, the limp U.S. response is no less so. The UN Commissioner for Human Rights and Amnesty International both blasted the court decision within days. Other leaders in the region also responded, particularly Ralph Gonsalves, prime minister of St. Vincent and the Grenadines, who has led the effort to rebuke the DR through international forums such as the 15-state Caribbean Community and Common Market and the recent Havana-based meeting of the Community of Latin American and Caribbean States (CELAC).

At the CELAC meeting, DR President Danilo Medina hit back: In reference to Haitian-Dominicans’ citizenship, he said, “You can’t take away something they don’t have.” (DR journalist Marino Zapete delivered a rebuttal, noting that changes in the 2010 constitution appear to make it illegal to apply the court decision retroactively.)

None of Gonsalves’ activism, or that of Venezuelan President Nicolás Maduro, who has also spoken out on the matter, diminishes the absence of the U.S. in the conversation. Besides rendering laughable any U.S. claim to give a damn about Latin America, the U.S. decision to stay out of the issue means that the biggest weapon with which to pressure DR officials has been removed from the playing fields: capital. Just consider that U.S. imports from the DR totaled more than $4.4 billion in 2012 and constitute 65 percent of all DR trade.

Sure, the U.S. has a nasty history with the DR: two military invasions and life support to a brutal 30-year dictatorship, for starters. But this is a missed opportunity to actually do the right thing, to engage Latin America (a promise made but never kept by the Obama administration) and to work diplomatically with regional leaders such as Gonsalves on a matter of mutual interest.

In the meantime, back in the DR, the turmoil caused by the decision has seen former President Leonel Fernández making Alice in Wonderland-like declarations about Dominicans’ inability to be racist because of their own mixed-race heritage, government lackeys making menacing statements to writer Junot Díaz for protesting the decision, and in late January, the murder of a Haitian vendor with what appears to be strong racial overtones.

How does this end? The United States, the country with the highest percentage of Dominicans outside of Hispaniola, apparently doesn’t care.