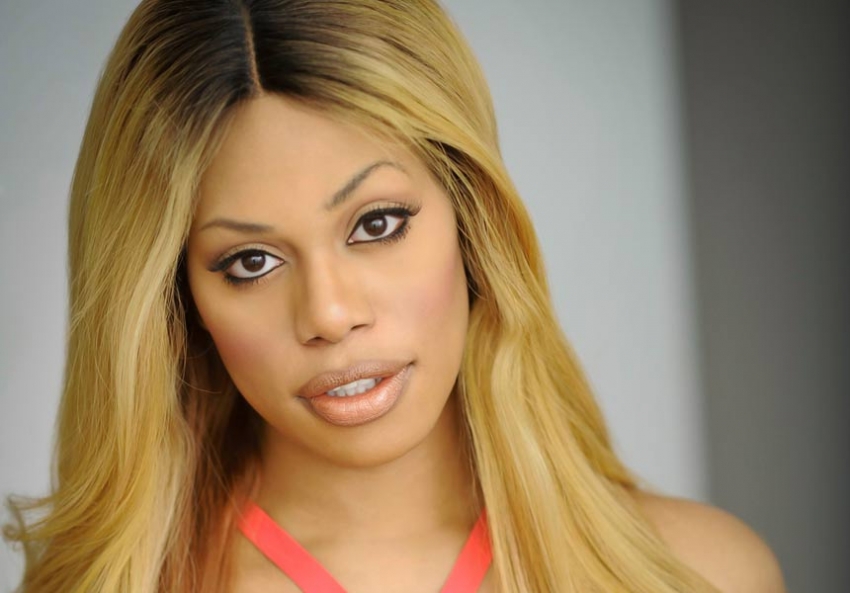 Laverne Cox is using her star power for advocacy. (Courtesy of B/W/R)

The trailblazing Orange is the New Black star has become a powerful voice for trans people, including CeCe McDonald.

'I think the media is really comfortable reading about trans women of color as victims after they die, but if we have the audacity to survive, we are immediately criminalized.'

As Sophia Burset, the only trans character in Orange is the New Black—the hit Netflix show about a women’s prison—Laverne Cox is breaking new ground as a transgender actor in a field where trans women are still rare. But Cox is also gaining fame for her powerful off-screen politics as she advocates for transgender rights.

Most recently, Cox has lent both her star power and her organizing power to the case of CeCe McDonald, an African-American trans woman sentenced to 41 months in prison for a killing she says occurred in self-defense. In 2011, a group of white people taunted McDonald and her friends with racist and transphobic epithets outside a bar in Minneapolis. In the ensuing altercation, McDonald defended herself with scissors from her purse. She was wounded and a white man, Dean Schmitz, was killed. McDonald was convicted of second-degree murder.

McDonald’s case became a flash point for trans activists because of several perceived injustices in her trial and sentencing. First, the judge barred expert testimony about the everyday violence faced by trans people, which would have been used to support the case for self-defense. Then McDonald was sent to a men’s prison—where trans women face not only a high risk of violence, but also the trauma of being stripped of their gender.

When McDonald was released early on parole this January, Cox was among those waiting to greet her. Cox is working with director Jacqueline Gares on Free CeCe, a film documenting McDonald’s first year out of prison.

Cox spoke with In These Times about why McDonald’s case moved her, the future of trans acting and activism, and what’s next for Orange is the New Black.

What inspired you to make a documentary about CeCe McDonald?

I became aware of CeCe’s case a few weeks after it happened. Her case spoke so much to me because I could very easily have been her. CeCe was just walking down the street with a group of her friends when she was attacked. Often, I’ve been just walking down the street and heard anti-trans and racist slurs, and I was even kicked on the street once. So many trans women don’t survive these kinds of attacks. In 2012, 53 percent of homicides in the LGBTQ community were trans women, and 73 percent [of all homicides] are people of color. So the film is also about the culture of violence against trans women as an epidemic.

Advocating for her case wasn’t hard for me because this woman is a survivor. She did not want to die that day. I asked CeCe, during my interview with her, “Do you think if you had not pulled those scissors out, that he would have killed you?” And she said, “Yes.” He was charging and lunging at her with hate in his eyes and—not to retry the case—but this is a white supremacist with a swastika tattooed on his chest, and she feared for her life.

Yet the initial media coverage was sympathetic to Schmitz and not McDonald. Why do you think that is?

The coverage was transphobic and transmisogynistic and racist. What Billy Navarro, one of her major advocates, said to me when I interviewed him was, “The media was so upset with CeCe because she had the audacity to survive.”

I think the media is really comfortable reading about trans women of color as victims after they die, but if we have the audacity to survive, we are immediately criminalized; that is what the system does. The intersecting transphobia, transmisogyny, racism and classism in the criminal justice system—all of that converged in her story. CeCe was arrested on the spot that night; no one else was arrested. It took them [nearly] a year to arrest the person who smashed a glass into CeCe’s face. Because I’m on a show that looks at the injustice of the criminal justice system, it’s a no-brainer for me to be involved in this project.

You’ve talked about these issues on Katie Couric’s show. How do you go about making these complicated analyses to general audiences who are more used to, as you point out, feeling sorry for trans people who die than advocating for survivors?

I’ve been so inspired by folks at the Sylvia Rivera Law Project, the Audre Lorde Project, Queers for Economic Justice (which doesn't exist anymore) and so many radical folks who have spoken about intersectionality. My Black identity doesn’t go away because I’m trans, and the forces of racism don’t go away because I’m trans; they actually are compounded by transphobia and transmisogyny. I’d be doing myself and my community a disservice if I didn’t speak in an intersectional way.

You are one of the few trans actors, period. You’ve talked about the need for nuanced trans characters, instead of the usual stereotypical and problematic ones. But does nuanced always have to mean a good person? Can you play, for instance, a murderer?

Looking at the evolution of Black representation in the media, or of gay and lesbian representation, it’s difficult and it takes time. I’ve always believed it’s about having multiple stories out there about different kinds of people. I’m against the idea of positive versus negative representation. I would love to play a really interesting, complicated murderer. Those are the roles I live for.

We’ve seen actors who are cisgender (not trans) playing trans characters in film and television. Are we nearing a time when a trans actor might, for instance, play a cisgender woman?

I absolutely believe it’s possible. It starts with directors, writers and producers saying, “Laverne is a wonderful actress and she’s right for this part, so let’s cast her” [laughs]. I’ve played a couple of roles onstage, and a character in a film called The Exhibitionists, that weren’t written for trans actors.

You met CeCe McDonald face-to-face for the first time just after she was released. What was it like to meet the woman for whom you’d been advocating?

CeCe is a young, vibrant, remarkable woman. She’d heard Beyoncé’s album in prison, but she hadn’t seen the video, so two hours after she got out of prison we were watching it and talking about Beyoncé and jamming in this diner. She said that in [the men’s] prison, they were trying to strip her of her womanhood and her trans life, so she just wants to celebrate those things when she gets out, and she’s doing that.

Would you describe yourself as a prison abolitionist?

That’s something I’ve sort of gone back and forth with. From talking to CeCe and her supporters, it does seem like abolishing prisons is the way to go. But then, for the folks who are already serving time: What can we do to make their time more humane and more safe? The people inside need help now; they need support, policies and advocacy.

What do you think needs to fundamentally shift in the LGBTQ mainstream movement, so that it takes trans issues, and especially prison issues, into consideration?

Most of it is actually having trans people, particularly trans people of color, in leadership positions in LGBTQ organizations, [beyond] tokenizing. It’s also important for each and every one of us, no matter who we are, to interrogate our own internalized transphobia, homophobia, racism and classism. And also to get resources to the folks who are doing the work on the ground—like Katie Burgess and other grassroots activists in Minneapolis, who brought CeCe’s story to international audiences and advocated fiercely for her. They did that with basically no resources; what could they do if they actually had money to advocate?

On that note, how can people support your film?

We’re probably looking at another year of production, and we need funding. People can donate via Indiegogo or at FreeCeceDocumentary.net.

Can you tell us anything about the next season of Orange is the New Black?

Oh my, it’s really, really juicy. It’s really fantastic. All that I can say without giving too much away is that [actor] Lorraine Toussaint has joined our cast, and Lorraine is major [laughs]. Her character really stirs the pot. Expect the unexpected with this season.

Yasmin Nair is a writer and activist based in Uptown, Chicago. She's a co-founder of the radical queer editorial collective Against Equality and the Volunteer Policy Director of Gender JUST. Her writing can be found at www.yasminnair.net.