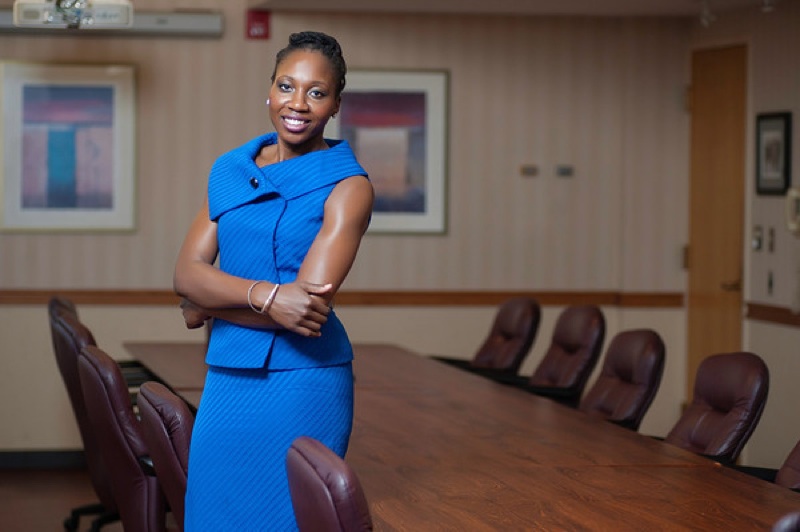 Amara Enyia says the Emanuel administration’s culture of intimidation is a major reason she is so determined to unseat him. (Photo courtesy Amara Enyia)

Amara Enyia, who plans to run for mayor of Chicago in 2015, certainly isn’t.

The political system needs to be obliterated and we need something new and different. The status quo doesn’t work—at least, it doesn’t work for too many people.

That’s because Enyia, a 30-year-old municipal consultant and community organizer, is planning to run against Emanuel in the February 2015 mayoral race. Though Emanuel is known for his abrasive style and attention-getting stunts—such as sending a dead fish in the mail to a pollster—Enyia scoffs at the idea of being afraid of him.

Enyia herself was raised by activists. Her parents fought in Nigeria’s civil war and, later, against dictators Ibrahim Babangida and Sani Abacha. Even after Enyia’s parents migrated to the Chicago suburbs, “the government actually sent emissaries all the way from Nigeria” to question them about their activism in their home country, says Enyia, who as a child thought the visitors were friends of her parents. Only later did they tell her the truth. Enyia’s family also faced pressure from politicians and civic leaders in the United States for speaking out against American leaders, including former Senator Carol Moseley Braun, for maintaining close ties with Abacha. Hence, Enyia says she is not cowed by the Emanuel camp. In fact, the administration’s culture of intimidation is a major reason she is so determined to run against—and ultimately unseat—him.

After simultaneously obtaining a law degree and a doctorate in educational policy studies at the University of Illinois, Enyia worked in former Mayor Richard M. Daley’s office on a fellowship, focusing on a wide range of issues that included economic development and transportation. Though she says the stint with Daley was a rich learning experience, it also left her frustrated with the constraints of trying to change policy through City Hall. So when Daley’s term ended, she says, she “headed straight to the West Side.” There, she spent about a year as executive director of Austin Coming Together, a community organization based in a predominantly African-American neighborhood heavily impacted by disinvestment, foreclosures and poverty.

Today, Enyia does municipal consulting through the firm she founded, ACE Municipal Partners, in addition to continuing her work with community groups in Austin and other hard-hit Chicago neighborhoods, including Englewood and Roseland on the South Side. She also offers her thoughts on urban planning, culture, politics and global travel—she speaks Igbo, Portuguese, Spanish and French—on her blog The Municipal Maven; she spends her scant remaining spare time competing in marathons and triathlons. In These Times talked recently with Enyia about what may be the biggest race of her life.

You had planned to announce your campaign on February 11, but you say the event was canceled because board members at the venue where you planned to make the announcement were concerned about the reaction from the mayor. What does that indicate about the current administration?

For there to be that level of fear of leadership—that’s wrong. People are living in such dire circumstances, and they feel they cannot speak up or advocate because they’re afraid of retribution. That fear paralyzes them from being able to speak up and demand better from their government. I hope that someone would see what I’m doing and think, “This random girl is challenging him—maybe I can do something.” It doesn’t have to be running for office; it can be doing something in their community to break that fear. We’re talking about people power. People have brought down dictators of entire countries and risked their lives. With Rahm Emanuel, let’s have some perspective and just be glad we can vote him out!

Mayor Daley was also powerful; how did his style compare to Mayor Emanuel’s? Did people ever fear Daley in that way?

They have two different styles of governing. One thing Daley understood was how to leverage relationships. He would engage with people whether he liked them or not. With Daley, for better or worse, you knew deep down he really loved the city—it was in his blood. Under this administration, there’s no understanding of the importance of relationships. There’s a sense of indifference. Rahm wants to be mayor of Chicago, but that doesn’t translate into caring about the city as a whole. That’s why you have so many parts of the city that are completely neglected.

What about the widely held belief that Chicagoans feel like electing the anointed mayoral candidate is inevitable, and that—no offense—there won’t be a valid opponent challenging Rahm, same as Daley?

I don’t agree that [Chicagoans] want a tough-guy mayor who’s going to curse you out. I think we’ve had enough of that. We want a mayor who inspires people, not one who instills fear in people. I think people are ready for a change—for leadership that shares their values of integrity in transparency and equity. It’s not even about pitting the haves against the have-nots. My message is the city will never be as great as it can be unless we all grow together. What impacts [someone] living in Lincoln Park impacts someone in Humboldt Park, and vice versa. The violence in Back of the Yards impacts [someone] even if [they] live in Edgewater. It’s one city; we all rise together.

As a specialist in urban planning, what do you think of the things Emanuel’s received global accolades for? He’s become famous for his transportation and startup business innovations and clean energy initiatives—do you think they’re effective?

Some of it’s good, but again, it comes down to this issue of equity and where those advances are taking place. For 20-some years, as a matter of policy we focused on downtown. The goal was to create this global world-class city, but that happened at the expense of the rest of it. Under the current administration, that divide has continued. We can put as many resources into the downtown areas as we want—but without targeted investment in [low-income] neighborhoods and communities, all we’re doing is creating a much more stark dichotomy between downtown and the rest of Chicago.

Though you have an impressive résumé, you’re only 30 years old. What do you say to people who think you’re not qualified to be mayor?

I have no concerns about the weight of running the city; I can do that. The issue for me is this broader one of what leadership should look like in the city. How do you transform the way people think and see themselves? That’s how you facilitate transformative change. I think the city needs that: The political system needs to be obliterated and we need something new and different. The status quo doesn’t work—at least, it doesn’t work for too many people. Now we have a unique opportunity to chart a new path.

We have to present an alternative vision for the city. For me, it’s a vision of the city that cares about all the neighborhoods, values public assets, and values people regardless of their ethnicity, socioeconomic status or geography. It’s a Chicago that talks about equity and enacts policies that reflect notions of equity. A Chicago where people aren’t scared of their mayor.

Does that vision exist already among different organizations and community leaders?

I think it exists—whether you talk to a random person on the street or members of organizations, people are agitating for that alternative vision. For example, when it comes to education, groups like Action Now, the CTU (Chicago Teachers Union), Parents for Teachers and Raise Your Hand are taking action.

Speaking of education, what do you think of Rahm’s handling of Chicago Public Schools, and what would you do on that front?

CPS, under the leadership of the mayor, underestimates simple good faith and respecting people, not lying to them. CPS made so many needless missteps. If [you’re] going to close 50 schools, just tell the community you’re going to close 50 schools because you can’t afford to keep them open. People will be angry, but they will appreciate the fact you told them straight out—you didn’t try to come up with all these different false misleading reasons to justify it.  What CPS did under the mayor’s leadership was come up with all these fake half-baked reasons [for closing specific schools], and once things started to unravel they spent all this time in damage control and came up with these processes of engagement that were for show. Then they wondered why nobody trusts them!

I did my [doctoral] dissertation on good faith in school policy. When all this was happening, I was shaking my head, thinking, they should have just read my dissertation. I have no illusions of easy answers, but respect people enough to tell them the truth and take their input in developing a way forward.

Realistically, do you think you have any chance to win the mayoral race?

No one in history who has changed things did it by being realistic. My dad always said revolutions never come from people in the status quo; they come from those on the outside. You can’t be “realistic” when it comes to these things that are truly transforming. There’s a certain “delusional” quality that you have to have, because you see something that other people don’t see.

For me, being realistic is being mediocre. It’s telling the guy on the street in Lawndale that this is it—this is as good as it’s going to get. I’ve seen otherwise. By running for office I want to reveal to him what I see, with the hope that he sees it too.