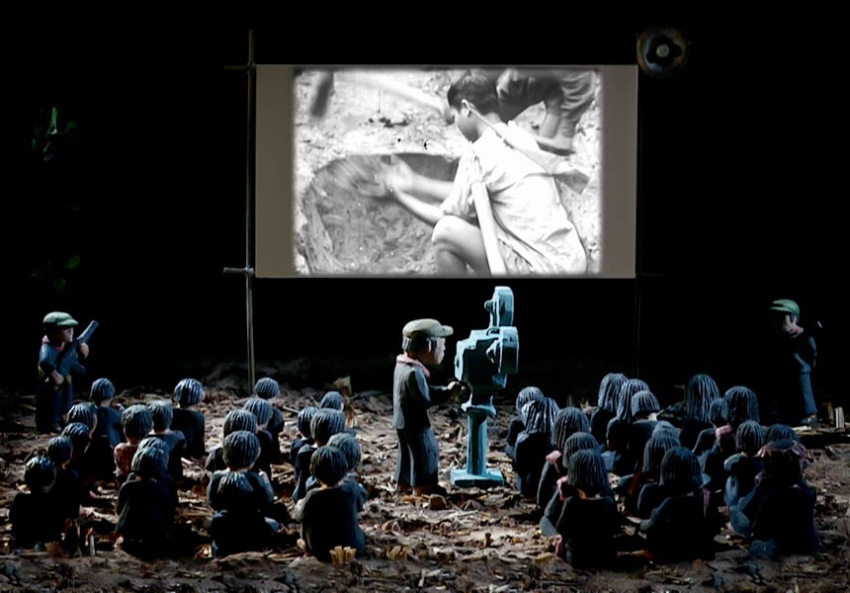 For Cambodian Documentarians, a Conundrum

How do you show the past when the Khmer Rouge torched all traces?

One of the takeaways of The Missing Picture is the inescapable void left by totalitarian destruction—if you destroy the materials of memory, eventually memory will die.

Political non-fiction cinema may not have ever come up against a challenge as formidable as the legacy of Cambodia. Only recently have Cambodian filmmakers attempted to document what happened there between 1975 and 1979, a project akin to trying to photograph a memory. This is because the Khmer Rouge had a radically single-minded, hyper-Maoist agenda to scour the nation of existing culture. Movies, records, family photos, books—everything was torched. In less than four years, the nation became a cultural crater.

Today, what’s a Cambodian documentarian to do? Rithy Panh, a childhood alum of the Rouge “rehabilitation” camps, has been fearlessly creative about reconstituting his country’s trauma. His quarter-century-long filmography includes traditional Patricio Guzmán-style excavations and interviews, but took a leap forward with S21: The Khmer Rouge Killing Machine (2003) and Duch, Master of the Forges of Hell (2011), two interrogatory films that interview the Rouge genocidists front and center, not their victims. It’s a surreal strategy, subsequently taken up by Joshua Oppenheimer in his remarkable Indonesia autopsy The Act of Killing (2012), that’s enabled by aging mass murderers’ willingness—or in the case of Oppenheimer’s film, zeal—to testify matter-of-factly about their crimes, creating a discombobulating view of Arendtian “banality” that’s more chilling than self-evidently psychopathic evil.

Panh’s new film, The Missing Picture (2013), recreates the experience under the Rouge by juxtaposing the regime’s cartoonishly unconvincing propaganda films (in which the enslaved toil happily in the fields and applaud their new rulers) with handmade clay-figure dioramas pantomining Panh’s childhood memories of ritual, torture, labor and indoctrination. The childlike use of the clay figures is a profound and poetic device, both necessary (to replace personal documentary evidence that doesn’t exist) and inventive, particularly when the figures are caught mutely watching propaganda footage in a tabletop village square.

One of the takeaways of The Missing Picture is the inescapable void left by totalitarian destruction—if you destroy the materials of memory, eventually memory will die. Another film chasing this ghost, Davy Chou’s doc Golden Slumbers (2011), laments the erasure of Cambodian cinema. Chou, a French-born Cambodian filmmaker, didn’t realize until his 20s that his grandfather Van Chann was one of Cambodia’s most illustrious and productive movie producers, and that he lorded over a Cambodian “golden age,” from 1960 (the year the first Cambodian feature was likely to have been made, though nobody’s certain) to 1975. In that time, about 400 films were produced, and Phnom Penh, with 30-plus movie houses, fostered a real culture of movie love and fan worship. The Khmer Rouge, along with abolishing education, finance and commerce, killed scores of directors, actors and technicians, and burned every reel of film they found. By 1979, Cambodian cinema could be said to no longer exist.

There are no film clips in the documentary—it’s a movie about a ghost cinema, about movies that exist as memories, rumors, plastic consciousnesses that rampaged through this corner of Asia and vanished, leaving only ephemera and fading recall.

Many of the capital’s old palace theaters are still standing, and Chou visits one that has in the ensuing decades been turned into a huge squatters’ ghetto, with more than 100 families dividing the cavernous space into tiny living spaces. He asks them about the old movies, of course, and they strain to evoke the intense viewing experience they had years earlier, right where they are now forced to take shelter. It’s as though the entire nation had lost its collective memory to an inflicted case of cultural Alzheimer’s.

This large project of cultural recovery has only gotten started—another new doc, John Pirozzi’s Don’t Think I’ve Forgotten: Cambodia’s Lost Rock and Roll, will surely not be the last film to attempt to reassemble the most thoroughly incinerated society of the 20th century. This is cinema, after all: life memorialized via the construction of stories. The race is on, against the inexorable tide of forgetfulness.