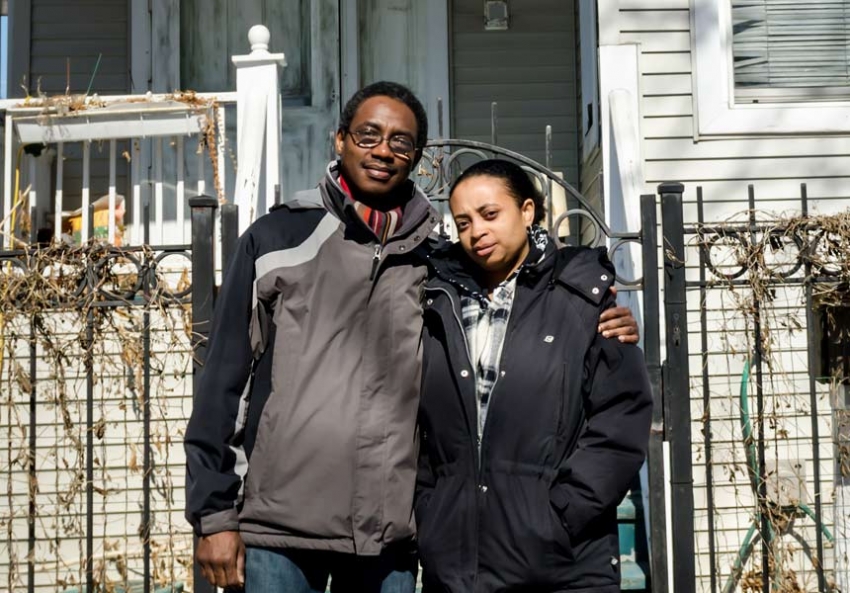 Kicked Out of Our Home, Courtesy of Blackstone

How an eviction, two arrests and one lost turtle led us to housing activism.

We believe that Invitation Homes' treatment of us was illegal: We were essentially evicted by the police at the company's discretion. Letting this stand unchallenged could have far-reaching implications.

At the height of the foreclosure crisis in 2011, when there were five times more vacant homes than homeless people in the United States, activists began pursuing a very simple solution: moving homeless people into people-less homes. We were one such family. In February 2013, after we lost our Section 8 housing voucher and were evicted from our subsidized apartment, we moved with our two teenage children into a vacant home in the Rogers Park neighborhood on Chicago’s North Side. That’s where we collided head-on with the investment giant Blackstone Group’s massive operation to purchase foreclosed homes.

In April 2013, we opened the door to a barrage of questions from a man we had never met.

“Do you live here?” he asked. “Do you have papers for this house?”

We didn’t know it yet, but we had just met a representative of Invitation Homes. One of the first houses the company purchased in Chicago was the one we were staying in. The house had fallen into foreclosure in 2008 and was eventually repossessed by the Bank of New York Mellon. There was some question as to whether the home had been foreclosed on wrongfully. The law firm representing the bank in the proceedings, Fisher & Shapiro, was sued in 2011 for falsifying more than 1,500 affidavits in its foreclosure cases, including this one.

Neighbors told us that the home had been vacant for several years. For the most part, they greeted us happily, glad to have the house occupied again. When we moved in, mold sat thick on the walls. We enlisted a group of friends and spent about $1,000 of our own money on renovations.

The man who came to our door that day in April didn’t identify himself. We told him that we lived there but didn’t have papers, and he left. From the tone of the interaction, we assumed that he was calling the police. In Cook County, Ill., evictions are a civil matter—they must go through the proper court proceedings, and can be carried out only by the sheriff. But banks do sometimes charge housing occupiers with trespassing. We knew the risks. What we hadn’t expected was the level of aggression we would meet.

The police arrived a few minutes later with a tactical squad about 10 officers strong, as though some kind of violent criminal activity was taking place. One officer climbed through the window and pointed a gun at Carmilla’s head. He handcuffed us in the kitchen and walked us outside. The police searched the home and our private possessions, even reading pages of Michael’s journal aloud. We believe that they were trying to humiliate us. They then took us to the police station. The children, at school at the time, were left to wonder what had happened to us.

We were released that day on bond and tried to return the next day with a moving truck, desperate to gather what we could and move out. We were arrested yet again. This time, the home was boarded up, with all our possessions and even our pets—a cat and a turtle—locked inside. It took more than a week of pressure and a call-in campaign by our friends and members of the housing advocacy group Communities United Against Foreclosure and Eviction to convince Invitation Homes to allow us into the house long enough to gather what we could and move out. By that time, our computer, camera and other valuables had gone missing. We never found our turtle.

We believe that Invitation Homes’ treatment of us was illegal: We were essentially evicted by the police at the company’s discretion. Letting this stand unchallenged could have far-reaching implications. With the help of local housing advocates and attorneys, we are filing a lawsuit against Invitation Homes for violations of Illinois’ eviction laws, as well as the Illinois Humane Care for Animals Act.

We were asked again and again: “Do you have anything to justify you living in this house?” Yes, in our opinion: We had fixed it up, made friends with the neighbors, put our money and our sweat equity into making the house breathe again. That’s more than the bank ever did.

Not everybody’s willing to fight, and that’s what powerful people are hoping for: that nobody fights, nobody organizes, they just leave when they’re told to.

We didn’t want to do that. We haven’t had a stable place to live since our eviction, but we’ve been using public records to track each purchase that Wall Street investors make in Chicago, trying to make sense of the next wave of displacement that’s headed our way and how to fight back.

Millions of People Can’t Pay Rent. Here’s How Some Are Organizing.