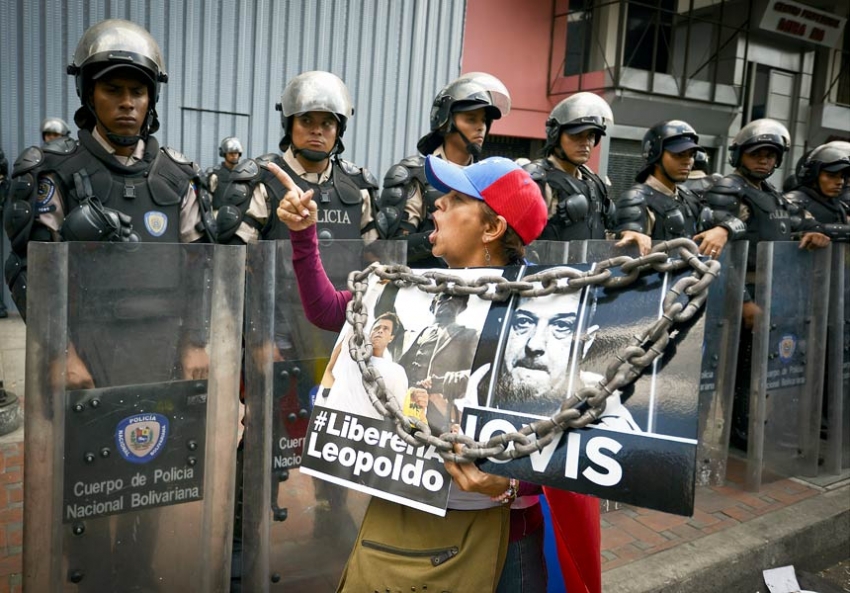 The KKK and Other Grassroots Movements

Venezuela isn’t as divided as its right-wing opposition would have you believe.

In the global context of right-wing movements brewing in the Ukraine, Venezuela and elsewhere—many of them using the same combination of social media savvy and boots on the ground that characterized the Arab Spring—progressives should be less concerned about how people are protesting and more concerned about who is mobilizing and what they’re fighting for.

Achy Obejas’ “Ending the Pain in Venezuela,” which ran in the April issue of In These Times, made an Obama-esque anguished call for civility in the protest-rocked country. Obejas rightly notes the untenability of the current situation. Inflation, food shortages and rising crime have fostered an opposition movement that is too strong to be vanquished by the narrow pro-government majority, but also too fractured to unseat President Nicolás Maduro’s administration. Her solution to the impasse is dialogue: sitting down both sides to agree to some sort of negotiated settlement.

But this high-mindedness is coming from a problematic place: a centrism unwilling to take sides in a battle between forces starkly polarized along class and ideological lines. Too many progressives reflexively honor any and all protests instead of critically evaluating their content. Today in Latin America, those radicals out of power and seething with resentment are often on the Right.

Among Venezuelan workers, still overwhelmingly supportive of the Bolivarian Revolution, the mood is less Obejas’ “we are all Venezuelans” and more “they will never come back.” They being such scions of privilege as Leopoldo López Mendoza, María Corina Machado, and Henrique Capriles Radonski, whose class had a stranglehold on the nation’s future until the rise of Hugo Chávez and the Bolivarian movement in the late 1990s, and who have been struggling ever since to regain their advantage.

The years of left-wing activity that followed were hardly without setbacks or failures, but they witnessed the politicization of many who were previously neglected. Though unevenly implemented, assembly councils and worker cooperatives were constructed, representing a depth of democratic participation rarely seen in human history. Materially, poverty fell by well over a third during Chávez’s tenure, and extreme poverty by 58 percent. Quality healthcare and education became accessible to ordinary people.

It should be of little surprise, then, to find that every block in Venezuela is not the scene of anti-state unrest. Even the New York Times headlined a piece, “Slum Dwellers in Caracas Ask, What Protests?” In working-class communities across Venezuela, the grassroots demonstrations thriving elsewhere provoke only fear that the social and economic gains of the last decade will be rolled back and the old neoliberal regime, along with its daily humiliations of poverty and powerlessness, restored.

Yes, grassroots. Among a certain type of progressive, “grassroots” is used to describe a platonic ideal. Some who both hold that view and want to defend the Venezuelan government are keen to portray the right-wing opposition movement’s protests as inauthentic: the work of CIA pawns or a media event manufactured in Miami studios.

But a recent look to U.S. history shows how much genuine popular activity can be mustered on the Right. The Christian Coalition in the 1980s had little corporate money to start with, nor did the insurgent campaigns of Barry Goldwater decades prior. And though depicted by some as “Astroturf,” the Tea Party Movement today boasts a base of energetic middle-class supporters. From school board elections to letter-writing campaigns, these people have a lot of time and a participatory spirit. Much the same for one of the largest community movements in American history—the Klu Klux Klan of the 1920s.

Which is to say, especially in the global context of right-wing movements brewing in the Ukraine, Venezuela and elsewhere—many of them using the same combination of social media savvy and boots on the ground that characterized the Arab Spring—progressives should be less concerned about how people are protesting and more concerned about who is mobilizing and what they’re fighting for.

The unrest in Venezuela may be impossible to ignore. Chavista elements have indeed supported concessions and a “government of national unity.” The best of them, however, view this as a tactical maneuver, halting the political and economic instability for long enough to allow the government to reconsolidate its position and rally its supporters.

But Obejas proposes not retreat, but surrender. And what she denounces is not just Chavista failings, but the fruits of their success.

A sign of a real revolution is its knack for conjuring a counter-revolution. To the extent that the Bolivarian Revolution has problems, the solution to them won’t come from chats with those looking to overthrow it, but rather the organization of workers trying to fulfill its potential. There can be no neutral ground between those two positions.