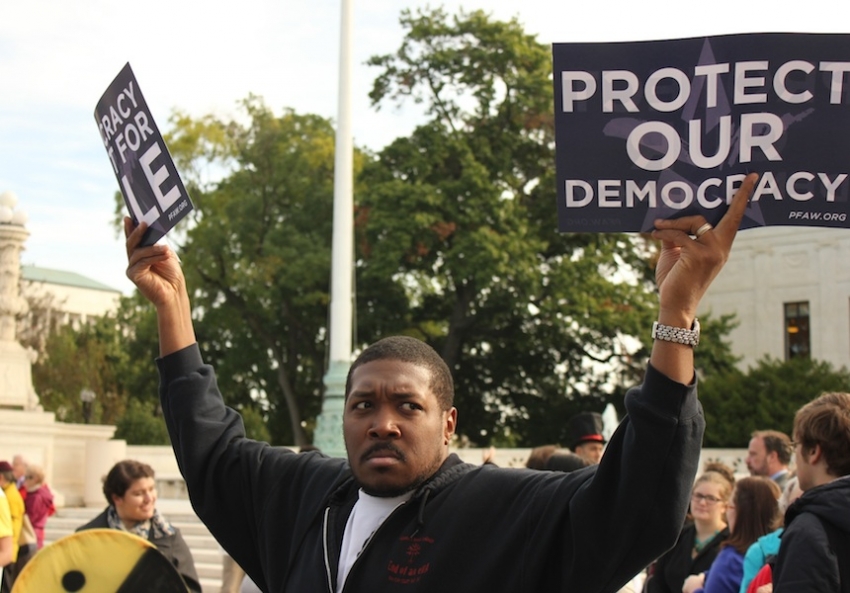 A protestor voices his displeasure with the McCutcheon ruling outside the Supreme Court last week. Photo by NickPrete / Flickr / Creative Commons

The McCutcheon Ruling Is Citizens United 2.0

The Supreme Court’s decision to remove caps on personal political campaign contributions will tighten the 1% stranglehold on American politics.

In earlier rulings on the issue of campaign finance, the Supreme Court acknowledged that money can corrode democracy, finding “an indisputable link” between big cash gifts and opportunities to speak directly to Congressmen and noting the threat that the money obliges officeholders to vote based on large donors’ demands rather than on the needs of constituents.

The billionaire-hugging right-wingers on the Supreme Court, who began poisoning the American political process in 2010 with their Citizens United decision, dumped a truckload more Zyklon B into voting booths last week with their McCutcheon ruling.

While in Citizens United they awarded corporations the right to secretly shower political groups with unlimited cash, in McCutcheon they enabled each billionaire to dump a total of $3.6 million on candidates and party organizations every two years instead of limiting themselves to the previous maximum of $123,000.

Squelching political corruption was the purpose of the campaign spending finance laws that the right-wing justices gutted. The spending limits shrank billionaires’ ability buy politicians.  The right-wingers on the court asserted that billionaires have a First Amendment right to spend as much as they want on politics. The court said that right supersedes the right of the non-rich majority to a democracy in which their elected representatives’ attention and positions can’t be purchased by a tiny wealthy minority.

Joe Six-Pack can’t compete for politicians’ time with Joe Six-Figure-Check. Just think about how quickly Scott Walker, the Republican governor of Wisconsin, jumped on the phone when he thought billionaire right-wing funder David Koch was on the other line. The caller actually was Ian Murphy, editor of online weekly the Buffalo Beast, punking Walker, who agreed during the taped conversation to accept a vacation trip, which was offered as a reward for the governor breaking the state’s unions.

Or, just think about the “Adelson primary” conducted last month by billionaire Sheldon Adelson, the world’s eighth-richest person, the guy who shelled out $150 million to influence elections in 2012. Joe Six-Pack knows better than to put out a big spread if he invites to lunch the front-runners for the Republican presidential nomination—say Ohio Gov. John Kasich, Wisconsin’s infamous Gov. Walker, New Jersey’s even more infamous Gov. Chris Bridgegate Christie, and Bush dynasty next-in-line Jeb. But when Sheldon sent them gilded invitations, they all flew right over.  Under investigation in two countries for possible corrupt practices, Sheldon has a lot to gain if he can buy himself a president.

The problem isn’t limited to Sheldon purchasing immunity or GE procuring tax breaks, enabling the nation’s largest corporation to force taxpayers to give it money instead of it paying taxes. The problem also is that the rich are different from the 99%.   That’s what three university professors found in a study of the political views and activities of the 1%. It’s called, “Democracy and the Policy Preferences of Wealthy Americans.”

Of the tiny percentage of Americans who are very rich, the researchers wrote:

We find that they are extremely active politically and that they are much more conservative than the American public as a whole with respect to important policies concerning taxation, economic regulation, and especially social welfare programs. Variation within this wealthy group suggests that the top one-tenth of 1 percent of wealth-holders (people with $40 million or more in net worth) may tend to hold still more conservative views that are even more distinct from those of the general public. We suggest that these distinctive policy preferences may help account for why certain public policies in the United States appear to deviate from what the majority of U.S. citizens wants the government to do. If this is so, it raises serious issues for democratic theory.

This difference explains why the vast majority of Americans cherish programs such as Social Security, Medicare, Medicaid and public education while wealthy right-wingers condemn them, calling them “collectivism” and government attempts to control citizens’ lives, as billionaire Charles G. Koch did in an op-ed in the Wall Street Journal last week. Koch, worth $40 billion, won’t ever need Social Security or Medicare or Medicaid or public education. No wonder he claims he’d have more liberty if a smaller government would kill off those programs and people would “help themselves” instead.

He has no idea what it feels like for the 43 percent of Americans who have less than $10,000 saved for retirement and depend on getting Social Security and Medicare to stave off a diet of cat food.

The wealthy, like Koch and Shaun McCutcheon, who along with the Republican National Committee sought to end the limit on aggregate campaign contributions, intend to use their money to buy a government that does their bidding. McCutcheon said his goal in spending more money on politics was to encourage enforcement of conservative principals, which are, as Koch said, small government and more freedom—that is, more freedom for the rich to kill Social Security and Medicare.

In earlier rulings on the issue of campaign finance, the Supreme Court acknowledged that money can corrode democracy, finding “an indisputable link” between big cash gifts and opportunities to speak directly to Congressmen and noting the threat that the money obliges officeholders to vote based on large donors’ demands rather than on the needs of constituents.

Chief Justice John Roberts, who wrote the right-wing majority opinion in the McCutcheon case, asserted that’s not corruption any more, writing: “government regulation may not target the general gratitude a candidate may feel toward those who support him or his allies, or the political access such support may afford.”

Roberts also insisted that only the First Amendment rights of one percenters may be considered, not any adverse effect on America’s democracy. “The whole point of the First Amendment is to protect individual speech,” he wrote, adding, “the degree to which speech is protected cannot turn on a legislative or judicial determination that particular speech is useful to the democratic process.” Congress may not, he said, limit campaign contributions in order level the playing field between wealthy donors and ordinary citizens.

The effect is to silence ordinary citizens, to deny them their First Amendment rights to speech because their pleas won’t be heard over the million dollar megaphones that the Supreme Court right-wingers have permitted billionaires to use.