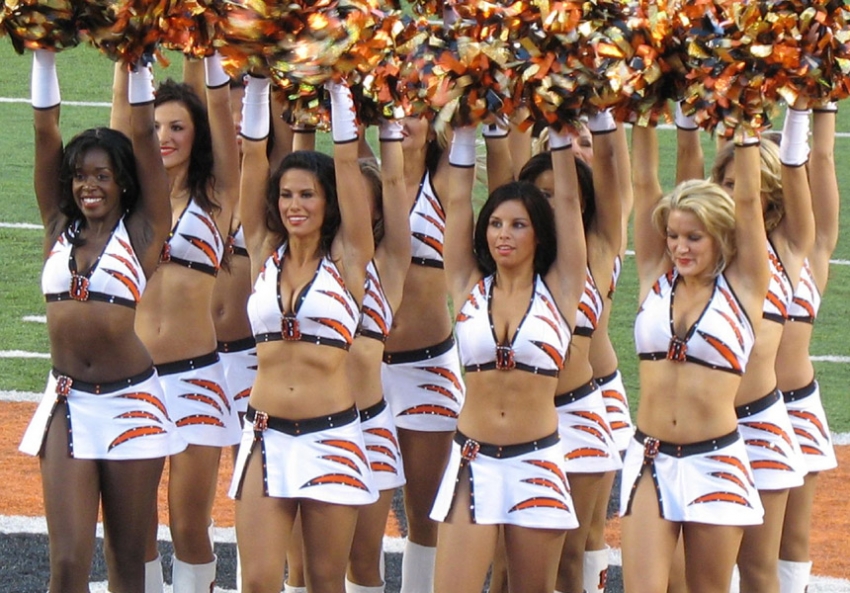 The Cincinnati 'Ben-gals' make about $2.85 an hour working for a team worth more than $900 million. (Team Spirit / Wikimedia Commons)

Members of some pro-football cheer squads make far less than the federal minimum wage, but their teams aren’t budging.

Some of our country's richest corporations have turned national wage laws into Swiss cheese, riddling them with special loopholes that let them escape paying even today's miserly minimum wage.

It doesn't take an IQ much higher than room temperature to realize that it's way past time to raise America's sub-poverty minimum wage of $7.25 an hour. But let's also pay attention to the millions of people trying to make ends meet on—believe it or not—America's sub-minimum wage.

Some of our country's richest corporations have turned national wage laws into Swiss cheese, riddling them with special loopholes that let them escape paying even today's miserly minimum wage. This amounts to wholesale daylight robbery of restaurant workers, farm workers, domestic workers, pro-football cheerleaders, taxi drivers, and … wait a minute … back up … cheerleaders?

The monster moneymaking machine known as the National Football League is continuing to run an off-field power play against its valuable and highly marketable female team players. Women on NFL teams? Yes—not running plays, but on the sidelines running the synchronized gymnastics and precision dance routines of professional cheerleaders. These women are an integral part of the spirit, entertainment, promotion and financial success of this $9 billion-a-year corporate enterprise.

Yes, super-rich NFL football teams, which sop up billions of dollars in subsidies from us taxpayers, pay peanuts to their highly publicized cheerleading squads. Widely assumed to be a glamour job, it's actually a poverty job that requires long hours of arduous practice, involves frequent travel (at their own expense) for media appearances and charity events, and subjects the women to abusive treatment by supervisors.

Members of the Oakland Raiders' squad calculate that their pay works out to less than $5 an hour, while the Cincinnati Bengals' cheerleaders (who bear the burden of being called “Ben-Gals”) are paid about $2.85 an hour—far less than the federal minimum wage—to be worked like mules, constantly abused, cheated and disrespected. Astonishingly, though, a recent ruling by the U.S. Labor Department says that this does not violate federal law. Why? Because the macho sports industry got its cheerleaders categorized as “seasonal amusement”—a loophole that exempts them from our national pay rules. Side note: NFL's mascots are considered “employees” of the teams they represent, worthy of a salary between $23,000 and $60,000 plus benefits.

Finally fed up, members of the Oakland Raiderettes cheerleading squad have sued their team's corporate hierarchy for gross labor violations. You'd think the billionaire owners of these sports kingdoms would be embarrassed to be publicly exposed as cheapskate exploiters of women. I mean, why wouldn't they just pay $10 an hour, or—what the hell—$100? That's pocket change to them.

Instead, the Oakland Raiders have rolled out their army of lawyers armed with a legalistic bomb called “mandatory arbitration.” The lawyers claim that, thanks to the sneaky arbitration proviso tucked into the ladies' employment contracts, the cheerleaders cannot go to court, but must submit any complaints to a private arbiter.

And who would that be? Why the NFL commissioner himself, whose $44-million-a-year salary is paid by the teams' owners! Why would he side with poverty-pay cheerleaders against the regal owners who feather his own nest? He won't, which is why these indefatigable women are not only challenging the NFL's abuse of them, but also the abuse we all suffer from the absurd corporate-rigged system of forced arbitration.

The Powers That Be are trying to transform our Land of Opportunity into their low-wage, plutocratic province. From farm workers to cheerleaders, we're all in this together—and it's time for us to get together to stop the plutocrats.

To keep up with the cheerleaders' case and see how they are standing up for us, go to levyvinick.com/blog/news.