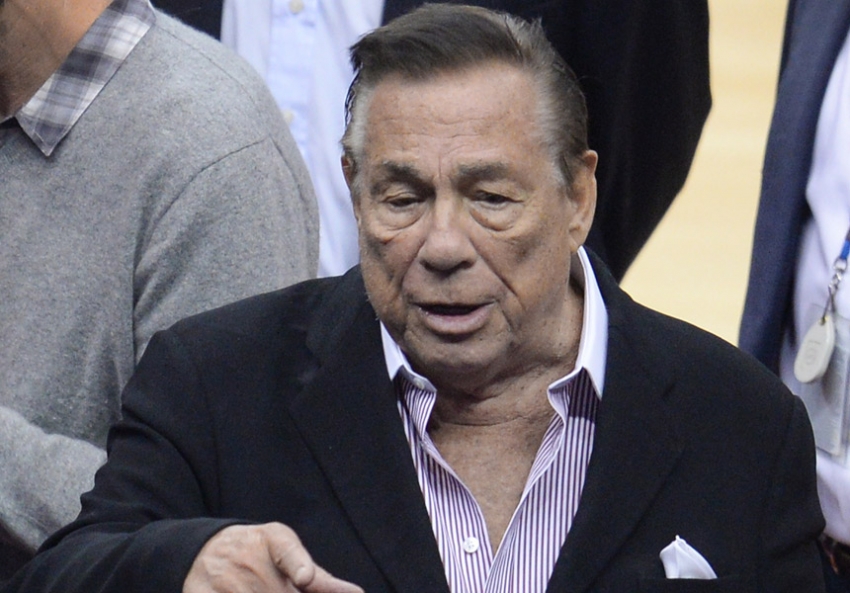 It's easy to take a stand against racists like L.A. Clippers owner Donald Sterling, whose bigotry was recently caught on tape. It's even easier to overlook the institutional racism embedded in our society. (Robyn Beck / Getty)

Donald Sterling Is Only Part of the Problem

When naked prejudice is displayed, therefore, it is treated as a kind of artifact from a distant and dark period in the nation’s history that inexplicably, as Obama put it, 'percolate[s] up every so often.'

On tapes released this week, Donald Sterling, a real estate mogul in Los Angeles and an owner of the LA Clippers, was caught berating his girlfriend for having Black friends. Sterling has been accused of racism for years, particularly after his 2009 settlement with the Department of Justice surrounding accusations of housing discrimination. But without the smoking gun of racial epithets on the record, the NBA simply ignored his history of bigotry.

When Sterling’s rant was leaked to the public, however, NBA officials and the sports media elite finally responded with shock and horror. On Tuesday, NBA Commissioner Adam Silver served Sterling with a lifetime ban and a $2.5 million fine, prompting many commentators to shower Silver with praise and gush about how the system had worked to exact justice.

Even before the NBA took official action, though, President Obama jumped into the fray. When asked about Sterling, Obama personally condemned his remarks as “incredibly offensive [and] racist.”

He went on to explain, “The United States continues to wrestle with the legacy of race and slavery and segregation … We've made enormous strides, but you're going to continue to see this percolate up every so often … And I think that we just have to be clear and steady in denouncing it, teaching our children differently, but also remaining hopeful that part of why statements like this stand out some much is because there has been this shift in how we view ourselves.”

Of course, Sterling’s statements should have been roundly criticized. It was telling, however, that Obama overcame his usual reluctance to talk about race when it came to the easy and obvious target of Sterling. By contrast, a few days prior, the president had ducked the more important matter of the U.S. Supreme Court’s approval of Michigan’s ban on affirmative action in college admissions.

Obama’s spokesperson, Jay Carney, said on his behalf that he “opposes quotas and thinks an emphasis on universal and not race-specific programs is good policy, considering race, along with other factors, can be appropriate in certain circumstances”—a comment that is mealy-mouthed at best considering the devastating implications of the Supreme Court’s decision for young students of color.

As the president demonstrated this week, it is easy to be verbose in response to racist Neanderthals who boorishly display the anachronistic hate that the Civil Rights Movement made publicly and politically unacceptable a generation ago. Unfortunately, it is even easier to ignore the more real and pernicious effects of persisting racial inequality, discrimination and segregation.

The absence of race in the law and the illegality of intentional acts of discrimination in private institutions have created the illusion that racism is almost extinct except in the minds of those who stubbornly resist progress in the United States. When naked prejudice is displayed, therefore, it is treated as a kind of artifact from a distant and dark period in the nation’s history that inexplicably, as Obama put it, “percolate[s] up every so often.'

Because of this, racism is generally only recognized in the public arena when it is intentional, outlandish and spectacular. In addition to the Sterling backlash, consider last year’s widespread fury in response to Paula Deen’s admission that she “used the N-word.” Even more recently, the nation united to castigate Cliven Bundy, a libertarian rancher who has been involved in an armed standoff with federal officials over the last month, making him a hero of the Republican Party and members of the National Rifle Association. This confrontation with the government has given him a platform to espouse a range of his ideas. At a recent press conference, he proclaimed:

I want to tell you one more thing I know about the Negro … They abort their young children, they put their young men in jail, because they never learned how to pick cotton. And I’ve often wondered, are they better off as slaves, picking cotton and having a family life and doing things, or are they better off under government subsidy? They didn’t get no more freedom. They got less freedom.

In a matter of a few sentences, Bundy had gone from right-wing lionheart to out-of-touch bigot.

Again, Bundy, Deen and Sterling deserve the acrimony provoked by their hate speech. But some of the public outrage coming from the political elite and the mainstream media seems akin to the shedding of crocodile tears. Days before Bundy made his incendiary comments, after all, Republicans were falling over themselves to get in Bundy’s good graces and to praise his extremist libertarian views. But the minute Bundy gave voice to the same racism that underlies many GOP narratives—such as scaremongering over “welfare queens” and “illegal aliens” —he became a pariah. For example, a spokesperson for Bundy’s former supporter Sen. Dean Heller (R-Nev.) was quick to condemn him “in the most strenuous way,” for making “appalling and racist statements;” Rand Paul assured reporters that he “wholeheartedly disagreed with [Bundy].”

Elected officials and representatives of the federal government frequently claim that the United States is race-neutral, or at least a society striving towards “colorblindness”. Chief Justice John Roberts himself spoke to this assumption when he infamously expressed his 2007 opposition to school integration programs by stating, “The way to stop discrimination on the basis of race is to stop discriminating on the basis of race.”

In other words, according to Roberts and his ilk, ignoring race is the only remedy for the harmful American disparities between Black and white life driven by decades of segregation, biased discriminatory policy and private practices—no matter that without real, honest action, these disparities will continue to be the status quo.

This racial calculus has left the U.S. public bereft of a language to explain the vast socioeconomic imbalance that persists in our society. Instead, African Americans and Latinos are often held responsible for the conditions of inequality that exists in their racially segregated communities.

Last March, for instance, Wisconsin Republican Paul Ryan attributed high levels of urban unemployment to the cultural “tailspin” of “inner city men … not even thinking about working”: coded language putting the blame for years of discrimination on the shoulders of people of color. Similarly, in the recent shuttering of dozens of Chicago schools, city officials rarely voiced the fact that the so-called “underutilized” institutions largely served Black and Brown children who would, in turn, be left with fewer chances to succeed.

Meanwhile, the humiliating and quotidian effects of institutional racism—the disproportionate rates of poverty, unemployment, foreclosures, evictions, student loans, imprisonment and beyond that afflict Black communities and distort Black life chances—largely go unnoticed and without comment from those in power or the general public.

The anger directed at Bundy, Sterling, and the like is well warranted; in Sterling’s case, his relative pittance of a fine is nowhere near enough punishment. But their arrogant displays of animosity are not the exception in an otherwise harmonious society. Racism should not be reduced to the ignorant outbursts of social misfits. There should be as much rage directed at housing discrimination, school closures and the other, more tangible effects of racism in the United States today as there is toward those who allow their bigotry to be caught on tape.