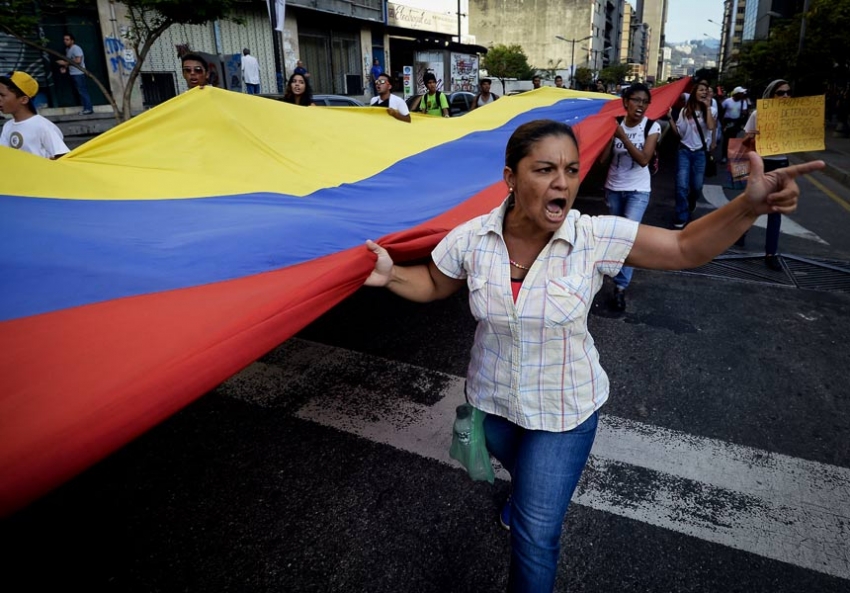 Amidst turmoil, President Maduro meets with opposition leaders. But will it help?

Part of the danger lies in Maduro’s own bumbling when speaking off the cuff: He recently mispronounced peces (fish) as penes (penises) and claimed that Hugo Chávez’s spirit talks to him through birds.

How divided is Venezula? President Nicolás Maduro appears to believe that it’s divided enough to risk sitting down for negotiations with his opposition.

The talks, televised and uncensored, include representatives from Brazil, Colombia, Ecuador and the Vatican as observers and facilitators. The meetings were Maduro’s idea—after being prodded by regional leaders, including some of his most loyal supporters. But in many ways they pose a greater peril for him than for Henrique Capriles Radonski, the opposition leader he beat in the last presidential contest, who is heading up the other side.

Part of the danger lies in Maduro’s own bumbling when speaking off the cuff: He recently mispronounced peces (fish) as penes (penises) and claimed that Hugo Chávez’s spirit talks to him through birds.

Moreover, the talks—which Maduro has said are about quelling the violence that has wracked Venezuela since mid-February—don’t actually include the intellectual authors of the street protests. This includes students (who demonstrated again after the initial talks, leading to more violence) and opposition leaders such as Leopoldo López and María Corina Machado, who was deposed from her seat in the legislature after speaking against the Maduro government to the Organization of American States. All of which means there’s little chance the people Maduro chose to talk to can actually influence events the way he wants. And continued protests hurt Maduro more than the opposition because they suggest the government isn’t in control.

Still, though the talks themselves were tense—Maduro was snide, Capriles was condescending—and mostly rehashed both sides’ positions, they managed to agree on two things, at least in principle: first, to keep talking. And, second, to establish a “truth commission” to investigate the 41 deaths and dozens of abuse complaints resulting from the protests. They haven’t figured out who’s on the commission, but Maduro walked away saying the first talks were “excellent,” and Capriles at least nodded.

For Maduro, and to some extent for Capriles, too, the greatest risks don’t lie in these initial dealings, which, perhaps inevitably, have more to do with the rules and parameters of how to continue talking. The question is, what will they talk about after they figure out how to talk?

There’s no lack of subjects. Critically, Venezuela’s economy is in disarray, which threatens the very programs the Chavistas are trying to protect. According to Venezuela’s own Central Bank, inflation is at 57.3 percent as of February, among the highest in the world. And according to the World Bank, Venezuela’s economy grew only 7 percent in 2013, the lowest growth rate in Latin America.

Maduro and Capriles have very different visions of what’s happening and how to fix it, but not even Maduro is pretending everything is A-OK. Last fall, he talked openly about the urgent need to increase the country’s productivity.

Which brings us back to their recent meetings: An invitation to talk and its acceptance presumes a willingness to make concessions. What can Maduro give away that will be meaningful to the opposition and not undermine his credibility? What promises can Capriles actually deliver upon? Can either man afford to walk away without some measurable steps toward reconciliation?

This being a divided Venezuela, there was plenty of dissent about the talks themselves. National Assembly leader Diosdado Cabello accused the opposition reps of being the same people who had tried to oust Hugo Chávez in a 2002 coup, while Machado called the meetings a “farce.”

News of the talks has overshadowed a particularly ominous incident in late March: the arrests of three unnamed Venezuelan air force generals accused by Maduro of plotting a coup. It doesn’t take a genius to figure out that, 15 years into the Bolivarian Revolution, every general in Venezuela’s armed forces has Chávez’s imprimatur. In other words, if what Maduro says is true, then three men Chávez trusted at the highest levels of the military turned on his successor.

And given the history of coups in Latin America and in Venezuela (three since 1945), that’s got to be more unsettling to Maduro than anything Capriles has to say. A coup from within the Bolivarian military would be a devastating blow.