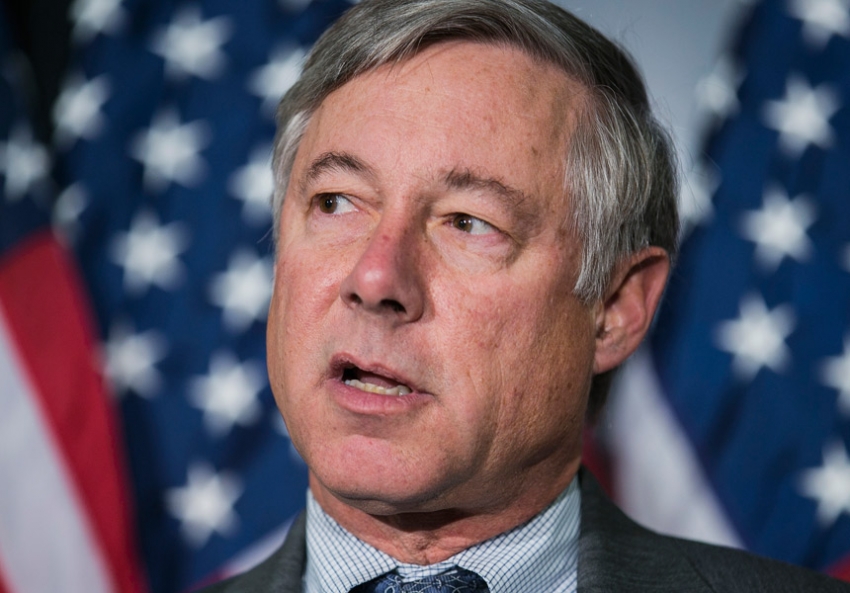 On April 30, the GOP House Committee on Energy and Commerce, chaired by Fred Upton (R-Mich.), gleefully issued a press release that jumped to deceitful conclusions about Obamacare. (T.J. Kirkpatrick / Getty)

Republicans have distorted facts to fuel their assault on a favorite target.

Republicans have tried to break up Obamacare and America by voting to repeal the law more than 50 times.

The GOP wants America to divorce Obamacare so badly that Republicans are willing to stoop to the tactics of prototypical evil mothers-in-law—nitpicking, backbiting and straight-up lying.

Just last week, Republicans got caught in a lie about Obamacare very publicly—at their own hearing on Obamacare. As failed GOP presidential wannabe Rick Perry would say, “Oops.”

The “oops” moment was bookended by publication last week of two reports showing the popularity and effectiveness of Obamacare. To GOP dismay, their “oops” hearing ended up revealing a positive statistic about Obamacare—Americans are so eager to get the coverage that a high percentage paid their premiums. Republicans are right that Americans don’t like Obamacare—the name Obamacare, that is. When they judge it for the content of its insurance, they love it.

Like a spiteful mother-in-law who thinks she’s got proof that her daughter’s new husband is cheating, the GOP was gleeful April 30 when it announced it had determined that a third of Americans who signed up for insurance through the Obamacare exchanges hadn’t paid their first premiums. Republicans reveled in the opportunity to say, “I told you so.” They disregarded the downside, which would be millions of Americans without health insurance.

The Republican-controlled House Committee on Energy and Commerce issued a press release contending that only 67 percent of those who enrolled in the federal marketplace for insurance had paid their first month’s premium by April 15. And, the committee triumphantly added, it would conduct a hearing on the matter on May 7 because that would give the committee a second opportunity to gloat over the figures.

On May 7, executives from the country’s largest insurers—Aetna, WellPoint and Health Care Service Corp.—testified that the GOP had jumped to deceitful conclusions about Obamacare premium payment rates. The executive from Health Care Service, which operates Blue Cross Blue Shield plans, said that by the time of the hearing 83 percent of those who signed up with his company had paid the first premium. The guy from WellPoint said his number was higher—90 percent.

Here’s what happened: The GOP-controlled committee asked insurers to report the percentage of enrollees who had paid premiums by April 15.

The trouble is that April 15 was not the deadline for all enrollees to make their first payment. Nearly 1 million had additional time. At least two insurance executives testified that they warned the committee when they submitted the figures that they were incomplete.

The Republicans chose to ignore that. Why wait for complete numbers and risk them showing that Obamacare premium payments were better than expected? Which, as it turned out, is what happened.

The high payment rate reinforces Democratic assertions that Americans love the contents of Obamacare, including its provisions outlawing the insurance company practices of dropping clients when they got sick and refusing coverage to those with pre-existing conditions.

Also reinforcing the assertion that Americans love the contents of Obamacare is the high participation rate. More than 8 million people enrolled, a million more than expected. This year’s fines for not getting health insurance, as little as $95, were too paltry to compel participation. The 8 million wanted the coverage, and the peace of mind that comes with it.

Another 7 million people got coverage through expansion of Medicaid to more low-income people and extension of coverage to young adults under their parents’ plans. Americans tell pollster after pollster how much they adore these provisions.

And insurance does prevent death. In another study released last week, researchers found that the mortality rate in Massachusetts declined by 3 percent in the four years after the launch of Romneycare—the health insurance law on which Obamacare was based. The mortality rate, which is deaths per 100,000 people, decreased most significantly in Massachusetts counties that had the highest rates of poverty and people without insurance before the law took effect.

The researchers compared outcomes for 4 million people aged 20 to 64 in Massachusetts to 44 million people in counties with comparable demographics, insurance and poverty levels across the country. There was no change in mortality rate in the control populations.

A 3 percent decline in mortality among the same age group nationwide would mean 17,000 fewer deaths each year. Knowing that Obamacare spared the life of a spouse or parent or child—now that’s something Americans love.

Still, Republicans are bent on separating Americans from their Obamacare. U.S. Rep. Eric Cantor, the GOP majority leader in the House, has promised a vote later this year on an alternative to Obamacare. Maybe they’ll call it Cantorcare. So far though, they’ve got nothing to call anything.

Republicans have tried to break up Obamacare and America by voting to repeal the law more than 50 times. All that balloting failed to result in an actual reversal, and in all this time, Republicans still have produced no alternative health insurance plan.

Americans have said repeatedly they don’t want Obamacare repealed. If anything, they want it improved. But Republicans, divorced from reality, refuse to believe that.