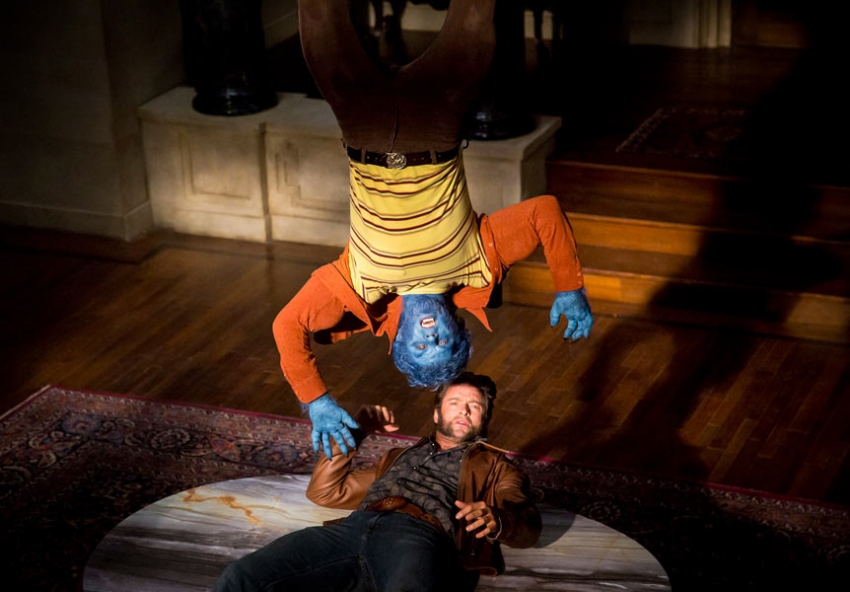 Use Your Words, Wolverine

The bad lessons of superhero movies.

Generally, superheroes appear to be a device with which adolescent frustration and the untamped adult urge to bomb, bash and beat down are not only given expression, but made supreme in our collective headspace.

If you’re old enough to remember when an R-rated movie for adults, like, say Stanley Kubrick’s Full Metal Jacket (1987), could get a wide release in midsummer, then you hardly need a reason beyond your own maturity to be disgruntled about American movies this time of year. Who would’ve thought, even in the Reagan era of blockbusterdom, that our native movie culture would be overwhelmingly enraptured by superheroes? They’re for kids, right?

Well, yes—except that the tweens and teens buying tickets when the current wave began, with X-Men (2000) and Spider-Man (2002), are now adults, and superhero flicks are the new grown-up normal. With some 45 entries since 2000, the subgenre has earned nearly $10 billion at home and more than $21 billion in international theaters, not to mention the home-viewing revenue, which can be five or six times higher. Like it or not, 21st-century America can be designated by its worship of and empathy with Iron Man, Spider-Man, Superman and Captain America, just as ancient Greece can be characterized by its passion for Perseus or 19th-to-20th-century Germany can be seen as a society idly in love with Winnetou.

Relax, we’re told, it’s just escapism—except, for most consumers, escape is the only culture they know. Superhero cinema in particular infantilizes ideas of social conflict, drama, heroism, moral choice and even violence, and does so because it has one narrative thrust: the reduction of all conflict and dramatic tension to fighting. Any problem posed to mankind, Metropolis or America must be solved by mano a mano brawling. Whether the hero and archvillain are punching each other through buildings or inflicting super-powered carnage on airliners, the dramaturgical upshot is always the same: Nothing goes on that wouldn’t happen in a playground spat or a late-night fistfight between drunks, and the outcomes are always predictable.

How and why does this simplistic spectacle—coming after a century of Hollywood movies reveling in all varieties of moral dilemmas, emotional crises and inventive climaxes—seem to satisfy so many viewers? If you’re among those who remain unsatisfied by a 30-minute-long punching battle between two digital figures in unicolor leotards, then you may see the ineffectual mayhem as a kind of coded militarism, all-American and packaged like a Happy Meal. Whether it’s in the form of desperate vigilantism (the lonesome Spider-Man and Batman) or of institutional jingoism (the corporate-military Iron Man, the martially official Captain America), it’s all about boiling dilemmas down to Might Is Right—and American exceptionalism.

It’s no coincidence that this pop entertainment phenomenon emerged and thrived in the years of Bush II, and continues under Obama in the haze of distended military involvements in Asia, matter-of-fact executive drone assassinations, and the rapid dissipation of American supremacy on every front. Americans crave fist-in-the-face power, and if we can’t get it in a global situation swiftly spiraling out from under our boot, then we’ll settle for fantasy muscle men pounding the evildoers into dust.

True, the X-Men series, being a thinly masked parable about the difference and oppression of gays, has a consistent anti-military personality—but its most popular protagonist, Wolverine, is defined precisely as being invincible in a one-on-one death match. Generally, superheroes appear to be a device with which adolescent frustration and the untamped adult urge to bomb, bash and beat down are not only given expression, but made supreme in our collective headspace. These movies are one way that our over-entertained culture heroizes its own worst impulses—if in fact the subgenre isn’t an example of Antonio Gramsci’s cultural hegemony, a manipulation of norms and values by the corporate class in order to maintain the militaristic weltanschauung that makes so many economic sectors so much money. Shun these movies, dear progressive reader, as you would shun a gun or an episode of The Ultimate Fighter. There are other stories to tell, other narrative forms to stir, exalt and move us, that do not reduce us to spectators at a fistfight. This summer, stay home and wait for better.