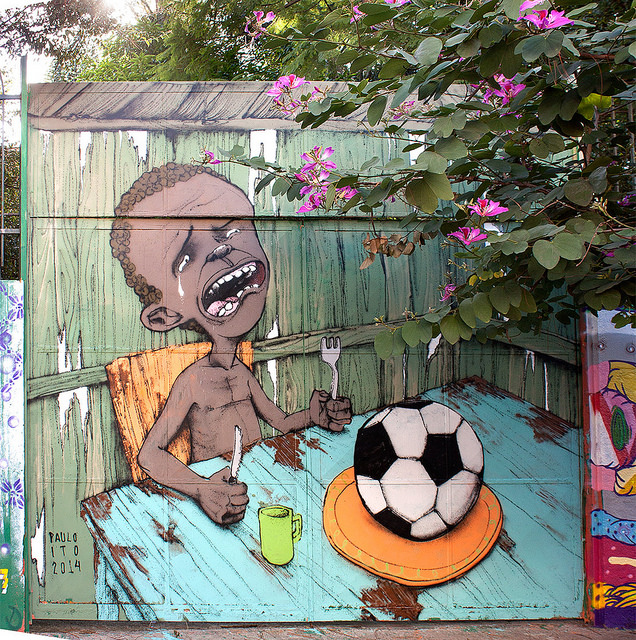 Why Brazil’s World Cup Protesters Are So Furious

Four devastating effects of La Copa that will be felt long after the games.

In the efforts to build a “FIFA-quality stadium” in the middle of the Amazon rainforest, Brazil spent $295 million, about 25 percent more than the original estimates, while uprooting acres of the most ecologically delicate region on the planet.

Excerpted from Dave Zirin’s Brazil’s Dance With the Devil: The World Cup, The Olympics and the Fight for Democracy (May 2014, Haymarket Books).

When Brazil won its bid to host the 2016 Olympics, the country was heralded as a capitalist success story, with the Financial Times, the Wall Street Journal, and other organs of the 1% engorged over a nation whose stock market, Bovespa, had grown at a rate of 523 percent over the previous decade. For so many in Brazil, this was long overdue. Hosting these sporting events was about international recognition that Brazil’s day had come.

Yet those heady days seem like several lifetimes ago; Brazil, whose 7.5-percent growth rate—even in the wake of the 2008 Great Recession—had made The Economist swoon, saw its economy sputter in 2012 toward a growth rate of just 0.9 percent.

Despite the near-absence of economic expansion, spending on stadiums and infrastructure projects intended for the 2016 Olympics in Rio and for the 2014 World Cup in 12 cities across the nation has not skipped a beat. The facts on the ground in Brazil have changed, yet, ravenous and remorseless, the World Cup and Olympic golems continue to feed.

When I was in Brazil, I spoke with workers who were deeply concerned about the rush to build 12 new “FIFA-quality” World Cup stadiums. Their concern did not stem only from the fact that this country already has no shortage of well-equipped fields. They were also concerned about the round-the-clock hours, the exhaustion of those operating heavy machinery, and the unsafe working conditions. Then, in November 2013, a crane collapsed into Arena Corinthians (Corinthians Stadium) in São Paulo, sending an avalanche of newly cemented concrete to the earth below. This tragedy, which took the lives of two men, Fabio Luiz Pereira and Ronaldo Oliveira dos Santos, could have been far worse. One of their coworkers, José Mario da Silva, said, “I walked right underneath the crane on the way to lunch. If it hadn’t collapsed at lunchtime, a lot more people would have died.”

Sepp Blatter, the reptilian chief of FIFA, said that he was “deeply saddened” by the deaths, and FIFA issued its own statement that the “safety of workers is a top priority.” It is worth noting that Blatter voiced these comments just as FIFA faced international scrutiny about revelations of slave labor and multiple deaths during stadium constructions in Qatar, where the 2022 World Cup will take place. Weeks after the accident, we also learned that the crane operator had been working for 18 straight days, just another cog in Brazil’s 24/7 sprint to complete stadium construction. Brazil’s sports minister, Aldo Rebelo, said nothing after the tragedy about confronting fatigue or labor abuses on work sites. Instead, he assured the media that “the stadiums shall be built on time.” As for the dead, Rebelo sent a tweet expressing “solidarity with the families of the victims.” The only true solidarity that the government has shown, however, has been with FIFA—to get the stadiums done, no matter the cost.

Brazilians are outraged that services like transportation, education, and healthcare are inefficiently run or woefully underfunded, yet spending for the World Cup alone reached the 11-billion-dollar mark. In Rio, the legendary Maracanã Stadium has received a five-hundred-million-dollar facelift, with construction crews working around the clock to make the site of the 1950 World Cup final a twenty-first-century, “FIFA-quality” stadium. The construction companies, which are the largest political donors in the country, want to see this happen by any means necessary. Security firms have been hired to keep unsightly poverty out of view of the coming international audience. This means that new high-rises are going up, new high-tech security systems are being installed, new roads are being paved, and dozens of favelas have been demolished because they were built in areas deemed “high-risk” or “designated for public use.” Evicting people from spaces “designated for public use” is particularly ironic when you consider that razing a favela will eventually lead to the private development and ownership of highly valued hillside real estate.

This process is more than immoral: It is actually unconstitutional. Brazil has some of the toughest squatters’ rights laws in the world. Anyone who built a house more than five years ago is supposed to be protected, according to both the Brazilian Constitution and local legislation, known as the Organic Municipal Law. If a resident accepts compensation, then, at least in theory, it is supposed to allow them to get comparable housing of at least equal value elsewhere. But that is not what is happening. As one Rio housing activist, João, said to me,

Money is handed to you and you take it or leave it. People have to live in the favelas because of the proximity to wealth. They need to be close to where their jobs are and they cannot afford transportation. For the wealthy, it’s like your Mexican immigrants in the United States: they hate the favelas but they need the individuals in the favelas to do all the work they do not want to do. The time they are serving the rich people, they are good; the time they are living nearby, they are bad and it’s the same people.

The environment is an extremely sensitive subject in Brazil, home to the “lungs of the earth.” The World Cup—which is a national operation, as opposed to the Rio-centric Olympics—means greater stress on this critical ecosystem. This can be seen most sharply in the efforts to build a “FIFA-quality stadium” in the middle of the Amazon rainforest. Brazil spent $295 million, about 25 percent more than the original estimates, while uprooting acres of the most ecologically delicate region on the planet.

The government is looking for options for the stadium after the World Cup that seem fiscally sound. One idea being floated is to turn the entire stadium into a massive open-air prison—a use with a notoriously bloody echo in Latin American history, one not lost on those protesting the priorities of both FIFA and the Brazilian government.

Then there is the question of security, a word that means different things to different people. When the planners of the World Cup and the Olympics discuss security, they are speaking about the security of the wealthy to travel to Brazil and feel as safe as they would in a gated community.

At a cost of $900 million, the 12 World Cup host cities will be equipped with surveillance and integrated command centers staffed with police and military personnel, in addition to two large security centers in Rio and Brasília that will monitor security nationwide. More than a thousand surveillance cameras will be installed in Rio de Janeiro alone.

The police will be under the command of the military, an idea that last had currency during the dictatorship.

Drone surveillance planes will be flying over Rio, as they did for the Olympics in London.

The security plan also includes creating “exclusion zones” around the stadiums, guarded by 1,400 armed troops, as well as “World Cup courts” aimed at fast-tracking judicial proceedings to charge, prosecute, and convict crimes ranging from robberies and assault to “ambush marketing in contravention of FIFA’s regulations.”

Older Brazilians see in this new security regime a jarring echo of the days of military dictatorship, yet with one critical difference. This time, instead of crushing revolutionary movements, the authorities are focusing their repression on squelching spontaneous rage at the priorities of commerce and on making sure the trains—and planes—run on time.

Yet no matter the stated goals of World Cup security, the major concern is that the security protocols will remain even after the party ends and everyone has gone home. There are no external military threats against Brazil, and a standing, aggressive military and national police command structure can really only be aimed in one direction: inward.

Seizing land and homes, running roughshod over the rights of those of African and Indigenous descent, opening the doors for foreign plunder, the buzzsaw development of the Amazon, exporting Brazil’s culture, declaring an end to public space, militarizing the cities: all of these can be facilitated through laws described as “states of exception,” like those historically passed for the Olympic Games in which the usual rules (and constitutions) no longer apply. This is why mayors like Michael Bloomberg in New York City and Richard Daley in Chicago—both cities pinnacles of gentrification—wanted the Olympics so desperately and why Lula fought so hard for them at the end of his presidency. In a rush of excitement, the land grab and the privatization of public space could proceed with abandon.

Dave Zirin is The Nation’s sports correspondent and the author, most recently, of Brazil's Dance with the Devil: The World Cup, the Olympics, and the Fight for Democracy (Haymarket Books). Named one of UTNE Reader’s “50 Visionaries Who Are Changing Our World,” Zirin is a frequent guest on MSNBC, ESPN and Democracy Now! He also hosts his own weekly Sirius XM show, Edge of Sports Radio. His other books include Game Over: How Politics Has Turned the Sports World Upside Down (The New Press), What's My Name Fool? (Haymarket Books), A People's History of Sports in the United States (the New Press), Bad Sports: How Owners Are Ruining the Games We Love (Scribner) and, with John Wesley Carlos, The John Carlos Story. You can find all his work at www.edgeofsports.com.

A Primer on Disaster Capitalism, Our New Normal