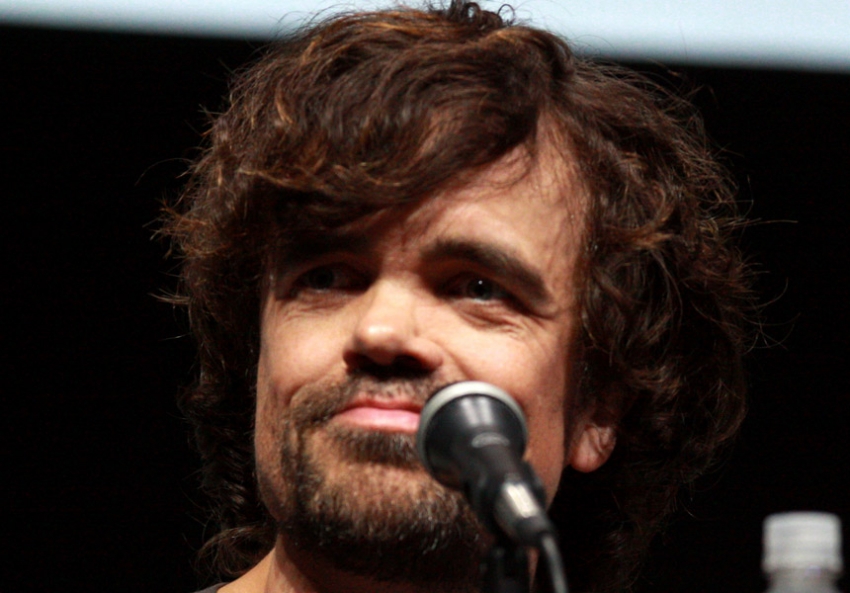 Tyrion Lannister (played by Peter Dinklage, pictured here) may be a sympathetic character, but that doesn't excuse his abuse of women. (Gage Skidmore / Wikimedia Commons)

In its season finale, the show once again asks us to sympathize with a male perpetrator of violence rather than his female victim.

But, whether you blame the TV adaptation or the original text, the problem with Game of Thrones’ sexualized violence isn’t just the fact that it exists, or even that there’s lots of it. It’s the fact that the story itself often works to rationalize or justify that violence.

On Sunday night, Game of Thrones viewers tuned in to watch a man strangle his ex-girlfriend to death for hurting his feelings. The man in question is Tyrion Lannister (Peter Dinklage), one of the few characters the show has ever encouraged us to side with unambiguously; the woman was Shae (Sibel Kekilli), a prostitute he’d hired on an exclusive basis back in the series’ first season. There has been plenty of heated coverage of the scene—including exclusive interviews with the actors, showrunners and A Song of Ice and Fire author George R. R. Martin, who originally wrote the twist—focusing on Tyrion’s motivations and what this means for his character going forward.

But, in all of that, no one seems willing to call the scene what it is: an act of partner abuse. And that’s due to some very tricky—and very dangerous —narrative work on behalf of the showrunners and George R. R. Martin. As viewers, we’re not only asked to rationalize Tyrion’s choice to physically harm his partner; we’re asked to believe that he did it out of “love.”

In the context of the show, Shae’s death is neither especially violent nor especially shocking. This is a series that delights in killing off major characters, after all, and the manner of her death can’t stand out as particularly gory on a show where we’ve seen people flayed, castrated and burned alive. (One major action scene this season featured a man popping his opponent’s skull like a watermelon at a Gallagher show. After that, choking someone to death seems downright polite.) Even so, the gender politics of the scene stand out as particularly nasty upon close examination, and the fact that most reviews have failed to note them says something even nastier about the effect Game of Thrones has on its audience’s sympathies.

The show has already come under fire for its sexism this year, especially in regard to a now-notorious rape scene, where the wicked queen Cersei Lannister (Lena Headey) is raped by her supposedly good-hearted brother-slash-lover Jaime (Nickolaj Coster-Waldau). Some were quick to condemn the show for departing from the books; Sonia Saraiya noted that the show had an established tendency to introduce scenes of violence against women where they weren't present in the original text.

Other critics, myself included, have pointed out that Game of Thrones’ tendency to use violence against women for cheap shock value is omnipresent throughout both the show and George R.R. Martin’s original writing. For example, while some fans argued that the TV series’ unambiguous rape scene between queen-in-exile Daenerys (Emilia Clarke) and the now-deceased Khal Drogo (Jason Momoa), began as an ambiguously “consensual” encounter between the two characters in the books, others maintained that it simply condensed the book's existing timeline, where, after a “consensual” wedding night (if you can ever call a sex scene between a little girl and the adult man to whom she’s been sold “consensual,” which, for the record, you cannot) Drogo begins routinely raping Daenerys until she somehow hones her sexual prowess to such an extent that he begins treating her nicely. Not only is the message of this plot line spectacularly retrograde in both versions—ladies! If you want your spouse to stop abusing you, just get really really good at giving him orgasms!—it’s arguably less offensive in the TV version. After all, in the show, Daenerys is played by an adult actress, and we’re not forced (as we are in the books) to confront the fact that an adult man chose to write with palpable, leering eroticism about the “stiffened,” “aching” nipples and copious vaginal “wetness” of a 13-year-old child.

But whether you blame the TV adaptation or the original text, the problem with Game of Thrones’ sexualized violence isn’t just the fact that it exists, or even that there’s lots of it. It’s the fact that the story itself often works to rationalize or justify that violence. Daenerys’ rape itself isn’t inherently problematic; however, a narrative about marital rape that blossoms into true love is a huge problem, because it inherently justifies the abuse of women and girls. Similarly, the issue with Shae’s death isn’t simply that she dies; it’s the message sent by her murder.

In some senses, the scene is presented as a tit-for-tat revenge killing. Shae has spent most of the show working as Tyrion’s personal prostitute. After Tyrion fires her, Shae gives false testimony against him at a rigged trial intended to convict him of the murder of his nephew, King Joffrey (Jack Gleeson). Finally, when Tyrion escapes from prison, he discovers that Shae has been sleeping with his father, Tywin Lannister (Charles Dance), who was responsible for rigging the trial. We’re encouraged to believe that Shae gave her testimony out of vindictiveness, and even that she’d be willing to murder Tyrion: When he catches her in Tywin’s bedroom, she picks up a knife (a detail not included in the books) which many viewers took to mean that he was acting in self-defense. Shae “betrays” Tyrion; Shae allies with Tyrion’s enemies; Shae threatens Tyrion’s life, both with her testimony and with the knife. Therefore, Shae has to die. Simple, right?

Well, no. The more you look at that line of reasoning, the less sense it makes. To start with, Shae wasn’t Tyrion’s girlfriend; she was his employee. She started having sex with him when he started paying her, and she stopped when he stopped. The show suggests genuine affection developing on Shae's part, but the fact is, seeming affectionate to Tyrion was part of Shae's job, and money never stopped changing hands. To suggest that Tyrion is entitled to any sort of continuing loyalty from Shae is a fundamental misunderstanding of the sex worker/client relationship. For that matter, judging Shae for having sex with Tyrion’s enemy when her job is to have sex with people is also nonsensical; it’s the equivalent of saying that a laid-off worker is a bad person for taking another job with a competing company. And finally, there’s the fact that Shae was taken captive by Tywin prior to the trial, and would most likely have been tortured or executed if she refused to provide sex, testimony against Tyrion or both. Essentially, this is a character who gets killed for the crime of not getting herself killed.

And if the show seemed willing to grapple with the complexities of that arc—if it had, for example, focused its storytelling on Shae’s life as a marginalized woman and the coercion she often endured—I might actually commend it. Even if the writers had presented her death as the inevitable result of societal misogyny and Tyrion’s personal feelings of entitlement to women’s bodies and their sympathy, they might have been making a praiseworthy point. But this is simply not the case. The story of the trial, and their relationship, remains entirely centered on Tyrion’s emotions. Ultimately, Shae’s death serves no narrative function but to underline the message that we ought to pity her murderer: She’s presented as a vindictive ex rather than a victim—one more instance of how the world is unfair to poor old Tyrion Lannister. A quick Twitter search pulls up dozens of comments like “She actually was a faithless whore,” “I’m so disappointed with Shae,” and “fuck that bitch,” confirming that the show’s efforts to confer viewer sympathies away from the victim and onto her killer are working for many.

Then, to add insult to injury, we’re expected to believe that he loves her. He’s shown weeping as he strangles her to death; he says “I’m sorry” to her corpse. In the very next scene, Tyrion confronts his father, gives a moving soliloquy about his love for Shae and promptly shoots Tywin to death with a crossbow for referring to her as a “whore.” It’s framed as a heroic act, a defense of Shae’s honor and value as a human being—which is to say, we’re asked to applaud a man for “defending” a woman he just beat and strangled to death in her bed for not liking him enough. Not only is this ludicrous, it renders Shae’s death purely gratuitous: She seems to have died solely to provide the emotional impetus for another, more narratively significant murder.

None of this is irrelevant. Women are killed by their partners or former partners at an alarming rate—40 percent of all female murder victims worldwide, in fact, are killed by the men they date or used to date. Even more are physically battered by them. These are the excuses we hear: That it was a crime of passion, that she brought it on herself, that she hurt him too, that he just couldn’t help himself. That he’s “sorry.” That he loved her. In Game of Thrones, the narrative works to make these excuses for Tyrion. By doing so, it actively contributes to the culture of abuse women have to live in—or die in.

Far too frequently, Game of Thrones asks us to excuse the men who perpetrate violence against women: To believe that Jaime “loves” Cersei though he raped her, that Drogo “loved” Daenerys though he raped her repeatedly, that Tyrion “loved” Shae in spite of his evident belief that she didn’t deserve to live if he didn’t get everything he wanted from their relationship. So the problem with Game of Thrones isn’t that it features misogynistic acts. It’s that it doesn’t always recognize the misogyny of those acts—and that it teaches its viewers to share that dangerously clouded view.