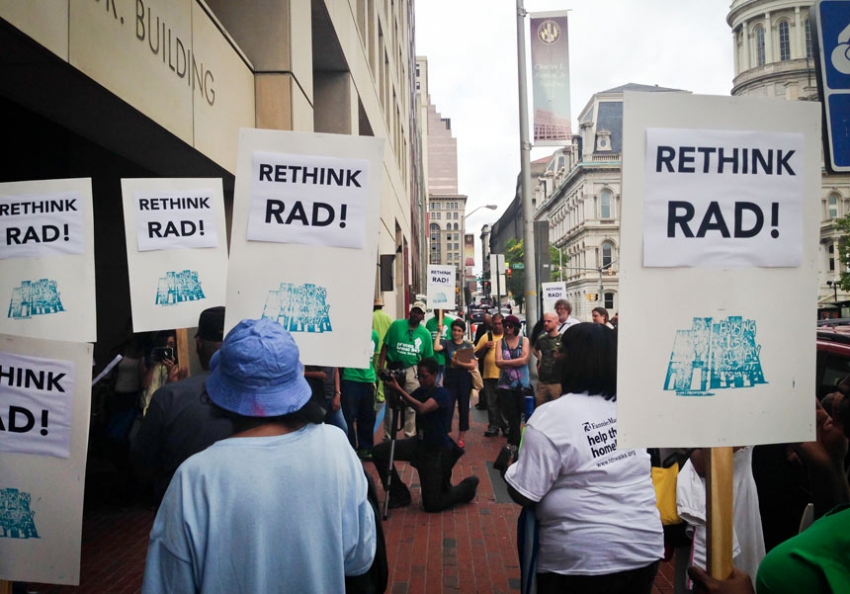 With little information on offer, many residents fear that new building owners will usher in harsh regulations, infringements on their organizing rights, and, ultimately, rent increases that they can’t afford.

After decades of decay, public housing in the United States could soon be relegated to the dustbin of history, thanks to a new Obama administration initiative called the Rental Assistance Demonstration (RAD) program. A pilot launched last year in response to a $26 billion backlog in needed repairs, RAD will hand over 60,000 units of public housing nationwide to private management by 2015. Though that’s only a fraction of the nearly 1.2 million public housing units that provide a safety net for more than 2 million people, housing advocates worry that RAD’s reforms are a Trojan horse for sweeping privatization of a crucial public asset.

In the wake of the Great Depression, a surge of tenant activism helped usher in public housing as a federally funded, locally administered program to address poor living conditions in urban areas. But the program came to be viewed less as a public good and more as housing of last resort, giving rise to a cycle of demonization and neglect, followed by pernicious “reforms.” RAD is the latest in a series of initiatives to address the underfunding of public housing with a familiar free-market solution: handing off state-owned assets to private actors who receive public subsidies in exchange for an increasingly involved role in managing housing for low-income tenants.

Though public housing residents have been assured that RAD will fund long-overdue repairs while keeping housing affordable and preserving tenants’ rights, similar promises have been broken by would-be free-market saviors before. Critics say RAD shares key features with past privatization initiatives that have displaced hundreds of thousands of public-housing residents. In the last decade and a half alone, more than 100,000 units of public housing have been lost to demolition or sale.

The first round of RAD is a pilot that allows for the conversion of only a limited number of units. But with HUD already seeking Congressional approval of further conversions, tenants are scrambling to determine the scope of RAD and stem the tide of privatization in their communities.

The city of Baltimore, where more than 40 percent of public housing units are slated to undergo conversion within the next year, is shaping up to be the first major RAD battleground. On June 12, about 60 public housing residents and building workers rallied in front of the Housing Authority of Baltimore City (HABC) to protest what they say has been a lack of transparency. Chanting “housing is a human right” and “rethink RAD,” residents demanded a voice in the process.

After five years of living in Baltimore’s Bel-Park Tower, Sharon Jones, 51, doesn’t contest the fact that the 11-story building is sorely in need of rehab. The roof in the building’s community room is leaking, she says, and her bathroom walls are covered in mold, exacerbating her asthma. But Jones, who covers her housing costs with federal disability insurance, worries that her rent will eventually be raised beyond what those payments cover. In that event, Jones, whose crippling arthritis has left her unable to hold down a job, believes she would have no choice but to try to return to work to make up the difference, resulting in a trade-off between her housing and her health.

Jones is the president of the building’s tenants council, but says she only learned of the scope of changes underway when a member of the housing authority’s Resident Advisory Board told some tenants off-the-record to seek legal counsel earlier this year. Cheron Porter, HABC’s communications director, tells In These Times that the housing authority made “numerous outreach efforts” to residents, including on-site meetings in the fall of 2013. But Jones says that these meetings stressed only the improvements that would be made to buildings, and that many residents didn’t learn about plans for private ownership until they were well underway.

Tenants and their allies are now urging HABC to slow down the process to allow for tenant input. “We want to be part of the decisions they’re making about our lives,” says Jones.

Tenants and advocates have been able to learn the names of developers who will soon own more than 4,000 public housing units in the city. Bel-Park Tower, for example, will be managed by Landex Companies, a private developer with a reputation for attempting to force stringent and potentially illegal regulations—including one that all tenants over the age of 10 carry photo identification, or risk being thrown off the premises—in a public-housing complex it managed in Annapolis, Maryland.

But residents have been unable to obtain the contracts that HABC is negotiating with such developers, which the housing authority has said are proprietary. (HABC did not supply these contracts upon an initial request; Porter told In These Times they had not been finalized.)

With little information on offer, many residents fear that new building owners will usher in harsh regulations, infringements on their organizing rights, and, ultimately, rent increases that they can’t afford. While developers who rehab housing through RAD will receive low-income housing tax credits, which place certain requirements on continued affordability, at the end of a developer’s RAD contract—typically 15 to 20 years—all bets are off, says Jessica Lewis, an organizer with the Right to Housing Alliance. “[The developers] will own the buildings outright, and there’s nothing preventing them from transitioning them to market-rate housing or selling them off,” she explains.

Tenants aren’t the only ones being kept in the dark about RAD. Unions representing security and maintenance workers in public housing have been told that as many as 200 employees could be laid off once ownership is transferred, says Anthony Coates, president of AFSCME Local 647. Porter acknowledges that RAD “will have an impact on jobs,” but says that “HABC is working to minimize that impact,” including by encouraging RAD developers to hire existing staff.

This situation has given rise to an alliance between tenants and workers in public housing units, both of whom hope to slow down RAD enough to explore options for revitalizing public housing that they say have never been given a fair shake. Instead of handing buildings over to developers, for example, a coalition of tenants and unions is exploring the possibility of managing public housing high-rises as community land trusts. “We’re being told that it’s too late, that there are no other alternatives,” says Coates. “In fact, there are plenty.”

Lewis worries that if the federal government perceives the RAD program to be a success, it could become a national model, foreclosing such alternatives permanently. “Public-housing authorities are trying to get out of the business of providing low-income housing altogether,” she says. “But we’ve seen how the strategy of providing public subsidies to private actors has worked, and it’s never to the benefit of residents.”