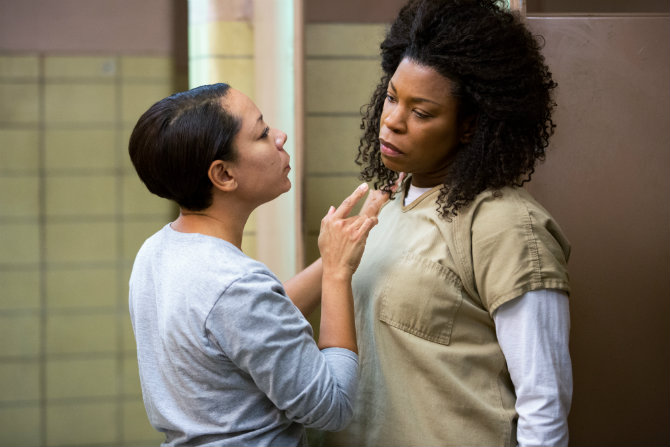 Orange Is the New Black, Season 2, Episode 5: A Song of Vice and Ire

The relationships among races on OITNB are as complex as the politics on Game of Thrones.

These women are at war because prison management isn’t providing them the basic resources that they’re guaranteed under the law. They’re not fighting for a piece of the pie; they’re fighting because most of the pie is missing altogether, and someone is trying to feed the whole prison with one slice.

One of the most uncomfortable and tension-inducing premises of Orange Is the New Black has always been that prisoners are expected to find acceptance, or seek power, by socializing exclusively with their own race. This, as incarcerated people have affirmed in commentary about the show, is how things tend to operate in real prison; it was something that Piper Kerman experienced, and described in the memoir upon which the show is based. In the long run, the show’s treatment of racism is probably far more responsible than simply refusing to acknowledge its existence. Even so, it’s difficult to accept “segregation and racialized power struggles” as a form of light-hearted entertainment—which is what OITNB frequently stabs at, with varying results.

Last year’s “WAC Pack,” for example, in which the prison’s different factions were explicitly named and pitted against each other by a Women’s Advisory Council election, proved to be a breaking point for several reviewers. (Those factions, in case you were curious, were Black, Latina, “Golden Girls”—old women of various races—and White, with the added and highly significant complication that “White” and “White Trash,” while both regarded as “White” by the administration, were actually different and oppositional groups.) “WAC Pack” was trying to be confrontational, and to make a point about how easily the guards could turn inmates against each other. But watching the characters take turns saying racist things to and about each other simply wasn’t very fun. This year, though, the show has doubled down on “WAC Pack,” building a plot arc around a season-long power struggle between factions that—as James Poniezowik noted in TIME—makes recapping the show feel a lot like summing up the maneuvers of the different houses on Game of Thrones.

Yet, unlike the gleefully unreal power politicking on HBO’s favorite nudity-vehicle, on OITNB, the factionalism and fighting is always tied into ugly realities of race and racism in the real world. And none of it can erase the fact that all of these women live at the mercy of the guards who control every aspect of their lives. They’re fighting, not for true power, but for a few more inches of breathing room within a system designed to suffocate them.

Yet this episode is where the struggle finally kicks into gear. So let’s sum up, HBO-fantasy-style, the lay of the land: House White Ladies, formerly the most powerful group in the prison, has overthrown its leader, Red, who is now working her way up the chain of command within the Golden Girls. Without Red’s smuggling operation and control of the kitchen, though, the white women don’t have much stake in the prison’s structure. And the Golden Girls, given their age, have never been presumed to have any stake at all. Over in House Trash—the white people who are too poor or too lacking in cultural capital to be accepted by the cooler, richer white women; in GoT terms, they’re sort of the Greyjoys—Leeanne has ousted the tyrant Pennsatucky, who’s now looking in vain for another group to take her in. They, too, are out of the game.

Which means that, at least in this episode, the politicking comes down to the women of color: The Latinas, under the rule of Gloria, now run the kitchen, giving them what ought to be an undisputed advantage. They control the food supply, which means they control anyone who needs to eat. But then there’s Vee, the woman who “used to run” Litchfield, and who is clearly looking to reclaim that position. She’s rapidly installed herself as the “den mother” for the other black inmates. (Except, oddly, for Sophia, who seems entirely sidelined from the “black inmates” story this year, for reasons that are never mentioned or explained. We know that Vee is homophobic, and it’s not a stretch to assume that she might be transphobic, too; it’s possible that Sophia is being intentionally excluded. But without any scenes to convey that point, it feels like a simple failure to write Laverne Cox into the storyline.) In any case, Vee is now working to get them back on top. For the moment, everything comes down to Gloria and Vee, and which one of them can rule.

As is so often true, both on OITNB and in real-life prison, the fight for “power” is really a fight for basic human comfort: The episode begins with the Latina bathroom literally overflowing with shit, raw sewage bubbling up from the floors. Gloria takes her kitchen crew to the black women’s bathroom, and demands to cut in line for the showers, as she presumes is their right: If they don’t get to work before the other inmates, no one will get breakfast. However, Vee says, “her girls” aren’t willing to bow down to the kitchen crew. And with a little manipulation from Vee, soon enough, both crews are at each other’s throats. Flaca frames Cindy for punching her, getting her in trouble with a guard. The black women steal the Latinas’ shoes to make them late for work. The Latinas salt the black women’s food to make it inedible.

It feels like a bunch of silly pranks. As always, though, the stakes are high and determined by the people in charge. Janae, upset after her food is ruined despite her intentional decision to stay out of the fight, trips a pregnant Daya in front of Bennett. Bennett slams Janae to the ground, threatens her with more time in solitary, and has her access to commissary taken away for a month. It’s an emotional overreaction from Bennett, whose relationship with Daya is making him increasingly incapable of doing his job. But it’s also yet another iteration of the very real racism Janae, in particular, has experienced: In the past, she’s been sent to SHU for “offenses” like shouting at a racist guard, while other inmates wreaked havoc without so much as a slap on the wrist. And as she fumes now, black inmates are disproportionately targeted by the prison system, and get more time for lesser offenses. In this climate of escalation, Vee’s attempts to stoke her girls’ fury and sense of disenfranchisement are more effective than ever, because they’re founded on the injustices that have shaped these women’s lives. After Janae vents about her unfair treatment, Vee nods wisely, and tells her girls that they need to be angrier.

Vee's right about the need for anger in response to this systemic bigotry, but manipulative in where she tells the girls to aim it: None of the injustices Janae has faced are the fault of Gloria, who is only trying to protect her crew, and to command the respect that comes with her position. As trivial as it might be—and as tiny, in the grand scheme of things, as her power is; as Caputo reminds her, she’s “important, but replaceable”—being the head chef has always meant something, even if that “something” is as inconsequential as being able to cut in line for a shower.

In fact, she wouldn’t even be in the position of needing to cut the line, were it not for the incompetence and neglect of the administration. It should be possible, after all, to fix the flooding problem in the Latina bathroom, and Caputo tries to do so, but Fig, unwilling to spend prison funds on anything but herself, won’t shell out the necessary $80,000 for repairs. These women are at war because prison management isn’t providing them the basic resources that they’re guaranteed under the law. They’re not fighting for a piece of the pie; they’re fighting because most of the pie is missing altogether, and someone is trying to feed the whole prison with one slice.

Amid this rigged battle for respect, we also finally see glimpses into Gloria’s backstory, and how her attempts to escape an abusive partner through a food-stamp scam landed her in prison. I confess, after having been particularly excited for her flashback episode—Selenis Levya has always given such a tough, funny, worldly performance that I left every episode of Season One wishing I could spend more time with her character—that this left me a little cold. The show’s treatment of domestic violence is, in the abstract, admirable: The story makes it clear that Gloria wasn’t abused because she was “weak,” that she’s still the same formidable, don’t-fuck-with-me Gloria with everyone except the man who beats her up. It shows her rationalizing the abuse and making failed attempts to leave, the way domestic violence victims usually do. (It also reveals that Gloria, who practices Santeria, may have actual, no-fooling magic powers; after she’s sent to prison for a food-stamp scam, her prayer candles set her abuser on fire.) My problem, though, is that abstract is all it is: It emerges less like a compelling narrative and more like someone making all the right points about domestic violence. The show is usually so nuanced and original that seeing Gloria’s past play out as a set of talking points is disappointing.

But now, in Litchfield, Gloria is determined not to get played that way twice—to never give up the respect she deserves. And so, she corners Vee and threatens her, doing her job as the general of her crew. Her mistake is in assuming that Vee ever had the best interests of her own crew in mind: Vee crumbles and begins crying, offering to “trade” Gloria’s people the black women’s bathroom if she’ll get Taystee and Janae a spot on the maintenance crew. Gloria’s tough, but she’s not inhuman, and facing a sobbing woman offering to let her win the fight, she backs down. (“Jesus, I didn’t even fucking hit you,” she says, obviously rattled, and probably thinking about what getting hit can do to a woman who’s usually good at being strong.) And this, as Red warns her later on, is exactly what Vee wanted.

Because this is who Vee is: a woman who’ll let “her girls” bathe in shit, to get what she wants. Cindy is in the warehouse; Taystee and Janae are on maintenance; all of her girls are exactly where she needs them to be. This isn’t the end of the power struggle; it’s the moment where Vee gets all of the pieces in place, so that she can begin to play the game in earnest.