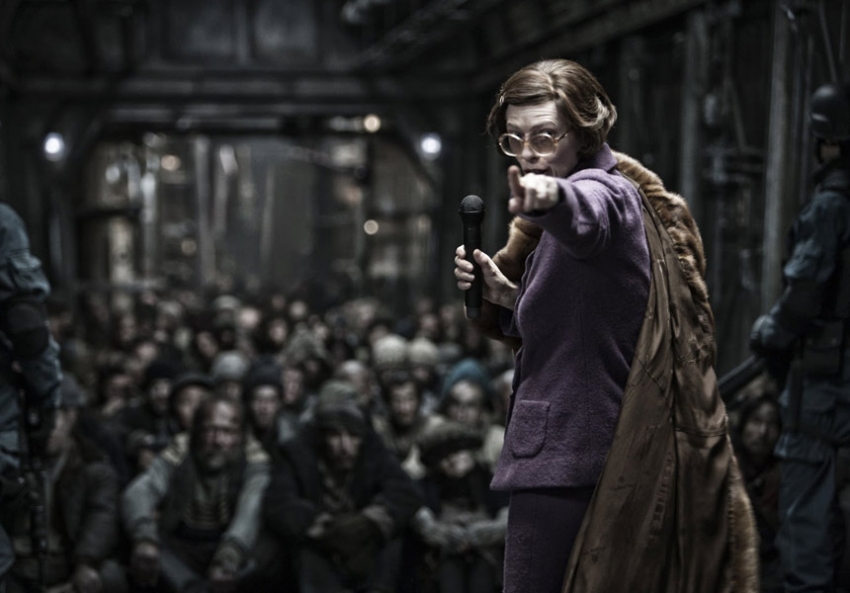 'Snowpiercer' mythbusts the West's image of revolution. (Photo via Radius-twc)

In ‘Snowpiercer,’ Revolution is Brutal—And Necessary

The sci-fi flick doesn’t fall into the trap of romanticizing the struggle.

In 'Snowpiercer,' the overthrow of the oppressors isn’t beautiful; it’s just a whole lot of people killing each other, an attempt to determine the ideology by racking up the biggest body count.

Snowpiercer, the South Korean sci-fi movie that finally hit the U.S. last month, may turn out to be the sleeper hit of the summer. Which is quite an accomplishment, given that we were never supposed to see it.

The film’s development struggles at this point are legendary: Harvey Weinstein of The Weinstein Co., bought the rights to distribute the film from director Bong Joon-Ho in 2012, based on his script. But the finished project was deemed unsuitable for American release. It was too long, too violent and too straight-up weird. According to some reports, the company feared “the film wouldn’t be understood by audiences in Iowa and Oklahoma.” Weinstein demanded substantial cuts; Bong didn’t provide them. So the plans to launch the film in the US were scrapped.

It was only after Snowpiercer proved to be a massive success in Europe and Asia that Weinstein consented to release the movie to U.S. audiences. Yet, rather than the summer-blockbuster treatment its content would seem to demand—after all, it’s a big, explosion-packed action movie starring Chris “Captain America” Evans; it hardly seems too rarefied for audiences to embrace—the movie only opened in eight theaters. I had never heard of Snowpiercer—until I looked around and realized it was suddenly the favorite summer movie of everyone I know.

There is a reason for all the buzz, however. Snowpiercer is indeed long, dark to the point of being nihilistic, and really, extremely weird. (How weird? Every sci-fi action movie since Star Wars has had an obligatory scene where the heroes face off against masked, interchangeable goons, but this is the only movie I’ve seen where the goons threaten the heroes by slowly, ominously waving a dead fish.) It’s not only violent; at times, it’s stomach-churningly gross. Its most unambiguously heroic character is a surly addict who trades his heroism for drug fixes and may or may not kill all of humankind by the end of the movie. And yet for all that, the story is not remotely hard to understand. Which, it turns out, may have been the real problem all along: It’s one of the more openly, effectively subversive summer blockbusters you’ll ever see.

Snowpiercer is set in a post-apocalyptic near-future, where an airborne chemical intended to stop global warming has instead reduced Earth to an unlivable ice-planet. It now takes only a few minutes of exposure to the open air to freeze human flesh so severely that the affected body parts shatter upon being touched. Naturally, most of humanity has died. The survivors live on the Snowpiercer, a gigantic train with a perpetual-motion engine. The train is run by a mythical, never-seen man named Wilford, regarded as both a supreme dictator and a living god, as his “Sacred Engine” is the only thing keeping humanity from extinction. Yet Wilford is not a kind or just deity: The society of the train depends on rigid, immutable class distinctions, with generations of people defined by their family’s original ticket purchase. The first-class passengers live in the front cars, in perpetual wealth and luxury; the economy-class passengers get by in the middle; the “freeloaders,” people who piled onto the train to escape the apocalypse and didn’t purchase tickets first, are confined to the back of the train, where they are starved, abducted, brutalized, enslaved and beaten to satisfy Wilford’s needs and whims.

As you may have noticed, the plot doesn’t make one damn bit of sense. (And it makes less sense as the film progresses; we learn that the apocalypse happened in 2014, and that the train has only been running for seventeen years, which doesn’t seem quite long enough for humanity to have abandoned all of its previously existing belief systems in favor of train-conductor-worship. Also, at one point, it’s abruptly announced that one of the characters is psychic, with no one seeming alarmed or even curious about the fact that psychic powers are apparently a real thing.) Yet, once you’ve accepted the movie’s warped dream-logic, it does work strikingly well as political allegory.

Sooner or later, the back-of-the-train underclasses can no longer live with their oppression. Wilford has started to demand the abduction of their children, and parents who try to resist are brutally beaten, even mutilated; the imagery in these scenes is calculated to recall both slavery and (according to Bong) the Rodney King beatings. The frequent exhortations from the luxury-class representative Mason (Tilda Swinton, having the time of her life in a weird British accent and fake teeth) to “know your place” don’t help any. The abductions spark a riot, which becomes a full-blown revolution, with the free passengers—led by a tormented Chris Evans, and chiefly aided by the aforementioned surly addict (Song Kang-ho) and his randomly-psychic daughter (Ko Ah-sung)—working their way to the front of the train, car by car, so that they can kill Wilford and take the Sacred Engine for themselves.

The film’s apparent endorsement of revolutionary violence is shockingly blunt, at times flat-out gleeful in its brutality. At one point, we see a heavily pregnant woman get stabbed in the neck, and we’re meant to applaud, because, well, she’s an oppressor, so she had it coming. Like any movie that tries to express complicated points through elaborate fight scenes, it can be reductive: Apparently, not a single one of the luxury-class passengers is anything other than ridiculously evil. Even the children are hateful little monsters. For much of the film, we’re told that there is only one way forward, and that way is death: Death to the oppressors holding the free passengers back from the engine, and death to the free passengers themselves, who drop like flies in service to the cause.

Yet the film is much smarter than it looks. The gore is in service to a larger point. Americans often find it easy to romanticize revolution, partly because we’ve never lived through one, and partly because it’s wired into our country’s DNA. We imagine noble and strangely bloodless wars in which heroes fight for Truth, Justice, and the (Captain) American Way, and inevitably triumph due to the righteousness of their beliefs and the evil of their oppressors. Bong Joon-Ho, on the other hand, has actually participated in a revolution—the overthrow of the South Korean military dictatorship—and his vision is far less romantic. In Snowpiercer, the overthrow of the oppressors isn’t beautiful; it’s just a whole lot of people killing each other, an attempt to determine the ideology by racking up the biggest body count. It’s so horrible to live through, the oppressed will only try it when they have nothing else to lose. Bong’s vision of the glorious class struggle looks like a lot of people in a tight, enclosed space, hacking each other into pieces, and trying not to get hacked apart in the process.

Snowpiercer also makes sure we understand why the oppressed need to revolt, why killing and dying have become their only good options. Their living conditions are sometimes gag-worthy—the people at the back of the train are fed “protein bars” made of crushed and jellied cockroaches; they like them because what they had to eat before was much worse—and sometimes just terribly sad, like the tradition of making portraits of disappeared children so that their parents can still see their faces. But they always, crucially, feel real; the last summer blockbuster with a “radical” message of class revolt, Elysium, mainly conveyed the plight of the underclass through evil robots and angelically coughing children. It was cartoonish and numbing. Here, we actually feel the horror of living in a system where you are utterly powerless and utterly expendable.

Which—without giving too much away—turns out to be the real message of Snowpiercer: Is it worth living, at all, in such a system? Can you end the degradation by taking over the apparatus, running the engine that runs the world, or should you try to get out entirely? And, if you tried to get out, could you? This is a dark, bleak movie, which suggests that even revolutions and uprisings may ultimately play into the cycle of human self-destruction, but that they may still be the only means we have to challenge it. It doesn’t simply praise the valor of those who rise up against their oppressors, but asks whether that uprising can succeed, and on what terms—if any of us has what it takes to change the system, and if there is such a thing as life outside of it. It ends with what may be the end of everything, and may be the beginning of freedom, and I don’t believe we’re meant to know which one we’re seeing. We’re only meant to ask ourselves what we would do—or risk—to be free, which may be the most radical question of all.