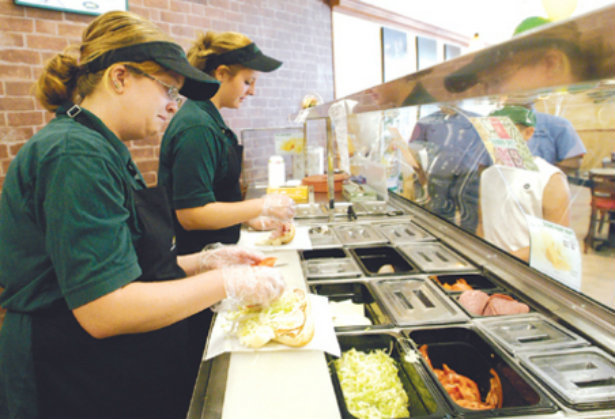 In the last decade, the company [Subway] has been found guilty of about 17,000 labor violations. Now, at least one group of workers is fighting back.

Subway may claim to be the “leader in fast, healthy food,” but that alleged commitment to wellness often doesn't extend to its employees. In the last decade, the company has been found guilty of about 17,000 labor violations. Now, at least one group of workers is fighting back. On July 18, after a three-month campaign, employees of a Subway franchise in Bloomsbury, N.J. voted 8-5 to join the Retail, Wholesale, and Department Store Union (RWDSU) Local 108.

The Bloomsbury workers are in a unique position: Rather than staffing a standalone Subway, they’re employed at a franchise tucked into a Pilot Flying J travel center, where gas attendants, cashiers, and maintenance workers voted in February to join Local 108, too. This initiative, says Local 108 President Charles Hall, helped drive the Subway workers to organize in turn.

Hall says that workers in both areas of the center share similar concerns, including “Low wages across the board for all workers and sporadic scheduling,” as well as a lack of opportunities for advancement or raises.

“Many of the workers earned minimum wage or slightly above minimum wage, and they had limited paid time off and holidays,” Hall tells In These Times. “These factors made the workers feel that they were being treated unfairly and that management wasn't listening to them.”

The Subway employees in particular, reports Hall, want the company to address medical coverage, a pay rate that is tied to the New Jersey cost of living and grievance procedures.

Ashley Sprouse, one Subway employee who supported the campaign, says that workers had to unite to navigate obstacles created by managers. “The company threw many roadblocks in front of us and hired an anti-union professional to scare us to vote 'no,'” Sprouse told the AFL-CIO, “but we overcame this and were victorious.”

Given that the Subway franchise is part of a larger center and not an independent location, some advocates have expressed some hesitation to celebrate the development as a major triumph. Still, many fast-food activists from around the country think it’s a sign of progress within the industry.

“[It] shows that we can fight back and win,” says Megan Brophy, a New Jersey organizer with the Socialist Alternative-affiliated group 15 Now. “These brave Subway workers are an inspiration to us all!”

William A. Hudson is a summer 2014 In These Times intern.