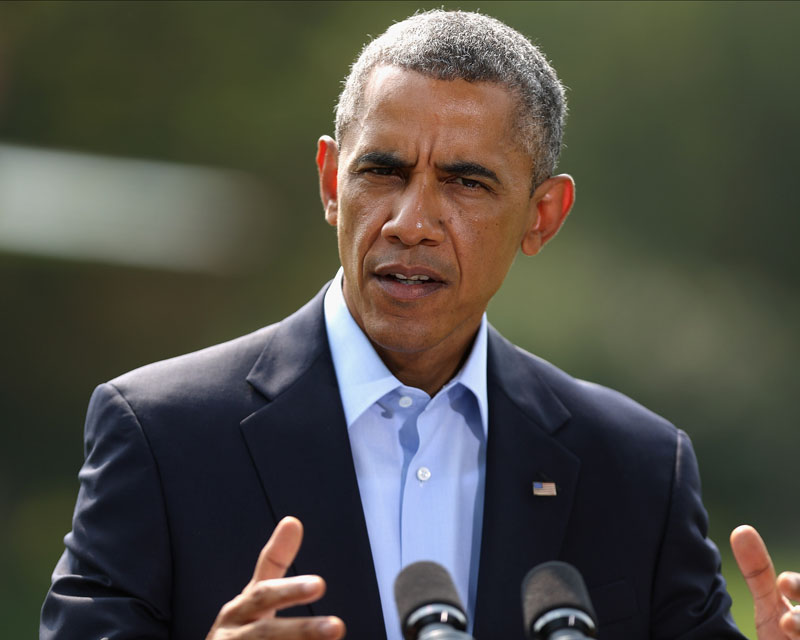 President Obama announced Saturday that an air war against ISIS in Iraq could last weeks or even months. (Chip Somodevilla / Getty)

Under Obama, the militarization of American foreign policy is so complete that serious, smart people no longer imagine alternatives to war.

In ordering air strikes against enemies of the U.S.-supported government in Iraq, President Barack Obama has created a new opportunity for Americans to ask: Is war the best we can do in the domain of world affairs?

Promising an air war lasting weeks and possibly months, President Obama reversed course on the failed U.S. military episode that he proudly claimed to have ended in 2011. Opposition to the Iraq War defined Obama’s original presidential campaign and his first term in office. In ordering air strikes against forces of the Islamic State of Iraq and Syria (ISIS), Obama created fresh reasons to object to the militarization of American foreign policy and our country’s entrenched preference, in a crisis, of shooting first and asking questions later.

Obama’s decision process may appear straightforward: By choosing to attack by air, he avoids putting U.S. troops on the ground in Iraq and the public scrutiny that would accompany such an incursion. But with his inability to see beyond these two options, Obama has sustained the failure of the moral imagination that afflicted his predecessor and threatens to become his own defining legacy in the Oval Office. Obama’s presidency has not seen a single day of peace. Under Obama, the militarization of American foreign policy is so complete that serious, smart people no longer imagine alternatives to war.

Future generations may look back on Obama’s decision to resume America’s combat role in Iraq as a source of shame and mystification. At present, his defenders ask: What else could the President do?

The question is a spurious one. Objecting to Obama’s launch of an air war in Iraq does not require his critics to provide an alternative path in Iraq and the region. This is not a debate about tactics (though, if Obama’s critics had all the information he possesses, it's possible they might easily construct peaceful alternatives to air war); it is about tunnel vision. We've seen no indication that the Obama administration even considered attempting to engage with ISIS diplomatically before declaring the necessity of air strikes. In today's political culture, the notion of speaking to one’s enemies—once the standard operating principle of diplomacy—is inconveivable, and military action is seen as the only recourse.

In the case of Iraq, that recourse may well be futile. Keeping the current Iraqi government in power will not be easy, even with air power. What was once Iraq has already fractured into pieces, and putting them back together again, especially now that ISIS has seized vast amounts of territory, may be impossible. Obama, of course, does not wish to be held responsible for “losing” Iraq, yet his air attacks would seem only likely to delay the inevitable.

How much better for the president—this president or any president—to use the Iraq crisis to begin the long, hard process of putting America’s relations with the world on some kind of sane, ethical, sustainable keel. To reintroduce diplomacy into America’s interactions with the world. To use force truly only as a last resort. To end the country’s monomaniacal focus on shooting first and asking questions later. To talk instead of kill. Even if such an exercise would be fraught, it would also be more fruitful than re-entering a military battle that was lost long ago.

Update: On Wednesday, President Obama's deputy national security advisor told reporters that the president would consider sending in group troops to help rescue thousands of Yazidi refugees who have been trapped by ISIS on a mountaintop in northern Iraq.