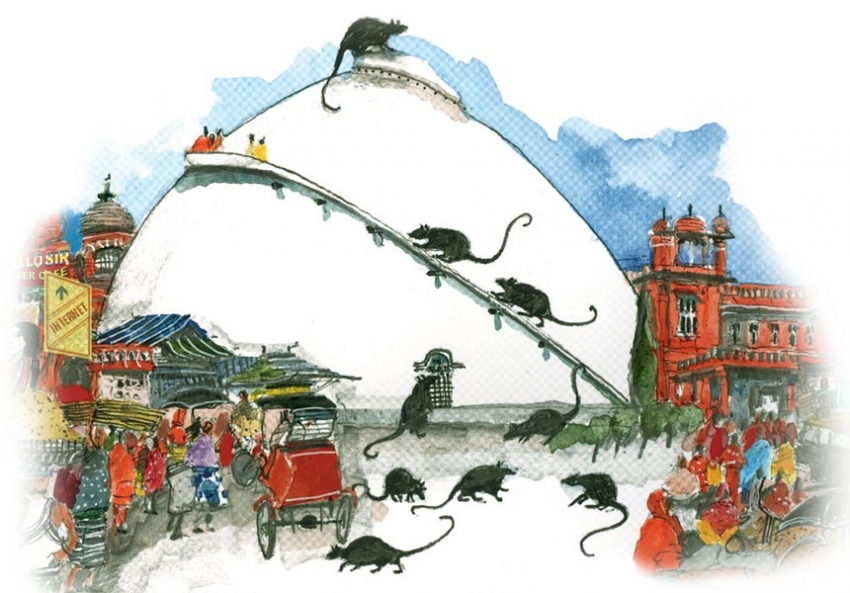 Rats have firmly staked their claim on the city of Patna (Illustration via Duke University Press).

The Rats of Patna

If rats were accepted as a popular food item, and as a consequence rat farming was commercialized, the Musahars’ income would inevitably go up.

In Patna, the capital of Bihar, the city where I grew up, rats have burrowed under the railway platform causing it to collapse in places. In the library at Patna University, I heard that rats had taken over a section of the stacks and the library was closed. Newspapers periodically carry reports that babies have been bitten by rats. One such report helpfully explained that it was the traces of food on the unwashed faces of infants that attracted the rodents.

In the middle of the night one winter, during a visit to my parent’s house in Patna, I was sitting at the dining table with my jet-lagged 2-year-old son, watching a cartoon on my computer. We must have been sitting there quietly for about half an hour before my little boy asked, “Baba, what is that?” He was pointing beyond the screen. There were two enormous rats walking away from us. They looked like stout ladies in tiny heels, on their way to market.

For a while I had hoped to get a professional pest control agency to come and trap the rats. The problem was a pressing one—rats had carried away my mother’s dentures. But all I could find was a man who would come and put packets of rat poison in different rooms.

I didn’t find an exterminator in Patna. But I did meet a man who wanted rats to be killed for food. Vijoy Prakash is a senior official in the Bihar administration—the principal secretary in the Department of Rural Development—and he has caused controversy by suggesting that restaurants should put rat meat on their menus. Questions about this proposal were raised in the Bihar legislature, and the papers had reported on it with some relish. I met Prakash in his office in the Old Secretariat in Patna. He was a kind-looking man, quiet and dark skinned, his eyebrows flecked with gray. In a spacious, air-conditioned office, Prakash was working on a report at his desk. I looked around while I waited. A wooden board to my right listed the names of the administrators who had served in that office. The names were carefully painted in white on the varnished wood. Number 22 on that list, the last name, was Prakash’s. I noted with pleasure and surprise that number 7 was my father. My father, who retired from service long ago, must have occupied the chair on which Prakash was now sitting when I was still a student. Had I ever visited my father in this room, bringing him lunch during a trip home? I couldn’t remember if I had.

Prakash, who studied astrophysics, is a rationalist. He wants people to have more enlightened views about nature and society. His mission, I realized when we began talking, isn’t simply to change the popular perception of rats. Instead, it is to alter the views that most people have of a particular community near the bottom of the social ladder: the Musahars, known all over Bihar as the rat-eating caste. Prakash says that rats trapped in fields have long been a part of the Musahars’ diet, and there is no reason why others cannot also benefit from protein-rich rat meat.

His main point was to engineer change in the living conditions of the Musahars, who are among the poorest and most marginalized groups in Bihar. If rats were accepted as a popular food item, and as a consequence rat farming was commercialized, the Musahars’ income would inevitably go up. Like every good bureaucrat I’ve met, Prakash rattled off statistics to support his theory. In 1961 the rate of literacy among Musahars was merely 2.5 percent; 40 years later, the rate of literacy had risen to only 9 percent. As far as rats were concerned, in a country and state where a significant percentage of people went hungry, rats ate 30 to 40 percent of the crops. In each rat hole excavated in a field, you could find up to 14 kilograms of grain. When these two facts are appraised side by side, Prakash pointed out, his plan makes even more sense.

I wasn’t entirely convinced, but Prakash was unfazed by my skepticism. He said that even as recently as 50 years ago, chicken wasn’t allowed in many homes in Patna. It was just a matter of time before rats would be “domesticated” and eaten in homes.

“Yes,” he said, in the Musahar toli  in Naubatpur. He had gone there with his wife, a teacher, and they had been invited to have lunch with the family they were visiting. The rats had been fried and then cooked in a curry. The dish was served with rice and tasted delicious.

I had known Musahar families in my village in Champaran. In fact, once when I was a boy, I had just finished bathing at the hand pump a little distance from my grandmother’s house when a woman approached me. Behind her was a child wearing a ragged pair of shorts. He was younger than me, maybe 7 or 8 years old. I remember very clearly that the woman was tall, with curly hair, and her sari was mustard colored. She asked me politely when I was going to return to Patna. My father had said we were to leave in an hour.

“Can’t you take him with you?”

I had seen the woman before in the village. I don’t think I had spoken to her. The boy was trying to hide behind his mother. The woman spoke again because I had said nothing.

“He will play with you. He will do all the work that needs to be done in the house. Take him with you. There is not enough here for him to eat.”

I went back to the house and pointed out the woman to my mother or an aunt. Somebody recognized her. I was told that she was a Musahar. She wanted her son to be a servant in our home in Patna. We were upper caste, and I was told that my grandmother would not allow a Musahar to step inside the house.

Many years would pass before I would read Phanishwar Nath Renu’s memoir about doing relief work during the flood caused by the waters of the Mahananda in 1949. Kerosene was needed, and matches, and medicine for feet that were rotting from prolonged exposure to water.

Renu, along with a doctor, traveled through the flood-hit areas in a boat. He wrote that they had heard that for several days the Musahars had been eating any fish and rats that they had managed to singe over a fire. Once the two of them reached the flooded basti, they heard the sound of the dhol and cymbals. A platform had been erected over the water and served as a stage. A dance was in progress. Wearing a red sari, a dark-skinned Musahar man was pretending to be a bride; behind the figure in the sari was the husband, begging her to come back home. But the bride refused, complaining about her abusive mother-in-law and her sister-in-law’s sharp tongue. It was now the husband’s turn to sing a song. He promised to break his sister’s legs and to push his mother out of the house. The audience, smeared with mud and hungry, was full of laughter.

Like the great writer Renu, I would sometimes find joy among those I had expected only to be burdened by pathos. Joy is less common, no doubt, but is as real as suffering. Writers often demonstrate inordinate zeal when portraying the misery of the downtrodden and the oppressed: it is only a form of narcissism with the writer enamored of his or her sensitive self faithfully recording the pain of others. No doubt I am guilty of this, too, but I plead equal fondness for folly, pleasure, guile, greed, and hypocrisy. Hence the rats.

This essay is excerpted from A Matter of Rats: A Short Biography of Patna by Amitava Kumar (Duke University Press).

Amitava Kumar is the Helen D. Lockwood Professor of English at Vassar College and the author, most recently, of A Matter of Rats: A Short Biography of Patna.