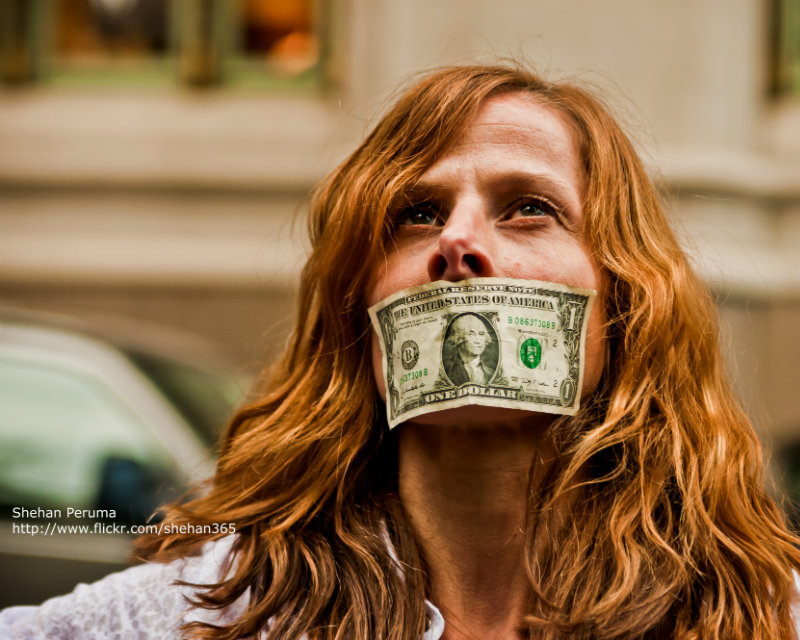 According to a recent poll by Opinion Research Corporation, 68 percent of voters think corporations that spend "big bucks" to elect a Congressman can pressure him to change his political agenda. (Flickr/Shehan Perhuma)

The GOP says yet again that control of our political system by the ultra-rich is just fine, thank you.

The Supreme Court's right-wingers said it was fine for corporations to drown out the pleas of the non-rich. Last week, Senate Republicans agreed.

Senate Republicans voted unanimously last week for elections that are competitions of cash, with candidates who amass the most money empowered to shout down opponents.

The GOP rejected elections that are contests of ideas won by candidates offering the best concepts.

Forty-two Republican Senators on Thursday opposed advancing a proposed constitutional amendment called Democracy for All. It would have ended the one percent’s control over elections and politicians. It would have reversed the democracy-destroying Citizens United and McCutcheon decisions by permitting Congress and state legislatures to once again limit campaign spending. Republicans said no because they favor the system that indentures politicians to wealthy benefactors.

As it stands now, corporations and billionaires may spend unbounded and unreported billions to buy elections. They’re likely to invest $2 billion in this fall’s contests. That’s thanks to the activist right-wing justices on the Supreme Court who upended a century of campaign finance law with rulings like Citizens United in 2010 and McCutcheon this year.

The result is that everyone retains their free speech rights, but the wealthy and corporations, who can afford gigantic amplifiers, can now use their money to buy the loudest voice, one that overwhelms and silences those of tens of millions of working Americans. The right-wingers on the Supreme Court said it was fine for the wealthy and corporations to use their money to drown out the pleas of the non-rich. And Senate Republicans agreed last week.

This has made the majority of Americans very, very cynical about politicians and elections. The typical voter knows his or her $5 or $25 or $100 contribution to a candidate can’t compete with the $10,000 or $100,000 or $1 million gifts from corporations and billionaires.

They pay for access. The Senator will make time to see the CEO whose corporation donated $250,000. The Senator won’t do the same for the worker who gave $25.

Big bucks also buy votes. Americans believe politicians’ positions on issues are the ones that the biggest benefactors told them to take. In private meetings, of course. A poll by the Opinion Research Corporation in 2012 found that 68 percent of voters, including 71 percent of Republicans, think that a corporation that spends $100,000 to help elect a Congressman could successfully pressure him to change position on proposed legislation.

While Republican politicians celebrate that outcome, most Americans do not. And that includes Republican voters. A poll in July by Greenberg Quinlan Rosner Research found 73 percent of voters in the 12 most competitive Senate battleground states want the Citizens United ruling reversed, including significant majorities of Republicans.

Still, Senate Republicans, groomed by Minority Leader Mitch McConnell, ignored the sentiments of the majority of citizens and blocked the Democracy for All amendment. McConnell, who once supported a similar constitutional amendment, now praises unlimited, unregulated, undisclosed campaign contributions. He told a group of fat cat GOP donors in June that he just didn’t know where he’d be without them.

Well, not in office, that’s for sure. He would be in far greener – as in greenbacks – pastures, cleaning up with former House GOP Majority Leader Eric Cantor, who lost his primary this year, then quickly resigned so he could grab $1.8 million as vice chairman at a Wall Street investment bank. Wealthy donors and corporations reward their indentured servants even when they lose elections.

Republicans didn’t always endorse this corruption. Conservative GOP Sen. Barry Goldwater, the party’s nominee for President in 1964, supported campaign finance reform in 1983, saying: “Our nation is facing a crisis of liberty if we do not control campaign expenditures. We must prove that elective office is not for sale. We must convince the public that elected officials are what James Madison intended us to be, agents of the sovereign people, not the hired hands of rich givers.”

Former Sen. Warren Rudman, a Republican from New Hampshire who campaigned for reform, wrote after the Citizens United ruling, which he called rash and immoderate: “Supreme Court opinion notwithstanding, corporations are not defined as people under the Constitution, and free speech can hardly be called free when only the rich are heard.”

Another Republican Presidential nominee, John McCain, whose name graced the bipartisan McCain-Feingold campaign finance reform act of 2002, said after it was struck down by the Citizens United ruling: “What the Supreme Court did is a combination of arrogance, naiveté and stupidity the likes of which I have never seen.”

Still, McCain joined all of the other Republicans in the Senate Thursday to obstruct a constitutional amendment to fix that problem.

Sen. Tom Udall, the New Mexico Democrat who proposed the amendment, said he’ll continue to press for its passage. He must because that limitless campaign cash is ruining the American democracy.