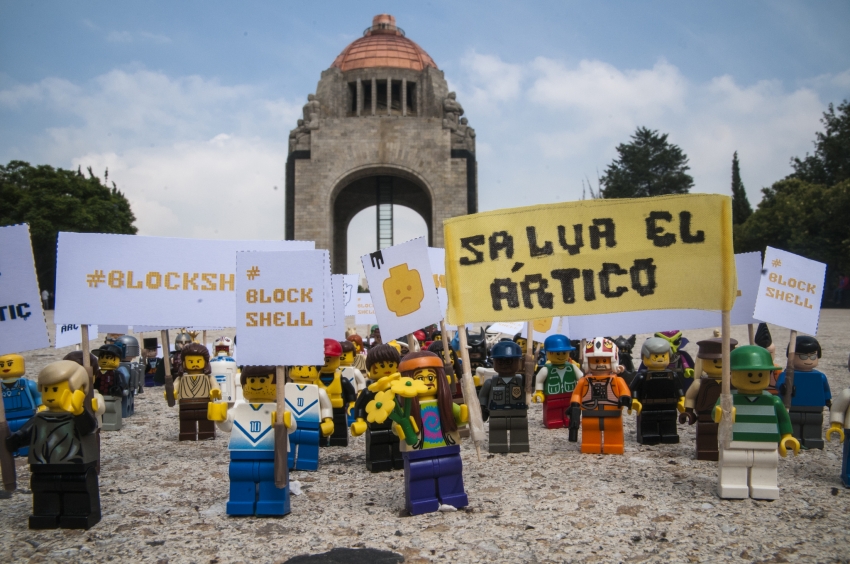 The Polluters Must Pay

Fossil fuel companies’ profits are morally illegitimate. The public has the right to take those profits—to clean up their mess.

Are fossil fuel companies—long toxic to our natural environment—becoming toxic in the public relations environment as well?

When the call came in that the University of Glasgow had voted to divest its 153-million-pound endowment from fossil fuel companies, I happened to be in a room filled with climate activists in Oxford. They immediately broke into cheers. There were lots of hugs and a few tears. This was big—the first university in Europe to make such a move.

The next day there were more celebrations in climate circles: Lego announced it would not be renewing a relationship with Shell Oil, a longtime co-branding deal that saw toddlers filling up their plastic vehicles at toy Shell gas stations. “Shell is polluting our kids’ imaginations,” a Greenpeace video that went viral declared, attracting more than 6 million views. Pressure is building meanwhile on London’s Tate Modern to sever the museum’s longtime relationship with BP.

What is happening? Are fossil fuel companies—long toxic to our natural environment—becoming toxic in the public relations environment as well? It seems so. Galvanized by the Carbon Tracker Initiative research showing that these firms have several times more carbon in their reserves than our atmosphere can safely absorb, the city council of Oxford, England, has voted to divest; so has the British Medical Association.

Internationally, there are hundreds of active fossil fuel divestment campaigns on university and college campuses, as well as ones targeting local city governments, non-profit foundations and religious organizations. And the victories keep getting bigger.

In May, for instance, Stanford University in California announced it would divest its $18.7 billion endowment from coal. And on the eve of September’s United Nations climate summit in New York, a portion of the Rockefeller family—a name synonymous with oil—announced that it would divest its foundation’s holdings from fossil fuels and expand its investments in renewable energy.

Some observers are skeptical. They point out that none of this will hurt oil or coal companies—different investors will snap up their stocks and most of us will keep buying their products. Our economies, after all, remain hooked on fossil fuels, and affordable renewable options are too often out of reach. So are these battles over fossil fuel investments and sponsorships just a charade? A way to clean our consciences but not the atmosphere? The criticism overlooks the deeper power and potential of these campaigns. At their core, all are taking aim at the moral legitimacy of fossil fuel companies and the profits that flow from them. This movement is saying that it is unethical to be associated with an industry whose business model is based on knowingly destabilizing the planet’s life support systems.

Every time a new institution or brand decides to cut its ties, every time the divestment argument is publicly made, it reinforces the idea that fossil fuel profits are illegitimate—that “these are now rogue industries,” in the words of author Bill McKibben. And it is this illegitimacy that has the potential to break the stalemate in meaningful climate action. Because if those profits are illegitimate, and this industry is rogue, it brings us a step closer to the principle that has been sorely missing from the collective climate response so far: The polluter pays.

Take the Rockefellers. When Valerie Rockefeller Wayne explained her decision to divest, she said that it was precisely because her family’s wealth was made through oil that they were “under greater moral obligation” to use that wealth to stop climate change.

That, in a nutshell, is the rationale behind “the polluter pays.” It holds that when commercial activity creates hefty public health and environmental damage, the polluters must shoulder a significant share of the costs of repair. But it can’t stop with individuals and foundations, nor can the principle be enforced voluntarily.

As I explore in my book This Changes Everything, fossil fuel-based companies have pledged for more than a decade to use their profits to transition us away from dirty energy. BP has rebranded itself as “Beyond Petroleum”—only to back off renewables and double down on the dirtiest fossil fuels.

Richard Branson pledged to spend $3 billion of Virgin’s profits finding a miracle green fuel and fighting global warming — only to systematically lower expectations while sharply increasing his fleet of airplanes. Clearly, polluters aren’t going to pay for this transition unless they are forced to do so by law.

Up until the early 1980s, that was still a guiding principle of environmental lawmaking in North America. And the principle hasn’t totally disappeared — it’s the reason why Exxon and BP were forced to pick up large portions of the bills after the Valdez and Deepwater Horizon disasters.

But since the era of market fundamentalism took hold in the 1990s, direct regulations and penalties on polluters have been superseded by the drive to create complex market mechanisms and voluntary initiatives designed to minimize the impact of environmental action on corporations.

When it comes to climate change, the result of these so-called win-win solutions has been a double loss: Greenhouse emissions are up and support for many forms of climate action is down, in large part because policies are perceived—quite rightly—as passing costs to already overburdened consumers while letting big corporate polluters off the hook.

It is this culture of lopsided sacrifice that has to stop—and the Rockefellers, oddly, are showing the way. Large parts of the Standard Oil trust, the empire John D. Rockefeller co-founded in 1870, evolved into Exxon Mobil. In 2008 and 2012, Exxon earned about $45 billion in profits, which remains the highest yearly profit ever reported in the U.S. by a single company. Other Standard Oil spin-offs include Chevron and Amoco, which would later merge with BP.

The astronomical profits these companies and their cohorts continue to earn from digging up and burning fossil fuels cannot continue to hemorrhage into private coffers. They must, instead, be harnessed to help roll out the clean technologies and infrastructure that will allow us to move beyond these dangerous energy sources, as well as to help us adapt to the heavy weather we have already locked in.

A minimal carbon tax whose price tag can be passed on to consumers is no substitute for a real polluter-pays framework—not after decades of inaction has made the problem immeasurably worse (inaction secured, in part, by a climate denial movement funded by some of these same corporations).

And that’s where these seemingly symbolic victories come in, from Glasgow to Lego. The profits of the fossil fuel sector, made by knowingly treating our atmosphere like a sewage dump, should not just be seen as toxic—something from which publicly minded institutions will naturally distance themselves. If we accept that those profits are morally illegitimate, they should also be seen as odious—something to which the public itself can make a claim, in order to clean up the mess these companies have left, and continue to leave, behind.

When that happens, the pervasive sense of hopelessness in the face of a crisis as vast and costly as climate change will finally begin to lift.

Naomi Klein on Climate Chaos: “I Don’t Think Baby Boomers Did This. I Think Capitalism Did.”