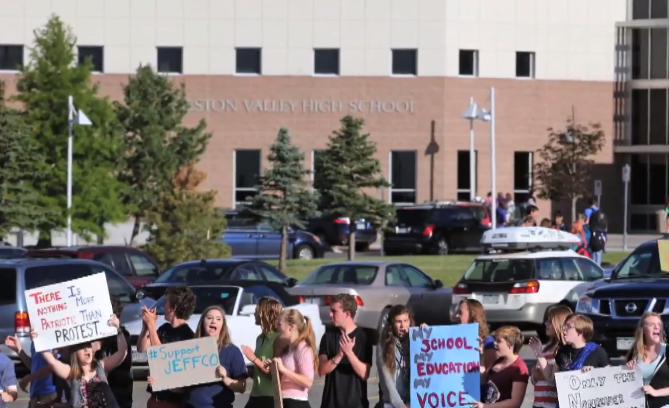 The Powerlessness of Positive Thinking

The battles over American history and censorship in Colorado are part of the longstanding cult of optimism on the Right.

The Right has a tendency to confuse patriotism with burying your head in the sand.

The culture wars are blazing again. This time, the subject is high school history. The College Board, the private company that administers the Advanced Placement exam, released a new framework for AP history classes. Conservatives reacted with fury.

A Republican National Committee resolution savaged the curricular recommendations as a “radically revisionist slant on history.” Fox News personality and possible 2016 presidential candidate Dr. Ben Carson called them so tilted to the left that “most people, when they finish that course, they’d be ready to sign up for ISIS.”

And in Jefferson County, Colorado—one of the fifty biggest school districts in the United States—the controversy has brought the teaching of high school history to a stand-still: After a new conservative majority on the school board ordered a review of the allegedly offensive materials, students walked out of class in droves, and dozens of teachers called in sick in protest. As of this writing, matters there remain in a tense standoff.

So what’s behind this impassioned outpouring? In part, the controversy evinces the right-wing antipathy to federal dictates that undercut local control, especially local control of education. Ronald Reagan, for example, in his campaign for the 1976 Republican presidential nomination, excoriated the National Education Association for working toward what he called a “national education system”—like the one imposed, a long time ago, in Germany: “They changed their academic system to suit the rule of the dictator. … When [he] said burn the books, they burned the books.”

In this spirit, because the College Board noted that the new AP framework is meant to harmonize with the Obama Administration’s national “Common Core” standards, the Republican-controlled legislature in Texas considered jettisoning AP history courses altogether, consistent with a 2013 law that prohibits the teaching of materials from the Common Core. There is also is the familiar right-wing criticism of history that allegedly slights the Great White Males in favor of emphasizing the history of women and minorities.

But there is an even more crucial factor at play here: American conservatism’s historic addiction to the power of positive thinking.

And that, above all, is what pushed conservative buttons the hardest.

The cult of optimism in education is an old impulse on the right. In 1967, the target was the eighth grade text Land of the Free by the esteemed African-American historian John Hope Franklin. Pasadena’s “Land of the Free Committee” said the book’s “negative thought models” would give our children a “guilt complex.”

Max Rafferty, the California State Commissioner of Education and a conservative Republican candidate for the U.S. Senate, said it “tear[s] our country down.” One parent risked legal action rather than let his daughter be in the same room with it.

It was the leading edge of a veritable anti-gloom movement on the Right. Two censorship crusaders from Texas, Mel Gabler and Norma Gabler (who insisted reporters identify them, in patriarchal fashion, as the “Mel Gablers”), soon became household names. They advised their fellow 1970s culture warriors to be on the lookout for the liberal secularists’ most dangerous weapon: books with a “morbid,” “negative,” or “depressing tone.” (One particular target: Edgar Allen Poe’s story “The Cask of Amontillado.”)

Acolytes availed themselves of a clause in the Supreme Court’s anti-pornography Miller v. California decision giving municipalities the right to ban expression violating “contemporary community standards”; thus armed, a Ridgefield, Connecticut, school board banned Mike Royko’s biography of Mayor William J. Daley, Boss, explaining that it “portrays politics in an un-American way and we don’t want our kids to know about such things as corrupt politics”—a particularly neat example of the right-wing tendency to confuse patriotism with burying your head in the sand.

In North Dakota, a short story anthology with dark selections by Faulker and Hemingway and James Dickey’s Deliverance were fed to a bonfire, the teacher who assigned them thrown into jail. Kurt Vonnegut’s satire on the America’s firebombing of Dresden was such a bête noire nationwide that it made a cameo in the 1984 movie Footloose. A parent approaches the fundamentalist minister played by Jon Lithgow: “Reverend, we have a little problem. I heard the English teacher is planning to teach that book… Slaughterhouse Five. Isn’t that an awful name?”

Liberals—including those who might not even self-identify as such, since a vision of patriotism that insists on civic self-criticism is indeed ineluctably liberal, just as the conservatives charge—counter with the civic value of history that provides “a full measure of truth about our promises and our problems as Americans” (the president of the California Council of Social Studies, speaking in 1967), asking questions like, “Does that mean we’re going to eliminate slavery from class discussions, because that wasn’t a particularly positive time in our history?” (Jefferson County’s PTA president, just last month).

Well, that sounded like a good idea last year to a mother in Fairfax County, Virginia, Laura Murphy, whose son took home a novel he called “disgusting and gross. It was hard for me to handle. I gave up on it.”

The book was Nobel Prize winner Toni Morrison’s Beloved, a discomfiting text that concludes with an escaped slave murdering her two-year-old daughter rather than allow herself to be recaptured.

The school’s English department responded eloquently that the discomfort was the whole point: “Reading and studying books that expose us, imaginatively and safely, to … trouble steels our souls to pull us through our own hard times and leads us to a greater empathy for the plight of our fellow human beings.”

Liberals prevailed in that particular battle: Beloved stayed in the curriculum. But the underlying war will continue. Because whistling past the graveyard has become as much a part of the right wing’s political religion as, well, religion.

Which is funny. I thought conservatives were supposed to believe in America. Don’t they believe it’s strong enough to teach our kids how to think like grownups?