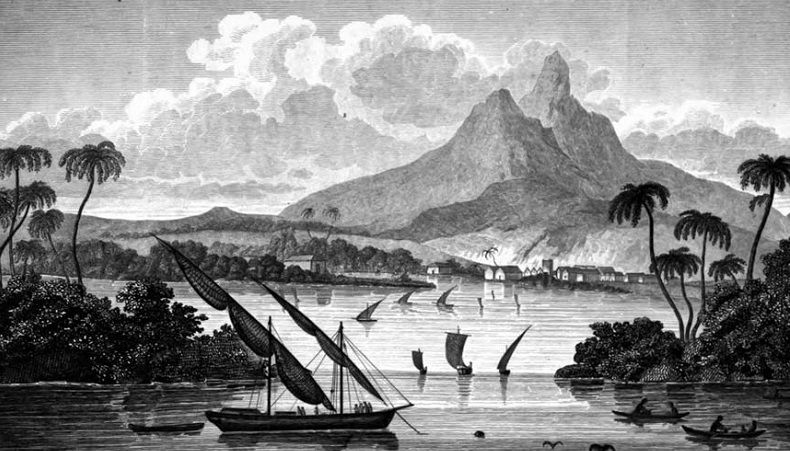 View of the port in Gregor MacGregor’s mythical Central American colony of Poyais. (Library of Congress via Hathitrust.org)

Sleight of the Invisible Hand

Stock market fraud is as old as the stock market.

Every phase of our market society’s expansion was shaped by deceit, fraud and mountebankery.

In the panoply of myths most cherished by apostles of capitalism from Adam Smith to Milton Friedman to Tyler Cowen, second only to the rational market is the moral market. Under this catechism of the market faith, the act of bringing commerce to new ports of call serves to lift all parties into a more civilized mindset—more tolerant, more liberty-conscious, more mindful of our shared humanity, and more averse to business-quashing geopolitical conflicts.

But the history of Western capitalism has trended in a different direction. As much as the Enlightenment sages and their neoliberal successors have insisted otherwise, the spread of market values has been a breeding ground of fraud and chicanery. Indeed, the smoothest path to paper wealth has proved, in moral terms, to be the crookedest.

As Ian Klaus explains in his engaging new book, Forging Capitalism: Rogues, Swindlers, Frauds, and the Rise of Modern Finance, every phase of our market society’s expansion was shaped by deceit, fraud and mountebankery. Focusing on the British investment scene of the 19th century—the vanguard of capital consolidation that would serve as the model for the later, far larger commercial revolution in America—Klaus assembles a gallery of rogues who consistently defied the purported civilizing merits of sober global investment.

In February 1814, for example, 13 years after the London Stock Exchange was founded, the market was sent into frantic convulsions by a roving imposter in German military garb who walked into a pub in Dover to announce the death of Napoleon Bonaparte. England was then at war with the Emperor of France, and a report of his death could be counted on to dramatically move markets—much as, say, the specter of an Ebola outbreak does in today’s financial world. It quickly became clear that the little tyrant was still very much alive and the phony messenger was in cahoots with an esteemed British naval hero, Lord Thomas Cochrane, who managed, amid the chaos of the day’s trading, to fend off a disastrous £10,000 loss looming over his own portfolio.

But, the moral reckonings of the market being what they are, Cochrane’s disgrace was short-lived. He led several successful naval attacks in Latin America and, in the 1830s, he acceded to his father’s earldom; by 1847, Queen Victoria had reinstated the convicted fraudster’s knighthood.

Clearly things were not going according to the Adam Smith script. Each new outbreak of fraud would call down new bureaucratic measures designed to curtail risk and verify the authenticity of traders—until these systems, too, fell victim to ingenious fraudsters. Still, the lords of finance were determined to ensure that self-regulation would remain the order of the day, and a series of inquiries by Parliament came to naught.

And so continued a series of British stock scandals. There was Gregor MacGregor, a Scot who touted investments in nonexistent mines in the mythical Central American colony of Poyais. There was the pioneer of insurance fraud, Walter Watts—a modest insurance clerk by day, and a sybaritic (and much loved) impresario of the London theater scene by night. There was Harry Marks, the transplanted Yank editor of the Financial News, who used the paper to promote another fraudulent mining investment, this time in South Africa.

But by the time of Marks’s trial in 1889, the speculative puffing and collapsing of asset bubbles that had scandalized British business interests during the Cochrane affair had become the status quo. It was, in Klaus’s words, an age of “opaque, cavalier financial capitalism.” And sure enough, Marks weathered his disgrace with minimal damage, and his paper continued to serve as an authoritative investment bible.

Klaus doesn’t draw parallels between these studies in British fraud and the grotesqueries that stoked the 2008 financial meltdown. But for every Thomas Cochrane, Walter Watts or Gregor MacGregor, we have a Bernie Madoff, Angelo Mozilio or Sandy Weil. Then there’s that shameless huckster Alan Greenspan, who masqueraded as a competent central banker and insisted, much like Harry Marks, that fraud, strictly speaking, was simply unthinkable in his unruffled vision of pure investor transparency. We’re still waiting for the market to bring him to justice, too.