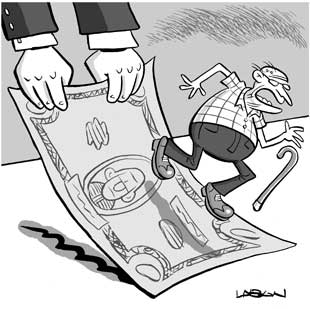 November 2 was just the beginning of the bad news. Two days after the election, before most of us had even recovered, President Bush told the country that he would use his “political capital” to privatize Social Security.

This declaration of war was smart strategy. Social Security is by far the country’s most important and successful social program. Over the last seven decades it has provided a decent retirement to tens of millions of workers and their spouses. It also provides disability and survivor insurance to almost the entire working population—nearly 2 million children are currently receiving survivors’ benefits. For these reasons, Social Security enjoys enormous public support, regularly getting approval ratings of close to 90 percent in public opinion surveys.

If Bush is going to privatize Social Security, he must move hard and fast—as he has. And if we are going to save it, progressive forces will have to mobilize quickly.

The key to stopping this drive for privatization will be to educate the public about the basic facts on Social Security. For two decades, the right has been working overtime to undermine confidence in the program. Groups like the Concord Coalition have been telling the country that Social Security is a Ponzi scheme that will inevitably collapse once the baby boomers retire.

The fearmongers have been largely successful. Many workers, especially those under 40, are convinced that Social Security will be bankrupt before they see a dime in benefits. For these people, the promise of a private account sounds pretty good, since they don’t believe they will ever get anything from Social Security anyhow.

Progressives must use every means available to tell people that they have been lied to about Social Security. The program is unambiguously healthy. The Social Security trustees’ report (available on the Social Security Administration’s Web site) shows that the program can pay every penny of benefits through the year 2042, with no changes whatsoever.

Even after 2042, the trustees’ projections show that while the program won’t have enough to pay currently scheduled benefits—which are approximately 40 percent higher than current benefits—it will still have enough money to pay benefits higher than those that current retirees receive, even when indexed for inflation. The changes necessary to allow full scheduled benefits to be paid throughout Social Security’s 75-year planning period are smaller than the changes to Social Security—increased Social Security taxes and benefit cuts—that were made in each of the decades from the ’50s through the ’80s.

Last June, the nonpartisan Congressional Budget Office (CBO) made an independent assessment of Social Security’s finances and concluded that the program could pay all benefits even longer—until 2052—with no changes whatsoever. According to the CBO, the changes needed to keep the program fully funded through its 75-year planning period are less than half as large as the Social Security tax increases put in place in the ’80s.

Just to be clear, neither of these projections is based on a rosy scenario about the future. In fact, the Social Security trustees assume that over the next 75 years the economy will experience the slowest pace of productivity growth in its history—there’s no “new economy” in this story.

In short, the claims that Social Security is in imminent danger of bankruptcy are just like the claims about Saddam Hussein’s weapons of mass destruction—politically motivated lies.

Are private accounts a remedy?

The Bush privatization plan proposes to couple newly created private accounts with large cuts in current basic Social Security benefits. Under this scheme each retiree will get benefits from both these sources.

No privatizer has yet been able to document in numbers how the privatizers will get their projected stock returns (showing annual dividend payouts and capital gains). When it comes to simple arithmetic, involving trillions of dollars of workers’ Social Security money, the privatizers flunk the test.

While private accounts won’t do much to increase returns, they will certainly increase risk and add hugely to administrative costs. A worker who happens to retire during a market slump will see much of their benefit disappear. In countries that already have private accounts, like England and Chile, the administrative fees are between 15 and 20 percent of annual benefits. By comparison, the administrative costs of Social Security are less than 0.6 percent of annual benefits. In addition, retirees who want to buy an annuity (an inflation-protected life-long annual payout, like that provided by Social Security) will typically have to pay a fee of at least 10 percent of their private account to convert their account to an annuity.

The bottom line is that under Bush’s proposal, workers can expect to see considerably reduced benefits, since private accounts will not come close to making up for the accompanying benefit cuts. Under the plan that would provide the basis for Bush’s privatization scheme, an average 15-year-old today who retires in 2055 will lose more than 35 percent ($160,000) of his currently scheduled benefit over the course of his retirement. He stands to gain back less than one-third of this $160,000 loss from a private account.

Social Security privatization does not look good for most workers because they can expect large benefit cuts, but it is likely to be especially bad for those in lower-income brackets. While Bush’s privatization plan actually provides modest benefit increases for low-end workers, it also puts in place a structure that will force the middle class to depend less on the traditionally defined Social Security benefits and more on private retirement accounts.

Bush’s plan gradually reduces the size of the traditional benefit received by middle-class workers, while increasing the size of private accounts until finally the defined Social Security benefit will become almost irrelevant to anyone but the poor. Under the Bush plan, a child born today who earns an average wage during his working lifetime would get a defined benefit equal to just 10 percent of his wage when he retires. As the middle class depends less and less on Social Security, the benefits pledged to the poor would enjoy about as much political support as welfare does today. Now that would really be a “Mission Accomplished”!

The privatization of Social Security can be stopped. Bush may no longer have to worry about reelection, but members of Congress do. There can be no more important battle. If Bush is stopped on Social Security, then his political capital will have been spent, and he will be the lamest of lame ducks. On the other hand, if he wins … well, that’s not going to happen.