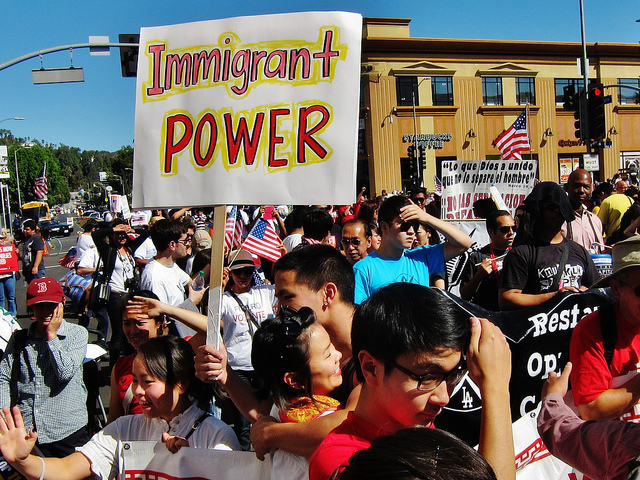 Should We Trust Him? The Mixed Results of Obama’s Past Immigrant Relief Measures

Past executive actions for undocumented immigrants under the president’s administration haven’t always delivered.

The largely positive reviews of the DACA program, as well as the large number of immigrants who applied for it and high percentage (86) who were accepted, stand in stark contrast to the impact of the Morton memo, a June 2011 prosecutorial discretion directive.

In a prime-time address shunted by major networks but watched breathlessly by immigration activists around the country, President Obama announced a series of executive actions his administration will undertake to change the nation’s immigration system, ranging from increasing investment in border enforcement to offering 5 million more immirgrants the chance to avoid deportation.

The announcement stopped short of halting all deportations, a long-standing demand of the immigrant rights movement. Instead, the executive action will allow the parents of American citizens and those who have been in the U.S. for more than five years the chance to obtain a work permit and a three-year reprieve from deportation by paying any outstanding taxes and passing a background check. The order will also remove the age restriction of the Deferred Action for Childhood Arrivals (DACA), a 2012 program offering immigrants brought to the country as children and born after 1981 a work permit and temporary relief from deportation.

The Secure Communities program, a much-maligned information-sharing program between the FBI, Immigration and Customs Enforcement (ICE) and localities that activists have accused of ensnaring immigrants who had little or minor legal infractions, will be replaced by a newly created “Priority Enforcement Program,” which aims to also use biometric data to focus on deporting immigrants with criminal offenses.

“Obama is well within his legal power to direct the Department of Homeland Security to steer immigration officials in one direction or another,” said Cesar Cuauhtemoc Garcia Hernandez, a law professor at the University of Denver’s Sturm College of Law and a blogger at crimmigration.com. “The relief from deportation for three years [for people brought to the United States as children and parents] stands to make a huge difference.”

DACA has been in effect since August 2012 and may be the most popular immigration initiative of the Obama presidency so far. The program suspends the deportations of undocumented immigrants who were brought to the United States as children and born after 1981, and allowed them to apply for a two-year work permit. More than 550,000 young people had been accepted into the program as of March 2014.

A key aspect of DACA was that it didn’t offer any permanent change in the immigration status of a recipient. The memorandum also had specific requirements for who was eligible: those between age 15 and 30, were brought to the U.S. before the age of 16, and have a high school diploma or GED. Assessing the initiative two years later, advocates said it left behind many young people who, if they had the ability to get a better-paying job under a work permit, could meet the missing requirement of having a GED or high school diploma.

The largely positive reviews of the DACA program, as well as the large number of immigrants who applied for it and high percentage (86) who were accepted, stand in stark contrast to the impact of the Morton memo, a June 2011 prosecutorial discretion directive by then-ICE director John Morton.

The memo called on immigration personnel to focus their enforcement efforts on immigrants who posed public safety threats. It offered several options for “prosecutorial discretion,” including cancelling a notice to appear in immigration court, focusing enforcement on violations such as felonies or reentry violations following a deportation, and deciding whether to detain an individual based on whether they had been arrested in the past or have strong ties in the United States.

While other directives had made similar proclamations directing ICE agents to focus their enforcement attention on immigrants with criminal histories, the Morton memo was unique in explicitly stating the responsibility of ICE personnel to, among other obligations, consider prosecutorial discretion throughout their dealing with an immigrant’s case—even if an individual had not requested discretion. The memo also mandated a plan to review all deportation cases before immigration courts, with the aim of stopping the deportation of immigrants not within ICE’s stated priorities for removal: individuals who had committed two or more felonies or a single aggravated felony.

Essentially, the Morton memo was meant to reduce the number of immigrants with minor or no criminal complaints who ended up in deportation proceedings when stopped during a traffic arrest or other encounters with local police.

Together, these initiatives aimed to ease some of the burden of harsh immigration enforcement policies on Latino communities, who were a significant voting bloc in electing Obama in 2008, while avoiding the political hurdles of passing immigration reform through Congress. But in reality, only a fraction of cases in immigration court were closed based on prosecutorial discretion: 6.8 percent as of August 2014, according to the Transactional Records Access Clearinghouse, a data collection project based at Syracuse University.

And as of fiscal year 2013, the majority of immigrants deported by the Obama administration still had either no criminal offenses or had been arrested for a minor offense like a traffic violation—an area that was not within ICE’s stated list of priorities for deportation.

Three years since the directive, while announcing his plan for the next executive action in November, Obama admitted in a statement, “We’re deporting people we shouldn’t be deporting.”

Deep into his second term, the gap between the Obama administration’s stated policies and immigrant communities’ lived reality has led to skepticism over the promise of executive action this time. A group of immigrants held a civil disobedience action on November 18 in Chicago in which they presented themselves to immigration authorities, saying they wanted prosecutorial discretion applied to their case and were unwilling to wait for Obama to issue his next action.

“If ICE isn't wasting time violating our rights while the President delays, neither will we wait another minute to defend them,” said Rosi Carrasco, an immigration activist who attended the meeting with ICE. “We won't stand for one more rumor or one more delay. All of us deserve relief and we deserve it now. ”

The National Day Labor Organizing Network (NDLON), a national umbrella-group for organizations working to improve the lives of the mostly immigrant workforce of day laborers, released a report in October titled “Destructive Delay,” highlighting the bleak reality faced by immigrant communities while they awaited legislative change. This included targeted operations by ICE, sometimes working with local police, that terrorized vulnerable communities and often ended up deporting people who were not the operations’ intended targets, along with tactics targeting immigrants at parole hearings or even outside mental health or substance abuse counseling sessions.

The expansion of immigration authorities into parole offices or other judicial settings means that even with changes like an expansion of DACA, deportations could still continue apace without a more expansive legislative reform that also halts the deportation of people with criminal records, the report said. “It’s like someone eating all the ice cream in the freezer on Sunday knowing they’re going on a diet on Monday,” said an unnamed organizer quoted in Destructive Delay.

Immigration authorities themselves have said that changes in immigration law, and especially the movement in more than 100 localities to refuse to honor ICE requests to detain undocumented immigrants arrested for non-immigration charges, have forced them to find new ways to deport people, such as the tactics detailed in NDLON’s report.

“While it’s true that jurisdictions not honoring ICE detainers has resulted in an increase of fugitive operations in the field, the agency is focused, first and foremost, on the arrest and removal of convicted criminal individuals who pose the greatest threat to public safety,” said a statement from Immigration and Customs Enforcement.

Another issue highlighted in the Destructive Delay report—and which remains an open question for any executive action the president might issue—is what it would take to make sure any directives from the Obama administration are implemented. The report accuses ICE of having very little accountability between its national offices and local headquarters and says directives from upper offices take weeks to trickle down or are ignored.

“There has been a divide between DHS headquarters, what DHS is saying and what they are in fact doing,” says Hernandez, the attorney. “Prosecutorial discretion was the big development in the Obama administration where the field-level officials were extremely reluctant to use their authority.”

ICE agents sued the heads of the Department of Homeland Security, then-Secretary Janet Napolitano, and ICE director Morton, in August 2012 arguing that enforcing DACA and prosecutorial discretion prevented them from doing their job and enforcing immigration laws.

The Priority Enforcement Program, said Hernandez, was nothing new from a legal perspective, in terms of directing enforcement activities’ focus. But to make sure it succeeds, he said, the onus will be on the Obama administration to make sure the immigration authorities working with officers actually enforce the directive, which is expected to come with a pay raise for ICE officers.

“They have to spend a good amount of attention making sure that their field officers are going to comply with the president’s orders,” says Hernandez.

At a viewing of Obama’s immigration speech on Thursday night in Chicago held by a local activist group called Organized Communities Against Deportations, there were mixed feelings about the executive action. Genaro Hernandez, who says he has been in the United States without papers since 1997, was arrested while driving without a license in high school and placed into deportation proceedings.

Genaro is excited that his father will benefit from the changes in executive action. But as for himself and the rest of his family, said Genaro, “it’s just not enough to help us too.”