When Green Jobs Come at the Expense of Unions

A declining Rust Belt town turned to wind power—and away from organized labor.

NEWTON, IOWA — The one-story wind-turbine factory looks unassuming from the outside, dwarfed by the vast cornfield across the street. But walk onto the factory floor and the scale of its ambition — to pull power from the very air — becomes clear. Blades lie gleaming in different stages of production as workers in white jumpsuits stride purposefully across the floor.

In 2010, 60 Minutes dubbed Newton the most ​“broken” town in America. Today, the town is being heralded as ​“back on its feet” thanks to a booming green economy.

Photojournalist Michelle Kanaar and I arrived in Newton in May to cover this economic miracle. During a tour of the wind turbine factory, owned by TPI Composites Inc., management was welcoming — and candid — as they suited us up in safety goggles and orange vests and discussed the difficulties of bringing a new industry to town. We were impressed. Then, without missing a beat, one of the representatives expressed TPI’s ​“pride” in being non-union.

“We’re very receptive to the needs of our associates. … Our doors are always open,” said another manager. Laughing, she added, ​“They’re probably very spoiled.”

Twenty years ago, you couldn’t throw a dart in Newton without hitting a union worker. For a century, the biggest business in town was the Maytag plant, where, under a United Automobile Workers (UAW) contract, workers could expect to work for three decades and retire early with a full pension. At its height in the early 2000s, Maytag employed 4,000 people in the town of 15,000, according to U.S. Department of Energy estimates.

Dennis Young, 38, followed in the footsteps of his father and grandfather when, a few years after high school, he got a job on the Maytag assembly line. But in 2003, the company began downsizing its Newton facilities and he was laid off. Months of suspense for the town ended in shock when, in March 2006, Maytag sold to Whirlpool, and Whirlpool announced it would close all Newton operations. During the next several years, unemployment spiked to nearly 10 percent.

Desperate town officials saw Newton following an all too familiar path — a Rust Belt town hollowed out by the loss of manufacturing. So the town used financial incentives, as well as the lures of Maytag’s former infrastructure and workforce, to bring in TPI and a windmill tower maker, Trinity Structural Towers.

When TPI opened its doors in 2007, many former Maytag workers applied. But the plant was soon plagued with high turnover. Current and former employees describe poor working conditions: Broken air conditioning, a hot shop floor — typically over 80 degrees — and air heavy with chemicals and particulates that irritated some workers’ skin and lungs. To fill the jobs, TPI began busing in workers from nearby Des Moines, Ottumwa and Marshalltown.

In 2013, a handful of workers began an effort to unionize TPI under the International Brotherhood of Electrical Workers. The first vote was unsuccessful. Young, who started working at TPI in 2013, didn’t vote in that election because he wasn’t sure a union was necessary. Over the next two years, he saw enough — firings over seemingly small infractions, he says, and capricious and unresponsive management — to change his mind. When workers started another union campaign in 2015, meeting in a secluded corner of the 40-acre Maytag Park, Young was with them.

Both union efforts met stiff resistance from the company. In 2014, TPI held a union avoidance training and hired a human resources director who began calling in employees associated with the unionization effort, including Young, and accusing them of rule violations. In November 2015, Young was fired. He says, ​“It’s a pretty bad feeling when you get fired before Christmas, and you have five kids.”

The National Labor Relations Board ruled the firing to be illegal retaliation. Young waived his right to reinstatement and received a financial settlement from TPI.

TPI spokesperson Michael Traetow says that the company is not ​“anti-union” but that it ​“urge[s] all associates to be aware of the facts of being union-free, which allows us to work together as a team. … [Associates] enjoy opportunity for career development and advancement, job satisfaction, good working conditions, and equal opportunity.”

Young finds it ironic that TPI is non-union, considering that ​“wind energy hitches itself to the Democratic political movement in Washington.”

Workers inside the plant have not given up yet. With the help of UAW, they have begun their third union campaign. 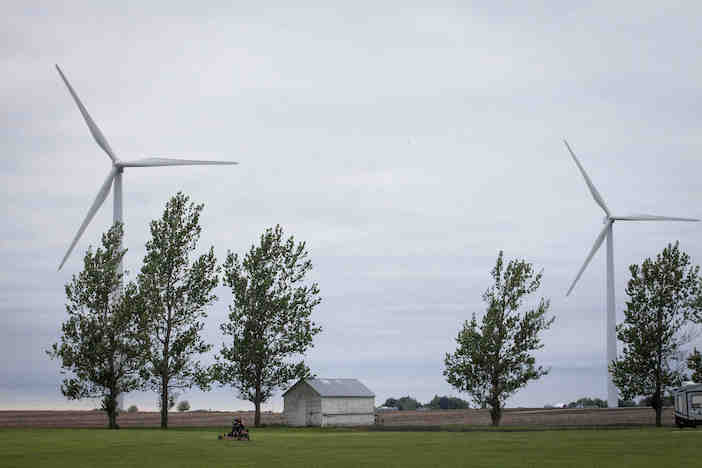 Wind turbines pictured on May 18, 2017 in central Iowa. (Photo by Michelle Kanaar)

This story was produced through a fellowship with the Social Justice News Nexus at the Medill School of Journalism, Media, Integrated Marketing Communications at Northwestern University, with support from the Fund for Environmental Journalism.

See the options
Yana Kunichoff is a Chicago-based investigative journalist and documentary producer. Her work has appeared in the Guardian, Pacific Standard and the Chicago Reader, among others. She can be reached at yanakunichoff at gmail​.com.
Have thoughts or reactions to this or any other piece that you'd like to share? Send us a note with the Letter to the Editor form.
More articles by Yana Kunichoff
Labor
Second City Has Been a Comedy Mecca for Decades. Now Its Workers Are Voting to Form a Union.
Feature
Sanctuary in the Streets: How New Alliances Are Revitalizing a Past Movement
A revitalized sanctuary movement is spreading to unexpected places, resisting the threats posed by Trump’s presidency.
Feature
Russian Dissident Masha Gessen on Why Outrage Is Not Optional
She puts her hopes in civil society and a vibrant public sphere.
Similar articles
Dispatch
A Caucus for Black Youth
Eli Day
Dispatch
Vermonters Marched 65 Miles for Climate Justice
Vermont could become the first state to ban future fossil fuel infrastructure
Olivia Box
Dispatch
When the “Cure” for Homosexuality Is Torture
Ecuador led the way on LGBTQ rights, but abusive “gay cure” clinics persist.
Kimberley Brown
Join our newsletter
Fearless journalism, emailed straight to you.
Subscribe and Save 66%