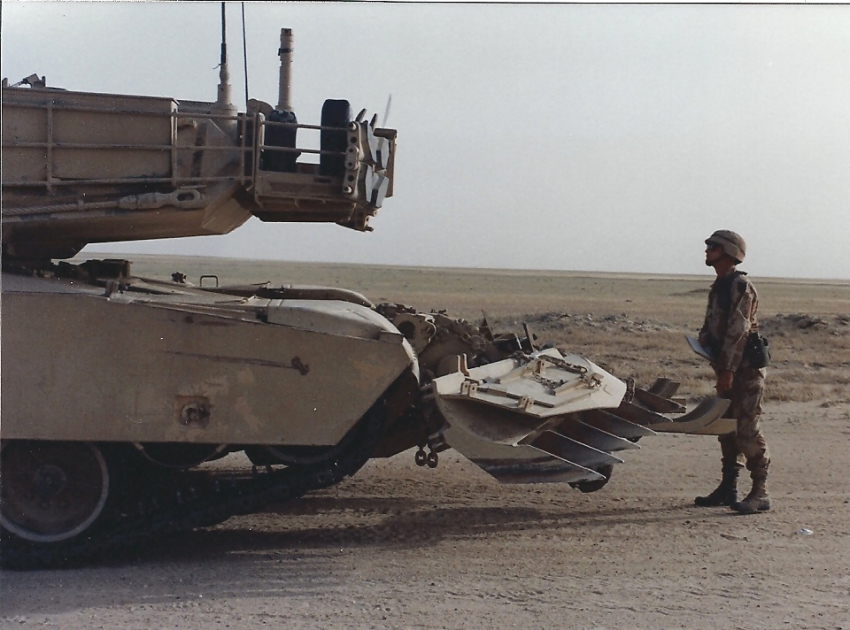 Mine plow used for breach of Iraqi Defense. (airborneshodan / Flickr)

In Iraq and Beyond, U.S. Foreign Policy is Based On Complete Fallacies

How can we ever hope for a sane foreign policy in the Middle East when America’s bedrock assumptions about the region are completely wrong?

The “peace process” is a fiction. Why should the United States persist in pretending otherwise?

This story first appeared at TomDispatch.

“Iraq no longer exists.” My young friend M, sipping a cappuccino, is deadly serious. We are sitting in a scruffy restaurant across the street from the Cathedral of St. John the Divine on Manhattan’s Upper West Side. It’s been years since we’ve last seen each another. It may be years before our paths cross again. As if to drive his point home, M repeats himself: “Iraq just doesn’t exist.”

His is an opinion grounded in experience. As an enlisted soldier, he completed two Iraq tours, serving as a member of a rifle company, before and during the famous Petraeus “surge.” After separating from the Army, he went on to graduate school where he is now writing a dissertation on insurgencies. Choosing the American war in Iraq as one of his cases, M has returned there to continue his research. Indeed, he was heading back again that very evening. As a researcher, his perch provides him with an excellent vantage point for taking stock of the ongoing crisis, now that the Islamic State, or I.S., has made it impossible for Americans to sustain the pretense that the Iraq War ever ended.

Few in Washington would endorse M’s assertion, of course. Inside the Beltway, policymakers, politicians, and pundits take Iraq’s existence for granted. Many can even locate it on a map. They also take for granted the proposition that it is incumbent upon the United States to preserve that existence. To paraphrase Chris Hedges, for a certain group of Americans, Iraq is the cause that gives life meaning. For the military-industrial complex, it’s the gift that keeps on giving.

Considered from this perspective, the “Iraqi government” actually governs, the “Iraqi army” is a nationally representative fighting force, and the “Iraqi people” genuinely see themselves as constituting a community with a shared past and an imaginable future.

Arguably, each of these propositions once contained a modicum of truth. But when the United States invaded Iraq in 2003 and, as then-Secretary of State Colin Powell predicted, broke the place, any merit they previously possessed quickly dissipated. Years of effort by American occupiers intent on creating a new Iraq out of the ruins of the old produced little of value and next to nothing that has lasted. Yet even today, in Washington the conviction persists that trying harder might somehow turn things around. Certainly, that conviction informs the renewed U.S. military intervention prompted by the rise of I.S.

So when David Ignatius, a well-informed and normally sober columnist for the Washington Post, reflects on what the United States must do to get Iraq War 3.0 right, he offers this “mental checklist”: in Baghdad, the U.S. should foster a “cleaner, less sectarian government”; to ensure security, we will have to “rebuild the military”; and to end internal factionalism, we’re going to have to find ways to “win Kurdish support” and “rebuild trust with Sunnis.” Ignatius does not pretend that any of this will be easy. He merely argues that it must be—and by implication can be—done. Unlike my friend M, Ignatius clings to the fantasy that “Iraq” is or ought to be politically viable, militarily capable, and socially cohesive. But surely this qualifies as wishful thinking.

The value of M’s insight—of, that is, otherwise intelligent people purporting to believe in things that don’t exist—can be applied well beyond American assumptions about Iraq. A similar inclination to fantasize permeates, and thereby warps, U.S. policies throughout much of the Greater Middle East. Consider the following claims, each of which in Washington circles has attained quasi-canonical status.

For decades now, the first four of these assertions have formed the foundation of U.S. policy in the Middle East. The events of 9/11 added the fifth, without in any way prompting a reconsideration of the first four. On each of these matters, no senior U.S. official (or anyone aspiring to a position of influence) will dare say otherwise, at least not on the record.

Yet subjected to even casual scrutiny, none of the five will stand up. To take them at face value is the equivalent of believing in Santa Claus or the Tooth Fairy—or that John Boehner and Mitch McConnell really, really hope that the Obama administration and the upcoming Republican-controlled Congress can find grounds to cooperate.

Let’s examine all five, one at a time.

The Presence of U.S. Forces: Ever since the U.S. intervention in Lebanon that culminated in the Beirut bombing of October 1983, introducing American troops into predominantly Muslim countries has seldom contributed to stability. On more than a few occasions, doing so has produced just the opposite effect.

Iraq and Afghanistan provide mournful examples. The new book “Why We Lost” by retired Lieutenant General Daniel Bolger finally makes it permissible in official circles to declare those wars the failures that they have been. Even granting, for the sake of argument, that U.S. nation-building efforts were as pure and honorable as successive presidents portrayed them, the results have been more corrosive than constructive. The I.S. militants plaguing Iraq find their counterpart in the soaring production of opium that plagues Afghanistan. This qualifies as stability?

And these are hardly the only examples. Stationing U.S. troops in Saudi Arabia after Operation Desert Storm was supposed to have a reassuring effect. Instead, it produced the debacle of the devastating Khobar Towers bombing. Sending G.I.’s into Somalia back in 1992 was supposed to demonstrate American humanitarian concern for poor, starving Muslims. Instead, it culminated in the embarrassing Mogadishu firefight, which gained the sobriquet Black Hawk Down, and doomed that mission.

Even so, the pretense that positioning American soldiers in some Middle East hotspot will bring calm to troubled waters survives. It’s far more accurate to say that doing so provides our adversaries with what soldiers call a target-rich environment—with Americans as the targets.

The Importance of the Persian Gulf: Although U.S. interests in the Gulf may once have qualified as vital, the changing global energy picture has rendered that view obsolete. What’s probably bad news for the environment is good news in terms of creating strategic options for the United States. New technologies have once again made the United States the world’s largest producer of oil. The U.S. is also the world’s largest producer of natural gas. It turns out that the lunatics chanting “drill, baby, drill” were right after all. Or perhaps it’s “frack, baby, frack.” Regardless, the assumed energy dependence and “vital interests” that inspired Jimmy Carter to declare back in 1980 that the Gulf is worth fighting for no longer pertain.

Access to Gulf oil remains critically important to some countries, but surely not to the United States. When it comes to propping up the wasteful and profligate American way of life, Texas and North Dakota outrank Saudi Arabia and Kuwait in terms of importance. Rather than worrying about Iraqi oil production, Washington would be better served ensuring the safety and well-being of Canada, with its bountiful supplies of shale oil. And if militarists ever find the itch to increase U.S. oil reserves becoming irresistible, they would be better advised to invade Venezuela than to pick a fight with Iran.

Does the Persian Gulf require policing from the outside? Maybe. But if so, let’s volunteer China for the job. It will keep them out of mischief.

Arab Allies: It’s time to reclassify the U.S. relationship with both Egypt and Saudi Arabia. Categorizing these two important Arab states as “allies” is surely misleading. Neither one shares the values to which Washington professes to attach such great importance.

For decades, Saudi Arabia, Planet Earth’s closest equivalent to an absolute monarchy, has promoted anti-Western radical jihadism—and not without effect. The relevant numbers here are two that most New Yorkers will remember: 15 out of 19. If a conspiracy consisting almost entirely of Russians had succeeded in killing several thousand Americans, would U.S. authorities give the Kremlin a pass? Would U.S.-Russian relations remain unaffected? The questions answer themselves.

Meanwhile, after a brief dalliance with democracy, Egypt has once again become what it was before: a corrupt, oppressive military dictatorship unworthy of the billions of dollars of military assistance that Washington provides from one year to the next.

Israel: The United States and Israel share more than a few interests in common. A commitment to a “two-state solution” to the Palestinian problem does not number among them. On that issue, Washington’s and Tel Aviv’s purposes diverge widely. In all likelihood, they are irreconsilable.

For the government of Israel, viewing security concerns as paramount, an acceptable Palestinian state will be the equivalent of an Arab Bantustan, basically defenseless, enjoying limited sovereignty, and possessing limited minimum economical potential. Continuing Israeli encroachments on the occupied territories, undertaken in the teeth of American objections, make this self-evident.

It is, of course, entirely the prerogative—and indeed the obligation—of the Israeli government to advance the well being of its citizens. U.S. officials have a similar obligation: they are called upon to act on behalf of Americans. And that means refusing to serve as Israel’s enablers when that country takes actions that are contrary to U.S. interests.

The “peace process” is a fiction. Why should the United States persist in pretending otherwise? It’s demeaning.

Terrorism: Like crime and communicable diseases, terrorism will always be with us. In the face of an outbreak of it, prompt, effective action to reduce the danger permits normal life to continue. Wisdom lies in striking a balance between the actually existing threat and exertions undertaken to deal with that threat. Grown-ups understand this. They don’t expect a crime rate of zero in American cities. They don’t expect all people to enjoy perfect health all of the time. The standard they seek is “tolerable.”

That terrorism threatens Americans is no doubt the case, especially when they venture into the Greater Middle East. But aspirations to eliminate terrorism belong in the same category as campaigns to end illiteracy or homelessness: it’s okay to aim high, but don’t be surprised when the results achieved fall short.

Eliminating terrorism is a chimera. It’s not going to happen. U.S. civilian and military leaders should summon the honesty to acknowledge this.

My friend M has put his finger on a problem that is much larger than he grasps. Here’s hoping that when he gets his degree he lands an academic job. It’s certain he’ll never find employment in our nation’s capital. As a soldier-turned-scholar, M inhabits what one of George W. Bush’s closest associates (believed to be Karl Rove) once derisively referred to as the “reality-based community.” People in Washington don’t have time for reality. They’re lost in a world of their own.

Andrew J. Bacevich is professor of history and international relations at Boston University. He has been a fellow of the Paul H. Nitze School of Advanced International Studies at Johns Hopkins University, the John F. Kennedy School of Government at Harvard University and the Council on Foreign Relations in New York.